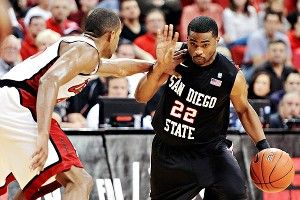 A quick Google search tells me that you’re commissioner of the Mountain West Conference, which means you’re the guy I need to talk to. Now, typically, when I write angry letters, I like to introduce myself before I air my grievances. That way it’s more personal and the recipient of the letter knows he or she is letting down a real human being with a real job, a real family, real hobbies, and a real nonexistent girlfriend. But this time around, I want to cut to the chase, so here’s all you really need to know about me: I’m a guy who had to call my cable provider and sit on hold for 30 minutes while Michael Bolton music was blasted into my ear, only to find out that if I wanted to watch the CBS Sports Network broadcast of San Diego State playing at New Mexico, my monthly bill would increase by five bucks.

“Five bucks?” you’re probably saying to yourself, as you light your cigar with a 100 euro note because it’s worth more than a Benjamin and you’re gaudy. “I made five bucks this morning before I even put my pants on. Five bucks is nothing. Quit your bitching.” Well, Mr. Commissioner, here’s the thing: Elitists like yourself probably aren’t aware, but it’s FebruANY at Subway and that five bucks should be in my large intestine right now in the form of a foot-long BMT.

Now, you tried to get more of your conference’s games on TV by creating your own network. But while I applaud you for being a pioneer, I think you really dropped the ball by not making MountainWest Sports available to cable subscribers in 22 states. Do you realize that there are tens of tens of Mountain West fans living in these states who want to see their teams play? More important, do you realize that I live in one of these states? Let’s not forget who really matters here.

As it turns out, I was able to catch Saturday’s game between UNLV and San Diego State because it was on NBC Sports Network, which is one of your sister networks and a channel I apparently get. (Even though I didn’t realize it.) But I guess I don’t understand how the Mountain West can be the fifth-best conference in America (and by far the best West Coast conference) and have a chance to get three teams into the NCAA tournament, yet I have to scroll through uncharted waters on my cable guide to find a game between two top MWC teams.

I mean, the NBC Sports Network? Don’t get me wrong; I’m as big of a Jimmy Roberts fan as you’ll find anywhere. But everyone knows that NBC Sports Network is almost exclusively for niche sports, and when they’re not showing hockey, they’re showing stuff like cycling, horse racing, and PBR. And it’s not even the good PBR that those of us living in Middle America like to throw back while we watch Larry the Cable Guy’s stand-up and yell at our kids to shut up because we couldn’t hear his last joke — it’s the Professional Bull Riders. What in God’s name is top-level college basketball doing on a network for niche sports? It’s like putting Billy Ray Cyrus videos on BET.

All I ask is that you acknowledge that you have a great basketball conference, which isn’t getting anywhere close to the national exposure it deserves. Sure, I was willing to visit the 1800s on my cable guide to watch Saturday’s 65-63 UNLV win, but just think about all the people who weren’t willing to do the same, and consequently missed out on the most entertaining basketball game with a final score in the 60s that I’ve ever seen. (I seriously mean that. UNLV and San Diego State were playing with a quick tempo and made a ton of athletic plays. I know one game isn’t exactly a huge sample size, but if it was anything like others in the conference, I’d much rather watch Mountain West basketball than Big Ten basketball, even though the Big Ten is my “home” conference, and is considered the best conference this year.) And think about the people who aren’t willing to sacrifice their BMTs for the CBS Sports Network. But most of all, think about me and how I would like to watch other games within the conference (after all, New Mexico, Colorado State, and Wyoming all have pretty good teams, too), but I can’t because I don’t have MountainWest Sports.

So please, Mr. Commissioner, find a way to get your conference’s games on channels I’m more familiar with and don’t come with an extra cost. Unless, of course, your plan all along is to make sure your teams don’t get exposure so that when the NCAA tournament rolls around, their opponents don’t think they’re that good and take them lightly because they haven’t been in the media’s spotlight during the season. If that’s the case, you’re a genius and disregard this letter. But if it’s not the case, it’s high time you pull your head out of your ass and get your conference the attention it deserves. I know it’s more complicated than just calling up ESPN and telling them to put your games on TV, but that’s why you get paid the big bucks to the point that you can’t even appreciate FebruANY.

P.S.: Your logo reminds me of the Nintendo GameCube. That’s not a compliment.