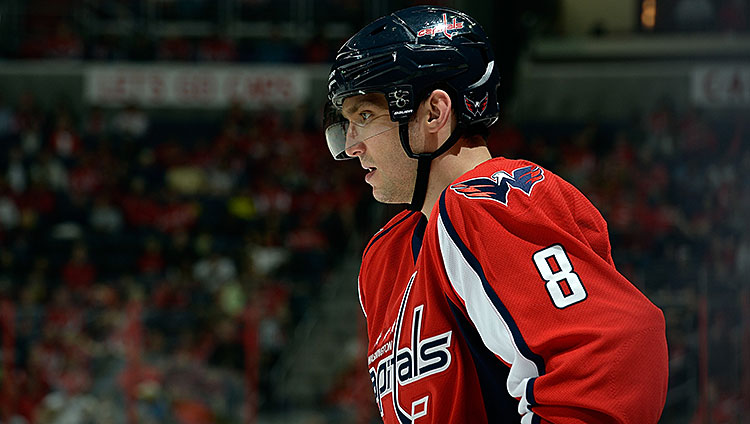 You might not know it from the reliably shirtless exuberance of his Instagram feed, but Alex Ovechkin has been having what must be a pretty rough six or so months.

In February, his Russian national team failed to even crack the medal round at the Olympic games it was hosting. (As the face of the team, Ovechkin’s backlit grin had been slapped onto every soda machine in Sochi, and for a week he haunted food courts as a gap-toothed ghost.) In April, his NHL coach, Adam Oates, called him out to the media for quitting on a play. Later that month his Washington Capitals missed the playoffs in a weak Eastern Conference. And on Monday, his fiancée, professional tennis player Maria Kirilenko, solemnly retweeted a report that the pair’s engagement had been broken off.

It wasn’t that long ago that Ovechkin was being described in GQ as “handsome in a brutal way” as he girl-hopped his way around Moscow. But in the rugged, dog years of the NHL, that was effectively forever ago — before Sidney Crosby had been concussed or the Boston Bruins had given everyone in hockey ops a fetish for good ol’ two-way shot-blockin’, Selke-winnin’ players. Ovechkin had just come off a third straight 100-plus-point campaign. He had just been anointed by a Russian gossip magazine as the country’s most eligible bachelor. He was about to star in the Winter Classic and the first season of an HBO docu-miniseries preceding it. Life was good.

Four years later, Ovechkin is coming off a 51-goal effort — the fifth time he’s hit the 50-goal plateau. (Only four other NHL players have done this five times or more in their first nine seasons: Brett Hull, Guy Lafleur, Wayne Gretzky, and Mike Bossy, who did it nine times.) But for a player who once ostentatiously celebrated by pretending to build fires on the ice, rubbing his hands for mock warmth over the kindling, recent times have lacked any spark.

“Hey, Ovi. Score.” wrote Yahoo’s Nick Cotsonika on Twitter during the 2013 playoffs. “No, wait, sacrifice. Block shots. No, wait, don’t. You’ll get hurt. Hey, Ovi. Where did your joy go?”

Until the Capitals hired Barry Trotz this summer, their last four coaches (all the ones Ovechkin has played for) joined the team as rookies behind the bench. He’s been shifted from side to side and from forward to point; he’s been “figured out” by NHL defensemen; he’s gone kaput; he’s come back; he’s dutifully played for the national team; he’s put up one of the most horrifying plus/minus stats in the whole NHL; he’s been a perfect example of why the plus/minus stat is pretty B.S.

Sometimes he gets criticized for not letting go of the puck until the Earth begins spinning backward. Sometimes he becomes the subject of one of the great sports GIFs of our time. He’s a celebrity, a cipher — carefree-seeming enough that you can project whatever onto him and it will mostly check out.

“I think a lot of things get deflected on Ovie,” Trotz told CBC’s Elliotte Friedman. “He hasn’t done a whole lot to disarm it, but he really wants to win … In other areas he needs to be a better role model; needs direction on being that. My job is to do that.”

A new coach, and now a new relationship status needed on VKontankte. Who knows if it’s sad that Ovi and Maria are no longer? The news was notable just because she seemed to be one of the few constants in his life. (And also because seeing him carrying her tennis bags was always such a delight.) Maybe it’s a good thing for both of them — the kind of breakup where you make eye contact with your friends upon hearing the news and silently exchange a finally, thank god.

Based on his social media presence, Ovechkin’s palling around with a rhythmic gymnast Putin-style and risking his neck diving recklessly into the Saint-Tropez sea. Someone should write a GQ article about this guy. Life still seems like it’s pretty good, somehow.

The Cleveland Cavaliers are increasingly confident that they will eventually complete the acquisition of Kevin Love, but the Chicago Bulls are making a late push to try to get into the trade mix for the All-Star power forward, according to sources close to the process.