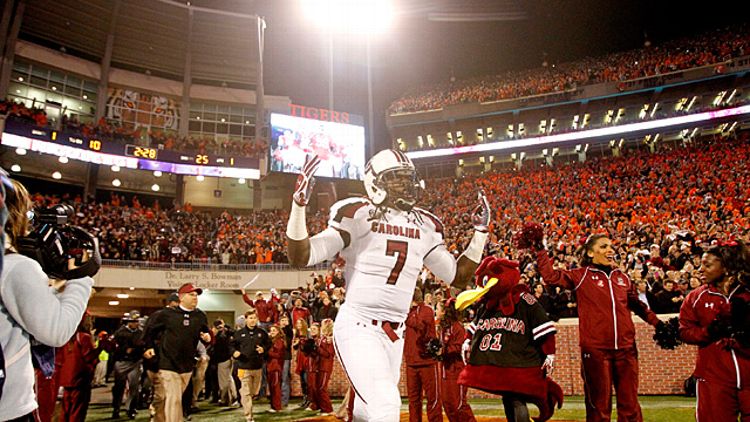 This is not relevant to the NBA or NHL playoffs or baseball or anything else in today’s news cycle, but in the spirit of Robert Mays’s countdown to the NFL season, let’s take a second to look at Jadeveon Clowney, the freak-of-nature hell-beast entering his junior season at South Carolina. Bruce Feldman has published his annual “Freaks List” at CBS Sports, and it begins with nightmarish details of Clowney, and holy shit.

A year ago, Clowney’s teammate, Devin Taylor made the Freaks List. A former state triple jump champ, Taylor was a 6-7, 267-pounder who broad-jumped almost 11 feet.

“Devin was fluid and extremely smooth. Clowney is violent,” said [South Carolina strength and conditioning coach] Joe Connolly. “Devin will play in the NFL for a long time. Clowney is more violent than anybody I’ve ever seen. There is a violence to his first step. I’ve never seen anybody with more first-step quickness than he has. He’s off the ball while the ball is still in the center’s hands. His explosiveness is unparalleled.”

“CLOWNEY IS MORE VIOLENT THAN ANYBODY I’VE EVER SEEN,” said the strength and conditioning coach.

On the sixth day God created Clowney and on the seventh day everyone was dead.

And all I’m saying is, after rereading those numbers from Feldman on Wednesday and rewatching that Michigan clip 10 or 20 times in the past 24 hours, it’s clear that Clowney should not be playing college football. Send him to the NBA for a year so he can break 50 backboards, shut down LeBron James, and end the year by shattering Blake Griffin’s clavicle and getting banned from the league for life. There is no good reason the Sacramento Kings shouldn’t draft Jadeveon Clowney in June.

Or he could mentor at-risk youth. And by “mentor” we mean stalk teenagers and stare them in the face as they consider breaking the law. Want to reduce crime and scare kids into staying in school? Pay Clowney to be a truancy officer. Or put him in the NHL, for the simple reason that the world needs a 6-foot-6 dreadlocked freak of nature roaming the ice. Or let him interrogate terror suspects. Or just broadcast a six-month version of the NFL combine where we watch him do incredible shit. I don’t know.

Any of these alternatives would be safer. Jadeveon Clowney should not be allowed to play college football, and that’s precisely why watching him play college football will be so much fun next year. He is a great white shark with dreadlocks, preying on poor, unsuspecting redshirt juniors from Vanderbilt and Kentucky. It’s horrible and unfair. But isn’t it great?

Only three more months till college football’s back.

Roster Doctor: Keeping Up With the Call-ups