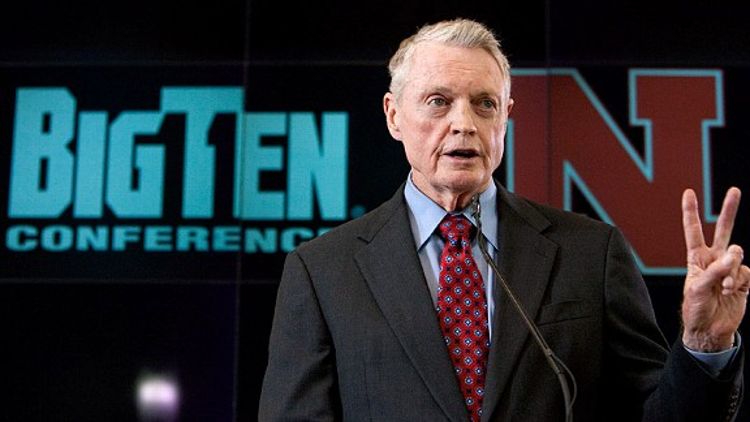 If you love football and hate reality, then make sure to tune into the Big Ten Network tonight at 9 Eastern for the latest installment in its Icons series. Tonight’s Icon is legendary Nebraska Cornhuskers coach Tom Osborne. It promises to be a fascinating appreciation of a gridiron legend who built a mighty program and maintained a sterling reputation both on and off the field. It also promises to be like that time in junior high when you said you had a girlfriend who lived in Canada, because during Osborne’s tenure (1973-1997) the Huskers were in the Big Eight and later the Big Twelve, but never played a down as a member of the Big Ten, which they joined this season. As easy as it is to get confused amidst all that repetition of the word “big,” facts are facts. And yet here we have the Big Ten Network acting as if all of Nebraska’s football history has suddenly been retroactively assumed into that of its new home conference. Unimaginative truthmongers might find this somewhat troubling. We’d go a step further: It’s vaguely Stalinist.

The term “airbrushed out of history” comes from fastidiously homicidal Russian dictator Uncle Joe’s practice of doctoring photos of the Communist Party to remove the images of people he’d had purged (i.e., killed because they pissed him off). What the Big Ten network has done here can only be called neo-Stalinism in reverse: They’re airbrushing someone into history. The network might catch at least a little flack for this contrarian maneuver, but we admire it both in its cunning incomprehensibility and its weird self-assurance that the kind of people who sit around watching documentaries on the Big Ten Network lack a basic understanding of things that happened in the Big Ten.

So, we got in touch with their programming department and asked about future film projects that might further enrich and refurbish our understanding of the Big Ten’s rich past. They were kind enough to fax over a rundown of a few things they have in the works.

The 1980s: Decade of Dominance

SYNOPSIS: Many recall the 1980s as a time of sorry under-performance by Big Ten teams in the Rose Bowl, an era in which they were routinely trounced by athletically and stylistically superior opponents from the Pac-10. These people have terrible memories. Join us as we correct the historical record. Revisit triumphant Big Ten moments such as Indiana’s 77-3 victory over UCLA in 1983, Chuck Long’s heroic 1985 comeback against Oregon, in which he threw for nine touchdowns in the final four minutes to lead the Hawkeyes to victory, and Michigan’s still-impressive 213-7 win over Washington in 1987. James Cameron directs.

SYNOPSIS: Most people know that Michigan Wolverines star center and linebacker Gerald Ford went on from Big Ten superstardom to attain further, if less impressive, renown as President of the United States of America. But do you know about some of Ford’s other historic achievements? Well, sit back and let the Big Ten Network educate you: Follow his illustrious career, from drafting the Declaration of Independence, to being the first man to walk on the moon, to discovering fire, to dancing on a car in a Whitesnake video, to nearly winning the Triple Crown in two consecutive years. It’s been quite a ride for Gerald Ford, Historic Man.

Seamus in the Huddle

SYNOPSIS: Americans are all too familiar with the long struggle of Irish-Americans to attain acceptance in mainstream American society. Even today, many social clubs and professional fields remain closed to them — including every college football conference except the Big Ten. This six-hour Ken Burns documentary examines the sorry history of anti-Irish exclusion in the Big 12, Pac-12, Big East, ACC, and SEC, while celebrating our own league’s inclusive enthusiasm for any and all sons of Erin (even ones who smell like old bacon).

Marcus Allen Was Really on the Gophers

SYNOPSIS: Football fans will not soon forget the image of Heisman-winning running back Marcus Allen streaking across their TV screens in a maroon-and-gold uniform. Strangely, many remember him as playing for USC. What morons! He was totally on the Gophers, and we’ve got some not-at-all-CGIed footage of him running through snow with a big “M” floating on or near his helmet to prove it.

SYNOPSIS: This is just an hour of random footage of people doing charitable work, cute animals, and rainbows with Woody Hayes’ face superimposed on top. Also, his niece gave us a home movie where he’s standing in front of a church after a wedding shaking hands with a priest, so we threw that in there too.

SYNOPSIS: Hey, remember that time Mothra and Godzilla had a fight on top of the Big House during a Michigan vs. Ohio State game? The Big Ten Network does. It was awesome!