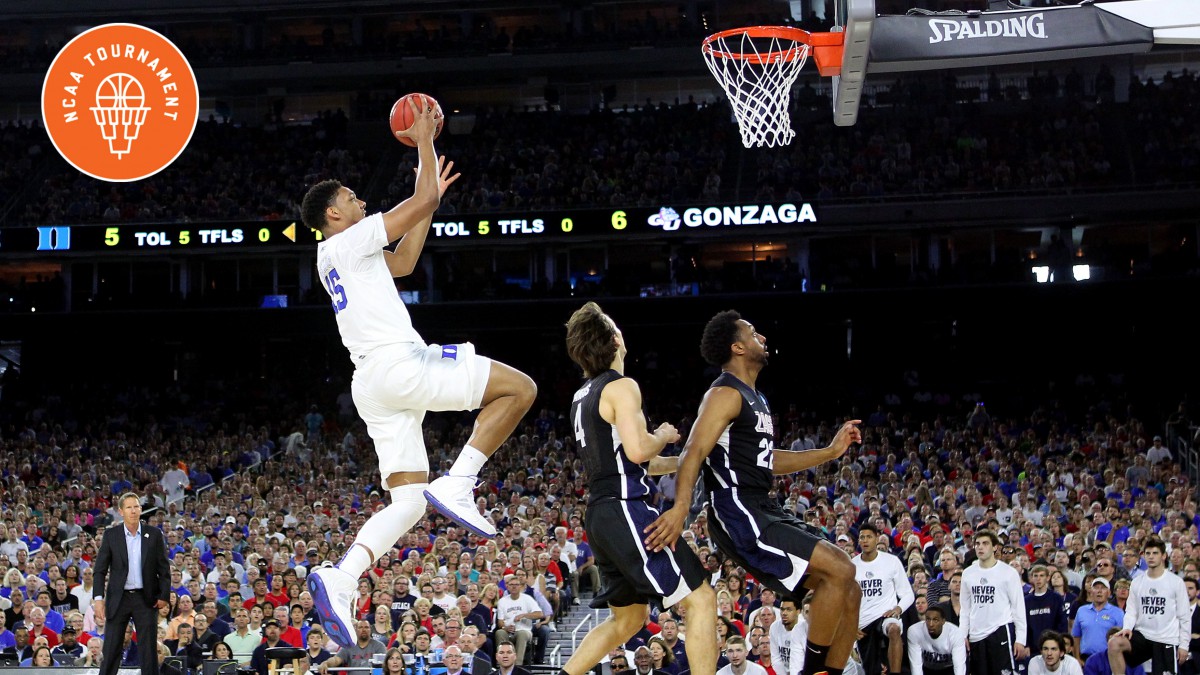 You want to like them. You know you do. If you’ve watched 20 minutes of March Madness this year, you know that Duke is too fun, too weird, too explosive, and too — I’m searching for a word that captures the feeling of Justise Winslow caroming into the paint; my thesaurus doesn’t have a synonym for “adjvjslacjskclklkxlc” — not to like. At least a little. At least as a guilty pleasure. It’s the Final Four, and if you’re here for the basketball, you can’t lie to yourself. Duke is brisk as hell.

“Whoa,” you’re thinking. “Whoa. Whoa. Aren’t you forgetting that hating Duke is a national moral imperative because [thought-collage made up of floor-slapping point guards, Coach K’s flag pin, woad-dyed Cameron Crazies pogoing like a berserker chamber of commerce, and the feral, on-brand howl of Dickie V]?”

I don’t know what I was thinking.

Oh right, I was thinking, “adjvjslacjskclklkxlc.”

But let’s put some pressure on that “adjvjslacjskclklkxlc”; let’s break it down a little. Because there are good reasons to hate Duke, aren’t there? You probably have your own favorites. After all, this is a basketball program so reviled that 30 for 30 made a whole movie about the hostility aroused by one of its star players 23 years after he last played college basketball. Not even Kentucky gets that kind of treatment. Not even when John Calipari flips open a briefcase and starts hawking genuine diamond cell-phone cases during halftime interviews.

So if we’re going to throw out all the reasons not to like Duke solely because Jahlil Okafor’s footwork makes us shout out a Gmail password — well, we want to be sure where we stand. People hate Duke basketball for one or more of the following reasons:

(Here’s Winslow flying in for a block against Notre Dame.)

3. The media uncritically reinforces this pose of moral superiority because of both general servility and Mike Krzyzewski’s long reach within the corporate golf patriarchy.

4. This leads to fatuous public celebrations of a style of basketball that has often been defined by tedious charge-taking and clumsy hustle, rather than athleticism or talent.

(Here’s Winslow celebrating a 3 so hard that he forgets to get back on defense.)

5. Referees and the NCAA protect that style of play because of Duke’s reputation, meaning Duke gets calls against more deserving teams; this is also bullshit.

6. Coach K is obviously an advance scout for a species of lycanthropic ferret-people coming to take over the Earth, yet no one talks about this.

In other words: Duke acts like it’s better than everyone else, and we’re supposed to swallow that even though it’s not true. You can argue with, or at least roll your eyes at, any of the points on this list.1 But there’s no denying the molten resentment fans feel at being told to admire the Duke Way when the Duke Way so often comes across as entitlement pretending to be virtue.

All the Grantland coverage of the 2015 NCAA tournament, right here.
So hate Duke; I’m not here to stop you. If you think the way to be free from media manipulation is to do the exact opposite of whatever the media says, or if you think the way to escape bullshit sports morality is to turn your own sports preferences into moral stances, then knock yourself out. Wisconsin is a very fun basketball team and Kentucky is the scythe of Jehovah and Michigan State is a delightful overachiever that scores the ball better than you’d think. You’ll have no shortage of teams to root for. Me, though? I am a bad person, and I am going with “adjvjslacjskclklkxlc” wherever I find it.

The thing about “adjvjslacjskclklkxlc” is that it’s indifferent to context. It’s looking at the painting, not the museum. It’s jumping out of your seat because Quinn Cook made his defender goddamn fall down, not scowling because Steve Wojciechowski existed 20 years ago. It’s going to sports for the line-in adrenaline surge, for the rush that comes from watching something impromptu and beautiful, for the basic sympathetic link to bodies in flight that draws you to these games in the first place.

I don’t know; maybe players are just the avatars of institutions and ideas, and sports can be enjoyed only through a carefully maintained ethical framework designed to minimize your susceptibility to Capital One commercials and the word “leadership.”2 But then why are you watching at all? If sports add anything worthwhile to the world, isn’t it that they marginally increase the chance, day to day, that a person will gasp for joy? And doesn’t a gasp like that come before everything else — before uniforms, coaches, money, commercials, TV commentators, fan bases, moral instruction or the lack of it?

Maybe it’s the particular collection of talents in Durham this year. Maybe it’s the way Krzyzewski has spent the last four seasons refashioning Cameron Indoor into a Calipari-esque trampoline of one-and-done NBA prospects. Whatever it is, this year’s Duke team can make you gasp for joy. Watching Jones and Cook swing around the perimeter, watching Okafor (who hasn’t even had a great tournament) reorganize defenses like a wasp that just landed on an anthill, watching Winslow drain pull-up 3s that seem to have his whole body in them — any other jersey and they’d make you grin like a happy fool. You could fight this because you sort of remember not liking Greg Paulus. Or you can just get out of your own way and enjoy it.

I like teams that are imbalanced but work anyway. I like watching talented young players exploring their own limits. I like watching offenses that have to hit an insane pitch of intensity before they can work at all. Duke just made the Final Four with eight scholarship players,3 four of whom are freshmen. Two of those freshmen are potential no. 1 draft picks.4 Duke lacks the overwhelming toughness of Michigan State, the overwhelming exuberance of Wisconsin, and the overwhelming … overwhelmingness of Kentucky. Duke is the Millennium Falcon of Final Four teams. It doesn’t have enough parts, and it’s prone to breaking down in asteroid fields (getting blown out at home by Miami). But when the hyperdrive comes online and the stars stretch out … man, it’s something to see.

I like this. I like that this team is its own thing. I like that it’s thrilling, and I like that it doesn’t make a ton of sense. I have no idea how to put what’s great about it in line with the annoying/disturbing parts of the program’s history and the NCAA in general, but that’s not Duke; that’s sports in 2015. You can try to fit your allegiances into a neat package, or you can embrace “adjvjslacjskclklkxlc.” But the thing about “adjvjslacjskclklkxlc” is that you can’t resist it, not when it hits you.

In other words, hate Duke if you want. But watch this team; I bet you like them too.