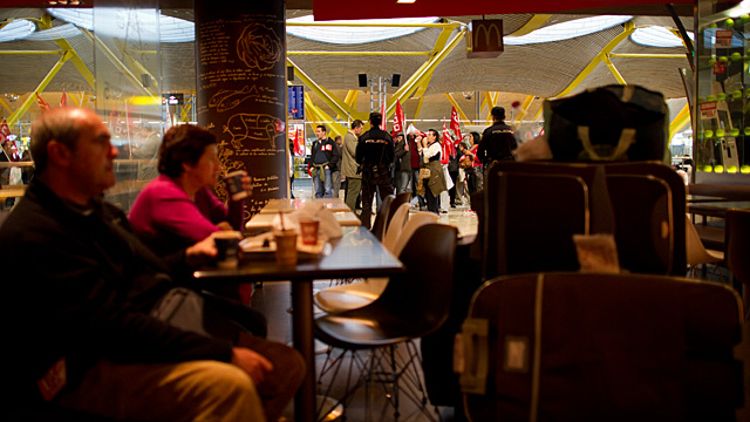 New restaurants have a staggering failure rate, largely because the infinite number of aspiring proprietors ignore the eternal truth, “Nature abhors a vacuum.” This explains the inevitable shuttering of your friend’s food truck that specialized in artisanal Fruit by the Foot or that gastropub down the block that tried to target-market college kids by serving a dozen varieties of Bagel Bites and harboring the last known supply of “classic” Four Loko without a liquor license. And yet, in the face of these harsh financial realities, the Atlantic Coast Conference is betting that nature has a hole in its belly that can only be filled by a $20 basket of chicken fingers named after Steve Wojciechowski.

Assuming most interested parties were distracted by the rumors of Selena Gomez cheating on Justin Bieber with Gucci Mane, the Raleigh-Durham International Airport website snuck in a mention of the “ACC American Cafe” that will be be operational by Spring 2014; one imagines its grand opening will be right on cue to attract the numerous Duke and Virginia grads on layovers en route to their horrifying iBanking jobs in New York, desperately guzzling multiple 11 a.m. martinis while watching their lacrosse bros stick it to those Johns Hopkins bozos. One also wonders why they had to go there with “American” and ignore the massive contributions of Serge Zwikker, Ademola Okulaja and Makhtar N’Diaye.

The mind truly boggles at the potential for the “ACC American Cafe,” particularly as it must find a way to compete with the California Pizza Kitchen and the Bruegger’s Bagels, which are truly awesome. Is it going to be a Cracker Barrel that sells DVDs of the first three Continental Tire Bowls in its waiting area? A Johnny Rockets for people whose nostalgia is primarily based on warm memories of Chris Corchiani or Jeff Lamp? Or, when you consider the ACC getting served a vaguely upper-crust rendering of the Big East’s horsemeat football over the past decade, is it just going to be sort of like a Chipotle?

Whether proof of purchase of an ACC Football Championship game ticket entitles you to free refills as long as you live remains to be seen. But in the meantime, John Swofford always seems to be one step ahead, and he’s already been testing the waters with an incognito ACC American Cafe operating in Jacksonville, Fla., and a password-protected Yelp page. Of course, we cracked the code on the third try (it’s Swofford’s dog, “Aresco”) and found some issues that the RDU franchise will have to fix if it hopes not to go the way of previous athletic conference/eatery hybrids such as WACDonald’s and the Metro Conference Rib Shack.

WahooSerious, Charlottesville, Va.: ★★ What happened to this place? Before they let in all the riffraff and yahoos, it used to be a suit-and-tie establishment, somewhere where you’d get treated with respect, no matter how drunk your date is.

BlueDeviledEgg, Durham, N.C.: ★★★★ The waiters are idiots, and they should be honored to serve this kind of clientele. But I’ve found if you stay in their ears and berate their every mistake, they’ll learn to give you whatever you want. It’s just like eating at home.

PillsburyGrohBoy, Undisclosed: ★ That was by far the most unprofessional, divisive, and negative patty melt I’ve ever eaten.

KarlHess&P, Raleigh, N.C.: ★★★★ I’m just a waiter, so I can’t truly speak for everyone else, but whenever you come to the ACC American Cafe, it’s not just a meal — I do my best to put on a show. I know the customers love it! They always make sure they get my name and say they’re gonna tell my bosses about me. They must really think I’m something!

MunchdownJesus, South Bend, Ind.: ★★★ Always with the “We’re so lucky to have you,” “This one’s on the house,” “If you want any of these guys thrown out of here to make you feel more comfortable, just say the word.” As it should be.

HungryLikeTheWolfpack, Raleigh, N.C.: ★★ I don’t know why we keep being treated like second-class citizens here; we’ve earned our place at the table as much as everyone else. Does this red blazer mean nothing to you? This is class.

UConnGold, Storrs, Conn.: ★ This is some bullshit, I’ve been trying to get reservations here for the last five years, and they always say they’re full.

EggsOverBC, Chestnut Hill, Mass.: ★★ Don’t bother. When you’re from around here, it’s like they pretend you’re invisible once you get in.

NevinTheDude, United States Penitentiary, Atlanta: ★★★ Man, they treat you real nice when you first sit down and they start accusing you of all kinds of crap — “Sir, we know those bottles of Patron were here before you arrived,” “For the last time, I appreciate what your lady friends do for a living, but no shoes, no shirt, no service.” “Mr. Shapiro, your Discover card’s been declined.”

TerpTartare, College Park, Md.: ★ I really wish I would’ve known how expensive this place is. Sure we got a little carried away with the appetizers and, I’ll admit, we did try to sneak out without paying. But I think making us wash $50 million worth of dishes is overdoing it.

The Cardinals Like Matt Barkley, Manti Te'o Speaks, and the Rest of the News from the NFL Combine

You're on Notice: The Players to Watch Post-Trade Deadline