Aaron Rodgers, the Packers, and the Crazy NFC North 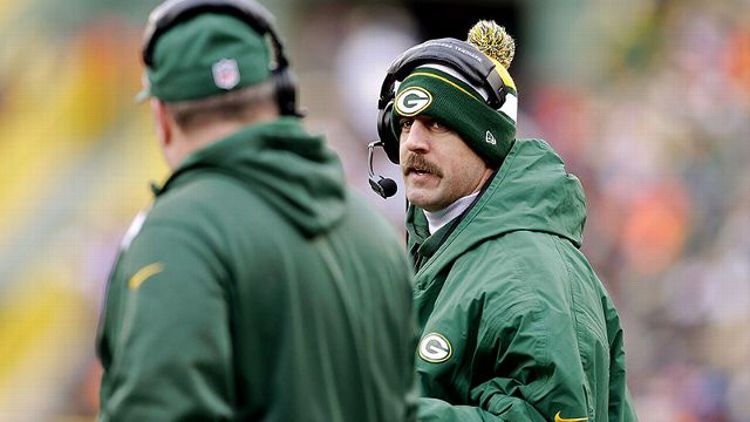 On the craziest day of the NFL season — as the Chargers hung 41 on the Chiefs, Tom Brady put together another classic, and the Cardinals stepped right into the playoff race — the NFC North still did its best to remain the most insane situation in football. In a span of about four hours, somehow, three different teams managed to gain control of their playoff futures only to lose them again.

Any referendum on the weirdness probably has to start with what happened at Lambeau yesterday afternoon. With the Packers trailing a Vikings team 23-7 at home, it looked like everything we thought about Green Bay a month ago was true. Losing Aaron Rodgers was maybe the most significant blow any team could suffer. Before Rodgers went down, the Packers were a 5-2 team whose only two losses came to San Francisco and Cincinnati on the road. Losing Rodgers meant a fall from clear division front-runner to a team that puts up 13 points against the Giants. With Scott Tolzien completely unable to get anything started for the Packers yesterday, Rodgers’s MVP case was somehow stronger than it could ever be while he was actually playing. As Detroit started its comeback against the Bucs, it looked like one more Packers stumble would be enough to end their chances in the division. Then Matt Flynn scored 16 straight points, Matthew Stafford threw the ball to the other team a bunch, and somehow Green Bay is a half game closer in the division than it was before yesterday began.

The Lions have a habit of losing in the most maddening ways possible, but this was special even by their standards. Stafford had thrown eight interceptions all season coming in before tossing four yesterday, and the final one to seal the game didn’t seem real until about the 20th replay.

There’s something cruel about turning the ball over in the red zone while down only three points in the final seconds, but it’s even crueler when the person turning it over is your superstar, who happens to be in the middle of an all-time great run. Those are the Lions, though. They know how to get creative with these things.

At 6-5, Detroit still sits atop the NFC North, thanks to the Lions owning the tiebreaker over Chicago, who wasn’t far off in the baffling loss department yesterday. The Bears’ defense is decimated — with defensive tackle Stephen Paea out, Chicago was down five of its Week 1 defensive starters, along with a few key backups — but giving up 42 points to Kellen Clemens and Benny Cunningham is a new low. Cunningham, the Rams’ 17th-string halfback, had 109 yards on 13 carries. Before a concussion cost him the second half, Zac Stacy wasn’t doing much worse, averaging 7.3 yards per carry on his 12 rushes.

The Bears’ offense has managed to stay afloat without Jay Cutler, but even if Cutler does come back in the next couple weeks, their ability to score points probably won’t be enough to offset how many they’re giving up. Since the Bears’ bye week, opposing starting running backs (including Cunningham) have carried the ball 86 times for 582 yards. That’s 6.76 yards per carry. That doesn’t even seem possible, especially when you consider Ray Rice and the Ravens running game was involved during that stretch.

The Bears and Lions’s flaws (Mike Glennon had a passer rating of 138.4 against the Lions yesterday) are so glaring that the conversation about the NFC North — as it typically does — looks to be swinging all the way back toward Green Bay. No official timetable has been announced for Rodgers’s return yet, but the reports are that he’s able to run and throw without any pain. The concern is about reinjuring that broken collarbone, and he’s made it clear that he doesn’t want to come back before that risk passes. But I’m guessing what happened yesterday might be enough to speed that process along.

The Packers visit Detroit on Thanksgiving Day, and thanks to Matt Flynn’s late-game heroics, that game may now be for first place in the NFC North. Asking Rodgers to come back on a short week is a pretty daunting request, but if he can play, and if the Packers win, there is a very real chance they could run the table down the stretch. Green Bay follows the game against the Lions with Atlanta, Dallas, Pittsburgh, and Chicago.

Green Bay isn’t without its flaws either. The Packers’ defense seems eternally banged up at this point, and even when Rodgers comes back, he can’t do much to stop teams from moving the ball. But those defensive struggles were around at the beginning of the year, too, when Rodgers and the offense were enough. It seemed out of the question early yesterday afternoon, but that tie, the Bears’ and Lions’ losses, and the looming specter of Rodgers’s return now makes the Packers the scariest team in the NFC North.