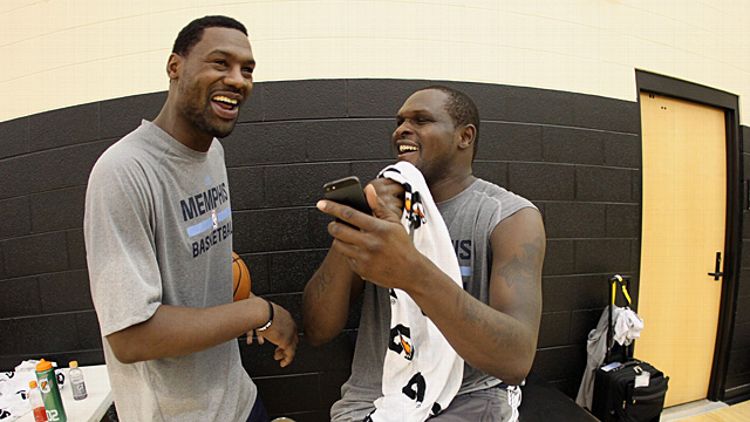 The trip to Memphis initially had nothing to do with basketball.

This past weekend was the Indie Memphis Film Festival, and through a series of chance encounters this summer, I was somehow slated to talk in front of a small crowd about a 22-minute film in which Michael Jordan played basketball against Martin and Charlie Sheen in 1986.

The day before, however, there was a basketball game. The Memphis Grizzlies’ home opener against the Detroit Pistons. So the city was doubly abuzz.

Even as a non-Grizzlies fan, there was a lot to be excited about with this game. For one, the triumphant return of Mike Miller, a Grizzlies player from 2003 to 2008 and Memphis homeowner throughout his NBA travels from Minnesota to Washington, D.C., to Miami. Then there was the prospect of seeing Zach Randolph and Tony Allen in real life. They have both become cult heroes in Memphis (especially Allen). Finally, as a masochistic Hawks fan, this would be my first opportunity to see Josh Smith in a Detroit Pistons uniform.

How would I feel about this? Would I wish Smith the best, hoping he matures in this next stage of his career? Or would I cackle as his dreams of being Dell Curry haunted yet another city?

After I finished a free handout BBQ sandwich, I walked into the arena and met my guide for the weekend, Jason Wexler, a board member for the Indie Memphis Film Festival, the COO of the Grizzlies, and the now-owner of my Jordan-Sheens VHS tape.

Wexler, dressed in the garb of an esteemed Memphis gentleman at a basketball game (slacks, no tie, dark blazer), seemed to know everyone in the arena. His exchanges were lighthearted and positively spirited, but there was also a noticeable sense of new anxiety; this was a franchise and a fan base learning how to cope with title-contention expectations.

The anxiety was only amplified by the fact that Memphis lost its first game of the season. Going 0-2 was not what the team, or the fans, needed.

One of the people who walked by to chat was former Tennessee Congressman Harold Ford Jr. After spending minutes watching Wexler work the arena like someone with political chops, I realized it paled in comparison to an actual politician, especially Ford, a man who was born into the role, and has a well-documented, Clintonian knack at remembering everyone’s name.

I shook his hand, laughing on the inside that we were both wearing dad hats (forward-facing baseball caps with a strong bill bend), and then he eventually sauntered off to shake more hands and then take his courtside seat among the TV and replay staff.

Courtside was a “who’s who” of Memphis elite. You had your people from the major companies headquartered in town (FedEx, AutoZone), local celebrities, and a collection of other well-to-do Memphians. A few other politicians, past and present, did laps around FedExForum. And under one of the baskets sat the brother of Ashley Manning, Peyton’s wife and part-owner of the team.

I could have happily people-watched for hours; it felt different than other arenas. Because the folks who had an investment in being seen also seemed eager to finally watch their team play basketball.

Then I remembered the other sliver of information I’d been told in passing. Future was coming out for the Grizzlies introductions.

I remembered because I looked up and there was Future.

The Atlanta-bred Nayvadius, wearing a Grizzlies jersey and jacket, was set to kick off the Memphis home basketball season. My heart was asking why, but the real question was how? How did this happen? And additionally, whose idea was this? I turned to ask Wexler, expecting a long, convoluted, complicated answer. His response:

And so it was. Sure, the team had to do things with regard to accommodations and flying him in on a jet from Drake’s tour, but ultimately it was a Zach Randolph text that was responsible for Future standing on the court preparing to perform. But before that, he had to see his boy.

Yes, that’s Randolph dancing and Future laughing, because that’s what friends do. Dance and laugh. This was followed by Z-Bo welcoming the rest of Future’s crew, behaving in an amazingly relaxed way as if they’d just walked into his parentless house party. And just like that, I couldn’t stop thinking about FedExForum being a Z-Bo house party.

This was too good.

And again, the game hadn’t even started.

I leaned over to Wexler and told him that somehow I was becoming a Grizzlies fan, though not as a replacement for my Hawks. There was so much to like about this team. He responded with, “I’m OK with being everyone else’s second-favorite team.” I liked that, and as soon as the game finally began, I decided I’d go all in for the Grizz as a fan for four quarters, which was shockingly easy to do when a team has a player like Tony Allen.

I’ve never seen a professional basketball player do the things Allen does during a basketball game.

There’s the scrappy play and clear talent that has kept him in the league for almost a decade, but it’s so much deeper than that. He’s an entertainer, but it’s not clear whether he knows it or not. There’s a little Metta World Peace in him — an almost childish curiosity that makes him want to sit on the scorer’s table during timeouts to look at a replay — but he lacks all negative traces of MWP/Artest.

There was the time Allen accidentally poked the Pistons’ Rodney Stuckey in the eye and loudly verbalized that he didn’t do it. But then he looked at Stuckey, obviously in pain, and said, “Aww man, my bad.” And then he put his hands atop his head and seemed to strongly internalize the fact that he hurt someone. He walked back to his bench, pouting. All of this took place in about 15 seconds, but watching it felt like a movie.

There was the way he interacted with Randolph, which was the closest thing I’ve seen in basketball to what Ray Lewis and Ed Reed had on a football field. Z-Bo would get upset at himself and go sit at the end of the bench, and Allen would go down and plop next to him for a minute. And in that moment, it was Zach and Tony versus the world. No one else seemed to matter. And then they’d be good, break, and would both join the rest of the Memphis Grizzlies franchise.

It was impossible not to watch Allen, almost to a point of studying him, because his passion for the game, his teammates, and the people who paid to see him was unparalleled. It was no wonder why everyone in Memphis loved him, because as a fan you dream of having a player like that.

As the game got near the end, with Memphis down with less than two minutes remaining, I was in full Grizzlies fanboy mode. I’d swapped out my hat for a team cap and was standing up whenever it was mildly appropriate, trying to help will this team to win. Yes, a win would be good for the franchise, but Memphis is also one of those cities where a win or a loss on a Friday evening could dictate how much fun the city is that night. That’s not the case where I come from, so if it meant losing my voice for my second-favorite team, I was prepared to do so.

At the end, everything I wanted to happen came true. My intense love of free basketball presented itself, with overtime, and then that was followed by a Memphis victory. I saw Rasheed Wallace be a Pistons assistant coach in a brown suit, occasionally moving his mouth to say things to players. I saw Harold Ford go from an ex-Congressman to the city’s version of Spike Lee, standing up and passionately yelling at referees. I saw Tony Allen run down the court multiple times with his biceps flexed, much to the delight of everyone with eyes. I saw a crowd fully rise to its feet whenever Mike Miller caught the ball beyond the 3-point line, and I felt that same crowd explode when he made them.

And most importantly, I saw Josh Smith take 23 shots in a loss.

Eleven of which were 3-pointers.

And of those, eight of which he missed.

I couldn’t have written the script better if I tried.