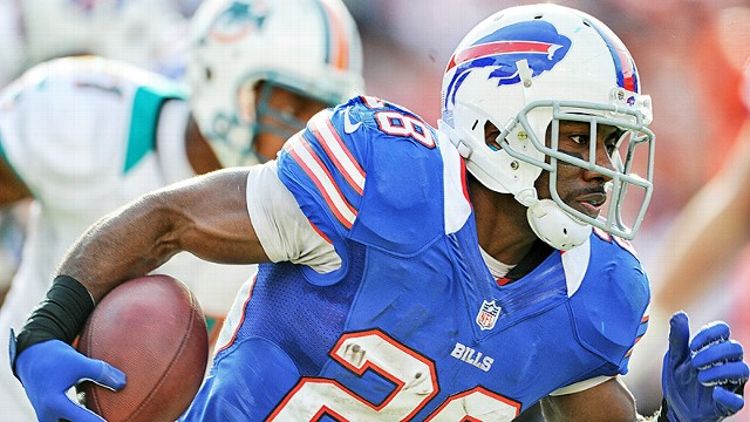 I would say that the Chan Gailey era was a dark time for Buffalo, but really, after Gregg Williams, Mike Mularkey, and Dick Jauron, I guess darkness is relative. Doug Marrone, former Syracuse head coach and, more importantly, former Saints offensive coordinator, is the latest attempt at a worthy carrier of Marv Levy’s torch, and so far, Bills fans at least have to be pleased that the sins of the previous regime are slowly being purged.

In March, the Bills released quarterback Ryan Fitzpatrick, he of the six-year, $59 million contract signed less than two years earlier. With their first pick in April’s draft, Buffalo drafted the man they hope to be their answer at that position — Florida State’s E.J. Manuel. And about a month ago, 40-year-old Doug Whaley replaced Buddy Nix — the man responsible for Fitzpatrick’s payday — as the team’s general manager.

But if Fitzpatrick is the most brutal crime committed by old management, C.J. Spiller is the black mark of the old coaching staff. Spiller, taken ninth overall in the 2010 draft out of Clemson, was used as a situational player for his season and a half in Buffalo. A punt returner in both 2010 and 2011, Spiller didn’t hit double-digit carries until a Week 10 injury to starting running back Fred Jackson gave Spiller the nod for the rest of the season. Spiller did well enough with the work — averaging 5.19 yards per carry over the final six games — to earn the 1a role in Buffalo’s two-man running game heading into last season. What followed was enough to drive Bills fans completely insane.


In Buffalo’s first game, Spiller totaled 169 yards on just 14 carries. In its second, it was 15 for 123. Overall, Spiller would have six games in which he averaged more than seven yards per carry, and for the season as a whole, he tore off exactly six yards a clip. None of this, however, was enough to keep Gailey from using Jackson to rob carries — usually in the red zone — from his best player. Because Spiller is very fast and doesn’t weigh 200 pounds, he, like Jamaal Charles before him, was apparently unfit for action anywhere near the goal line.

To understand what sort of weapon Gailey was taking off the field during his best opportunities to score points, let’s go to the numbers. We already know that Spiller led the league with six yards per carry, but don’t worry, there’s more. According to Football Outsiders, Spiller led all running backs, including Adrian Peterson, with a DVOA of 27.5 percent. His success rate of 55 percent (a measure based on the yards needed in any given down, distance, and score situation) was the best for any running back with 100 carries that didn’t play with Peyton Manning or Tom Brady. Despite having only 207 carries, according to Pro Football Focus, he was tied sixth in the league with 16 runs of 15 or more yards (everyone ahead of him had at least 285 carries), and he led the league by a wide, wide margin in the site’s Elusive Rating (a measure based on missed tackles and yards gained after contact per touch). No back in the league, per touch, was better.

Much to the glee of Bills fans, Marrone said last month that he has no concerns about using Spiller in every situation. “My philosophy’s always been if someone starts off and they’re running well, keep feeding them the ball,” Marrone said, according to the Buffalo News’s Tim Graham. The next day, Spiller told the NFL Network that he expects an expanded role in the Bills’ new offense, both as a back and a receiver (Marrone was the offensive coordinator during Reggie Bush’s first three seasons in New Orleans). The message seems to be this — we will be seeing a whole lot of C.J. Spiller.

Now, I’m tempted to let Bills fans have this one (they deserve it), and move forward assuming that Spiller’s crazy production from a year ago expanded to 400-some touches will lead to him and Buffalo lighting the league on fire. Unfortunately for everyone, that’s not how this works.

A good comparison is one that actually comes from a different sport. During his final season with the Oklahoma City Thunder, James Harden put up the best efficiency numbers of any perimeter player in the NBA (his .6596 True Shooting percentage was good for second in the league, four spots ahead of teammate Kevin Durant). With his move to Houston and into an expanded role, it was inevitable that an uptick in usage would lead to a decline in those numbers. As Harden’s usage rate increased from 21.6 percent to 29 percent, his True Shooting fell to about 60. More total opportunities tend to mean a smaller ratio of ones specifically suited for a player’s success.

That’s likely to be the case with Spiller, but as it was with Harden, the increased workload trumps the slightly diminished per-play effectiveness. Harden’s overall importance was more than it had ever been, and as a result, the Rockets won plenty more games. Spiller may not average six yards per carry again, but five yards per carry over a bunch more carries is even better. There’s a very good chance that a new offense and new role means this will be the Year of Spiller, and I know I’m not alone in saying it’s about time.

The MLB Weekend Top 10: Does Anyone Love the AL East?