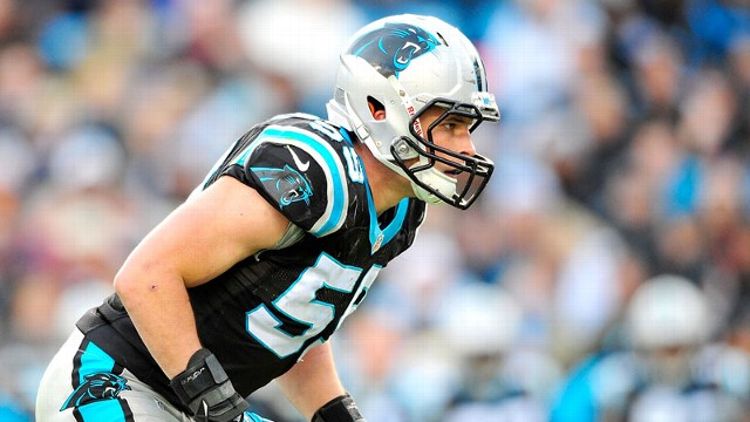 The first time I saw Luke Kuechly play was in September 2010. I was working in Boston at the time, and I’d been sent to cover Boston College’s season opener against Weber State. That was notable enough, but that day also marked the return of All-American linebacker Mark Herzlich, who’d missed the entire 2009 season as he was treated for Ewing’s sarcoma, a type of bone cancer. As he should’ve, Herzlich owned the moments before kickoff, including an unforgettable one as he led Boston College onto the field, but when the game actually began, it was another Eagles linebacker you couldn’t take your eyes off of.

Kuechly was everywhere, recording 11 total tackles in Boston College’s 38-20 win, and a year later, when Kuechly won the Butkus Award as the best collegiate linebacker in the nation, and Carolina selected him with the ninth overall pick in the 2012 draft, I wasn’t the least bit surprised.

Understanding how to track down ballcarriers is, for the most part, a transferable skill from one level to the next, and in his first season in the NFL, Kuechly was the same type of tackling machine he’d been in college. He led the league with 164 tackles as a rookie on his way to Defensive Rookie of the Year honors. This season, there’s no reason to think that Kuechly won’t be even better. Carolina is hoping that former Pro Bowl linebacker Jon Beason will be back to health as he moves to the outside to accommodate Kuechly, and first-round pick Star Lotulelei is exactly the sort of space-eating, double-team-commanding defensive tackle that will make Kuechly’s role as an uninhibited missile even smoother. With Charles Johnson and Greg Hardy quietly performing as two of the more underrated pass rushers in the league, Carolina is slowly building a very good front seven, of which Kuechly will be the focal point. As most young defenders are, Kuechly was much better against the run than he was in coverage a year ago, relying more on instinct than on nuance. The latter is something that will likely come.

Linebacker is one of the positions where those instincts are most easily recognizable. The good ones are always around the ball, where the camera is constantly fixed, and players like Luke Kuechly are bound to be a constant fixture of any telecast of which they are a part. More than linemen or defensive backs, appreciating them isn’t as dependent on the subtleties of what they do. Their impact is felt at the very point at which we focus our attention, and that means for football fans, Luke Kuechly is a face we’ll be seeing a lot of for a very long time.

A Prospect’s a Prospect, No Matter How Small: Vanderbilt's Baby Recruiting