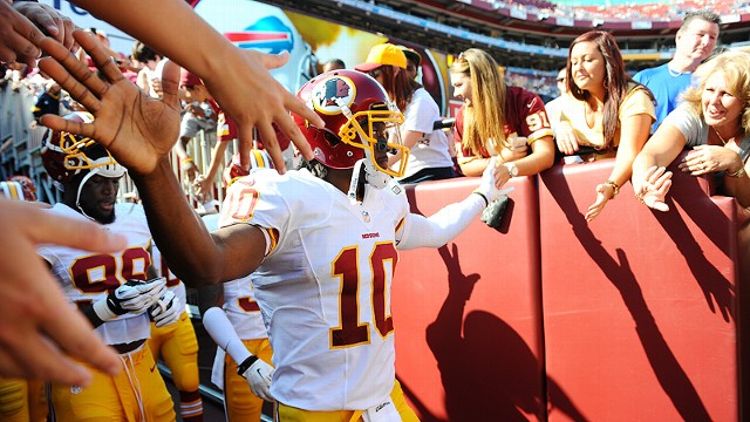 What’s that? You were wondering exactly how many days until the start of the NFL season? Well, you’re in luck! We here at the Triangle are providing a daily reason to get excited about pro football’s return.

I said I wouldn’t do this. As someone who knows all about the uncertainty that comes with rooting for stars returning from major knee injuries, I didn’t want to be among those jinxing Robert Griffin’s season before it even began. Then two things happened.

First, I realized that 114 days is a lot of days, and now that we’re a week away, the topics have become pretty scarce. The second is that as of yesterday, RG3 has reportedly been cleared to play in Week 1. Sooo … sorry, Redskins fans.

For the past 20 years, us Bears fans have held a sort of kinship with the fans in Washington. Everyone who watched a Bears-Packers game between 2000 and 2008 saw the graphic listing Chicago’s starting quarterbacks since Brett Favre’s first start, and if there was a fan base that could sympathize, it was Washington’s. Even down to the Shane Matthewsness.

The day the Bears traded for Jay Cutler, I had such a fun night that I nearly missed my flight to Detroit for the Final Four the next morning. And that was Jay Cutler. It leaves me in no position to judge the adulation, the wedding gifts, and, also, the horror among fans when it comes to RG3. Washington mortgaged its future because it felt Griffin was its future, and as it turns out, it was right.

What happened in Griffin’s final game last season has gone a long way in blurring just how good Griffin was in his rookie year. For most of last season, every bit of RG3 craziness was warranted. Along with Adrian Peterson, he was the most exciting player in football.

Pick a play from last year: the Week 1 touchdown to Pierre Garcon, (1:10 above), the touchdown run against Minnesota (3:18), the 60-yard bomb to Aldrick Robinson (1:47), which was inevitable the moment Griffin faked an end around to Brandon Banks.

The one I remember most wasn’t a touchdown. It was the play at 5:28 above, a 20-yard gain that saw Griffin roll to his left, sending Jason Pierre-Paul — one of the best athletes in any sport — crumbling to the ground in the open field, and finding an open receiver in the middle of the field.

In the end, Griffin may be the Redskins’ savior, but for the rest of us, he’s just going to be a whole lot of fun.