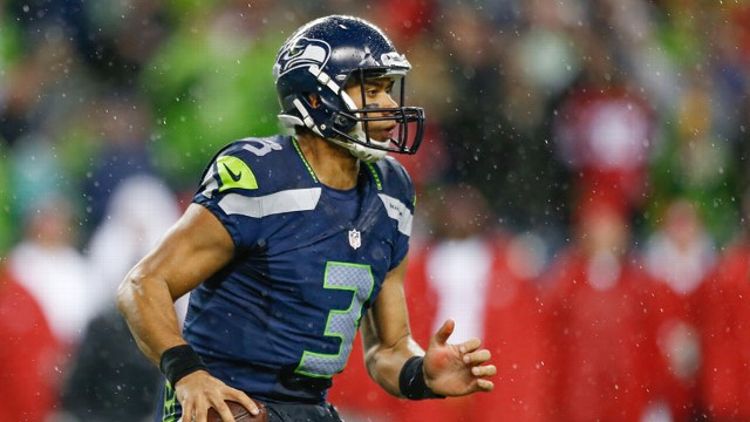 I consider my not knowing that this song (a mash-up of the xx’s “Intro” and “Touch the Sky” by Kanye West) existed as one of my greatest failures as a person. Related: “Intro” works for anything. Ever.

There is no better manifestation of Russell Wilson’s perfection as a life form. Never smeared, always immaculate — the eye black, and everything else.

Seattle threw the second-most play action passes in the league a year ago, according to Football Outsiders, and had the fifth-highest DVOA on those passes. The Seahawks’ punishing running game and the threat of Wilson as a runner mean the play-action game is likely to be a staple of Seattle’s offense for the foreseeable future. And with throws like this one to Sidney Rice, that’s bad news for everyone else.

I’m fairly certain the first of these two plays — a drive-extending first down with Seattle trailing in the fourth quarter — is the moment Brian Urlacher decided to retire. The second was a scamper for a first down with Seattle facing a third-and-4, in overtime, on the edge of field-goal range in one of the league’s most treacherous kicking stadiums. Russell Wilson tore my Bears-fan heart out that day, but it certainly made me a believer.

Russell Wilson was drafted in the third round, presumably because he’s small and lacks arm strength. This would be the time to mention he finished his rookie season with 3,118 yards and 26 touchdowns.

This is the most impressive play of the bunch, and it’s not close. An untouched blitzing Dolphin flies through the middle of the line, Wilson sees him, reverse pivots, rolls to his left, and, across his body and on the run, throws a deep out 40 yards downfield for a first down. Russell Wilson was drafted in the third round.

There are jokes to be made about the eye black, and the weight-lifting montage, and about the amount of 1 percent milk Russell Wilson probably drinks, but the truth is that his rookie season really was remarkable and Seattle should be ecstatic that he sits at the helm of their organization. Earlier this week, Wilson told John Clayton that last offseason, he’d arrive at the Seahawks facility at around 6 a.m. and leave about 13 hours later — every day. With most players — and people — a statement like that would make you want to hit them in the face; with Wilson, it somehow remains endearing. Wilson was a third-round pick, and though I can’t say how many people envisioned that scene of him jogging out of the tunnel as Seattle’s starting quarterback, I can tell you there was at least one person who did.