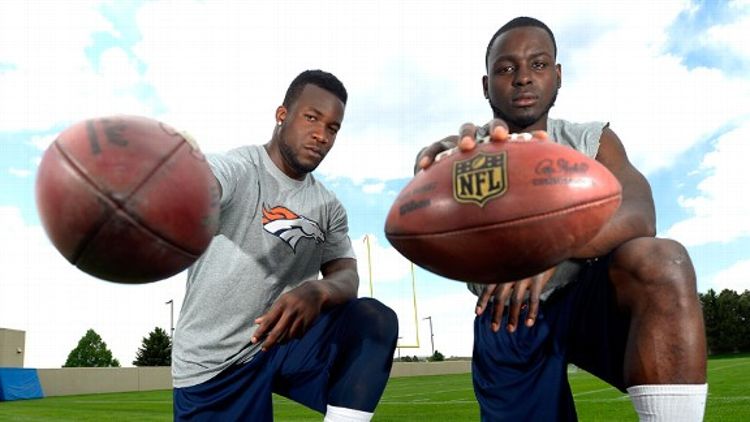 I know what you’re thinking. Most teams don’t even open training camp until this weekend, so choosing the winners of the league’s highest-profile position battles before these guys take a single snap is a fool’s errand. To that I say that you obviously aren’t aware of my never-ending quest to embarrass myself. For the next few days, we’ll be anointing starters around the league based on nothing but speculation and guesswork. Because here at the Triangle, we’re all about science.

Depending on how the Von Miller suspension works out, running back will be the biggest question for a Denver team that comes into this season as the favorite in the AFC. Ronnie Hillman has made his stance on the job opening clear, but I think we can safely say there’s a conflict of interest in play there.

The Broncos took Ball, who had a widely productive college career (that included a lot of carries) high enough in April’s draft that it’s reasonable to think they want him to be a significant part of their offensive plans at some point in his career. Ball rushed for at least 1,800 yards twice at Wisconsin, and he’s the sort of back that would be set up to succeed in a Peyton Manning offense. The Broncos are going to run when it’s advantageous, and Ball is more than capable of grabbing yards in five-yard chunks. Knowshon Moreno is essentially a lesser version of what Denver is hoping for with Ball, and we saw the type of productivity Moreno had when Manning was putting him in the right spots.

Hillman is the type of home run threat that Ball is not. He ran a 4.45 40-yard dash in the lead-up to last year’s draft, and his big-play potential is far greater than Ball’s. Hillman’s challenge will be maintaining some of the bulk he’s put on this offseason.

Winner: Ball. Hillman will start training camp working with the first team, but my guess is that at some point during the season, the Broncos see the look Ball gives them. In an offense run by Peyton Manning, a consistently reliable running game is the ideal running game, and that’s what Ball should provide.

Everyone vs. Everyone, 49ers, no. 2 wide receiver

Figuring out who would line up opposite Michael Crabtree was obviously a priority for San Francisco during the offseason, as their first move was a trade for Ravens playoff hero Anquan Boldin. Now, the question is who will line up opposite Boldin with Crabtree out for at least a portion of the season with an Achilles tear he suffered in May.

Mario Manningham is familiar with being a secondary receiver on a title contender, but he’s also returning from injury (a torn ACL). Kyle Williams is in the same situation. The more likely solutions, especially in the short term, are the two most recent San Francisco draft picks at wide receiver. A.J. Jenkins was taken in the first round a year ago but didn’t catch a pass as a rookie. It would seem that going into his second season, and with the Niners facing a host of injuries, Jenkins won’t have a better opportunity to emerge as the no. 2 option. In this year’s draft, San Francisco spent a fourth-round pick on Louisiana Tech wide receiver Quinton Patton, who at one point was considered a second-round talent.

Winner: Manningham. This obviously depends on his health, and by “winner,” I mean the player who lines up opposite Boldin when San Francisco comes out of the huddle in Week 1. Jenkins should get plenty of chances in his second year; he’s gotten a lot of praise from both the coaching staff and teammates about the improvements he’s made from Year 1 to 2, and at some point, San Francisco will want to know what they have.

It’s probably wrong to call this a training-camp battle, because both Broyles and Burleson are still working through injuries, but this is a situation to keep an eye on as we move closer to — and eventually into — the season. The Lions’ reliance on Calvin Johnson has become a real problem, and developing a complementary receiving option will go a long way in helping realize the potential of both Detroit’s offense and Matthew Stafford.

Part of the reason Broyles fell to the Lions in the second round of last year’s draft was the torn ACL he suffered in his final season at Oklahoma. This most recent tear was in the other knee, but obviously, it’s cause for concern. When healthy, Broyles had an almost peerless career as a Sooner. No player in Division I history has caught more passes, and although he lacks some of the elite physical traits typical of highly drafted receivers, few have a better feel for the position.

Burleson is coming off his own season-ending injury, and although he’ll likely be the starter opposite Calvin Johnson, he’s an aging receiver with a defined ceiling. If Broyles is healthy, it won’t be surprising to see him turn into a fixture alongside Johnson.

When the Rams drafted Pead in the second round a year ago, they did it hoping he would be the successor to Steven Jackson. As a rookie, Pead was pretty much a disaster. He fell behind in learning the playbook after missing offseason activities because of Cincinnati’s late graduation, and he never really caught up. Again though, a second-round pick for a running back is an indication that the player in question is viewed as starting material, and there’s a good chance that’s how things play out in St. Louis.

The Colts did a lot of big — and questionable — spending this offseason (hello, Erik Walden), but their late-in-the-game addition of Ahmad Bradshaw may have been their best of free agency. It feels like Bradshaw has been in the league for a decade, but he’s just 27, and when healthy, he’s among the best backs in a league on a per-carry basis. Bradshaw was fifth in DVOA last season, according to Football Outsiders. The problem for Bradshaw, of course, is staying on the field. He’s played 16 games just once in his career, and he’s spent large portions of the games he has played dealing with various ailments.

Bradshaw will start camp (which begins Sunday for Indianapolis) on the PUP list, so Vick Ballard will get the early look as the starter. When both are healthy, though, there’s no denying that Bradshaw adds a different element to the Indianapolis offense.

Happy 50th Birthday, Karl Malone! Here Are Some GIFs of You!