Two downtrodden franchises from two huge markets. Two long-suffering fan bases suddenly driven to spasms of ecstasy. This is all we need to say: Either the Chicago Cubs or New York Mets are going to the World Series! The battle to make it there could be an all-timer.

It was probably nothing. Jake Arrieta’s NLDS Game 3 performance — an allowance of four runs on five hits, two walks, and a homer over 5.2 innings — was probably a random aberration striking the pitcher who just completed the best second half in baseball history. Those four earned runs were twice as many as he’d allowed in his previous 10 starts combined. A 6-foot-4, 225-pound plow horse with three wipeout pitches, Arrieta is probably immune to October fatigue, and he’s probably going to be a formidable opponent for the Mets.

That said, here is your (slight) reason for concern: Arrieta’s career high for innings pitched before this season was 156.2 in 2014. Counting his two playoff starts, he’s now at 243.2 for 2015. While it’s not likely that Arrieta suddenly hit a wall after the wild-card game, he’s still pushing his single-season odometer much higher than it’s ever been.

For Arrieta’s wingman, New York’s win over Los Angeles was good news. For the second straight series, Jon Lester, the Game 1 starter, gets the good fortune of facing a team that very rarely steals bases. The Mets ranked 29th in the majors with just 51 swipes this year — a big advantage for a pitcher who’s simultaneously one of the toughest lefties in the league and incapable of holding runners at first.

As for the other Cubs starters, Kyle Hendricks and Jason Hammel, expect Joe Maddon to treat both as glorified long relievers. The pair combined to throw just 7.2 innings in Games 2 and 4 of the NLDS. After Game 4, Maddon said he would’ve pinch-hit for Hammel in the bottom of the second had one more batter reached base — a clear sign that he’ll lean heavily on his bullpen at the first sign of trouble for either of his lesser two rotation options.

On the other side, in Game 1 the Mets will go with the pitcher they tabbed as their no. 3 starter for the NLDS. Of course, Matt Harvey also happens to be the best no. 3 starter in the majors. He’s shaken off workload concerns and Scott Boras’s edicts to shine down the stretch and take his place in the playoff rotation.

Like Arrieta, the prospect of a theoretical slowdown hangs over the Mets’ baby-faced rotation, but it’s hard to tell if any actual fatigue set in against the Dodgers. Harvey and Steven Matz lasted just five innings apiece in their starts. Whether Terry Collins pulled them due to exhaustion, so-so performance, a big lead already in hand (in Harvey’s case), or a desire to generate offense with a pinch hitter (in Matz’s case), additional short starts risk exposing a bullpen that, outside of Jeurys Familia, isn’t nearly as strong as Chicago’s middle-relief and setup crew. Getting six-plus innings from everyone could be the key to a Mets series victory.

Meanwhile, Jacob deGrom and Noah Syndergaard looked strong in their three combined NLDS starts. Both were pumping fastballs into the high 90s, both flashed some big strikeout totals, and both now get to face the team that whiffed more than any other NL squad. The same starting-pitching handicap/advantage that existed for the Mets in the Dodgers series holds for the Cubs matchup: The best pitcher might hail from the other team, but there’s not a huge margin between Arrieta and deGrom, and the Mets have a deeper stable of quality starters to rely on beyond their nominal ace. 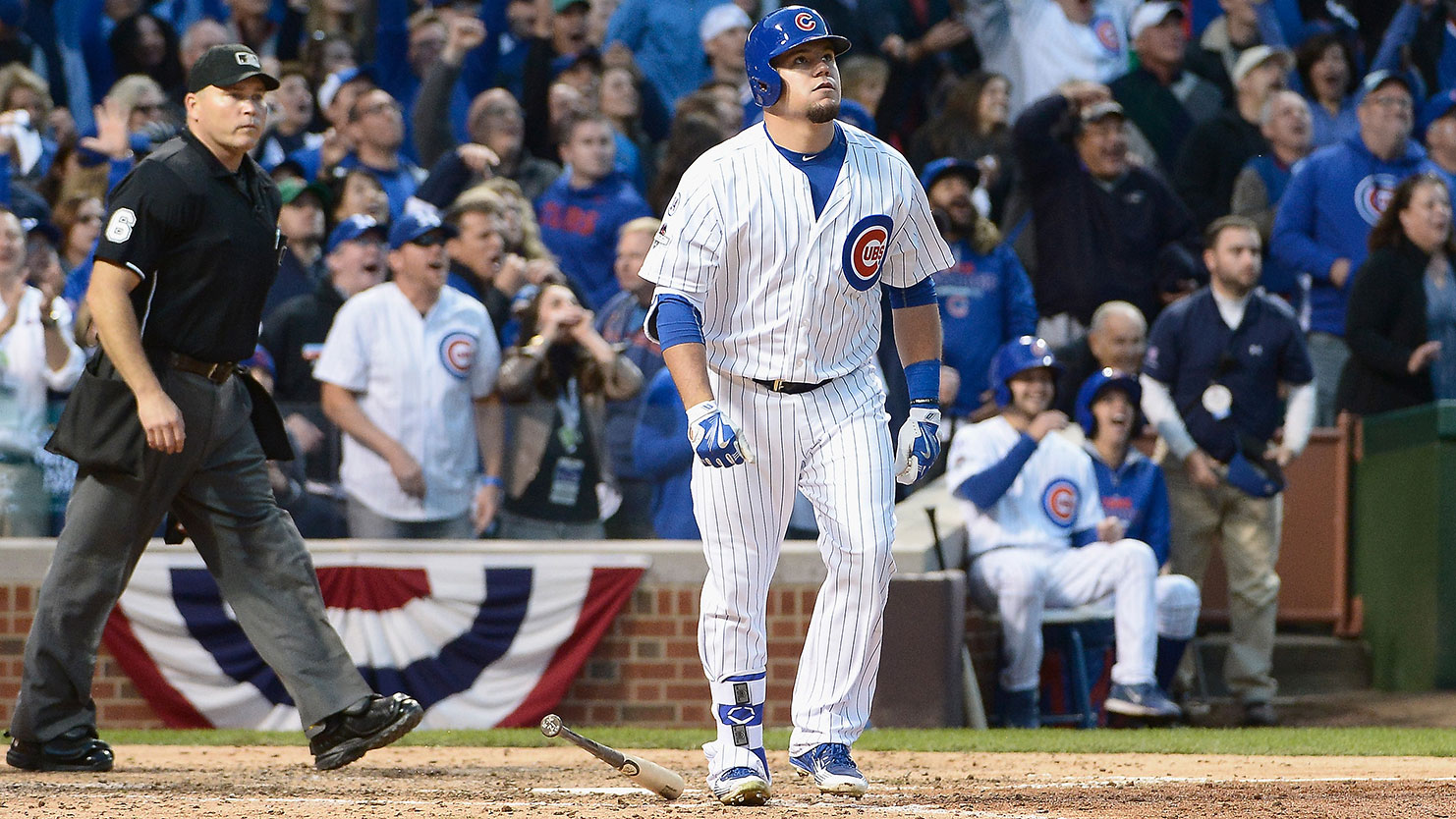 Coming into trade deadline week, the Mets offense was an abomination, averaging fewer than 3.5 runs per game and ranking dead last in the National League in runs scored. A wild and productive trade deadline week, a return to health for some key players, and a couple of other contributors catching fire in the second half turned everything around. From July 25 on, the Mets led the NL with more than 5.5 runs scored per game. They also led the NL in second-half home runs, a feat that would’ve seemed inconceivable after an anemic performance before the All-Star break.

Yoenis Cespedes got most of the plaudits and all of the inexplicable MVP candidate love, but he had plenty of help. Curtis Granderson batted a huge .278/.392/.506 in the second half, then tacked on a .389/.476/.500 line in the NLDS for good measure. Daniel Murphy almost single-handedly carried the offense in the deciding Game 5 and finished the series with an .810 slugging percentage, including a Game 1 homer off Clayton Kershaw that made one wiseass Canadian baseball writer look really dumb for suggesting a platoon.2 Although several other Mets struggled during the Dodgers series, we’ve seen enough from righty-crushing rookie Michael Conforto, dynamic young catcher Travis d’Arnaud, slugging first baseman Lucas Duda, and others to believe in the Mets’ offensive potential at this point.

If Juan Uribe were healthy, I would still suggest a platoon, given that Murphy’s a career .271/.303/.371 hitter vs. lefties, he hit worse than that this year against southpaws, and he plays below-average defense.

The second-most prolific power-hitting NL team of the second half was the Cubs. The combination of rookies Kris Bryant and Kyle Schwarber and likely top-five MVP finisher Anthony Rizzo represents one of the most potent offensive trios in baseball. Schwarber carried his freshman-year magic into the playoffs, and he already looks like one of the best pure power hitters in the game, especially against right-handed pitching. Like his fellow lefty hitter Murphy, Schwarber also found success against a tough southpaw last series, blasting a home run so high and so far off Cardinals reliever Kevin Siegrist that it’s now encased in plastic atop the right-field scoreboard. If the Cubs win two more series, it may well stay there forever.

Beyond those three, it doesn’t get much easier for opposing pitchers. In fact, there might not be an easy out anywhere in this lineup. Dexter Fowler is a pitch-taking machine who ranked among the league leaders in walks. Starlin Castro posted an OPS nearly 200 points higher in the second half than the first, batted .426/.452/.750 in September, and hit a bunch of balls hard last series. After coming off the bench to replace an injured Addison Russell, who has been ruled out for the NLCS with a hamstring strain, Javier Baez hit a crucial opposite-field, three-run homer in Game 4. Miguel Montero slumped against the Cardinals but remains an above-average offensive catcher (as well as an excellent pitch framer). As for Jorge Soler, all he did during the NLDS was reach base nine straight times and make the biggest throw of the series.

One other wrinkle: Watch out for the possibility that Maddon will mix up his lineup, too, given the different configurations he’s already deployed so far this postseason. 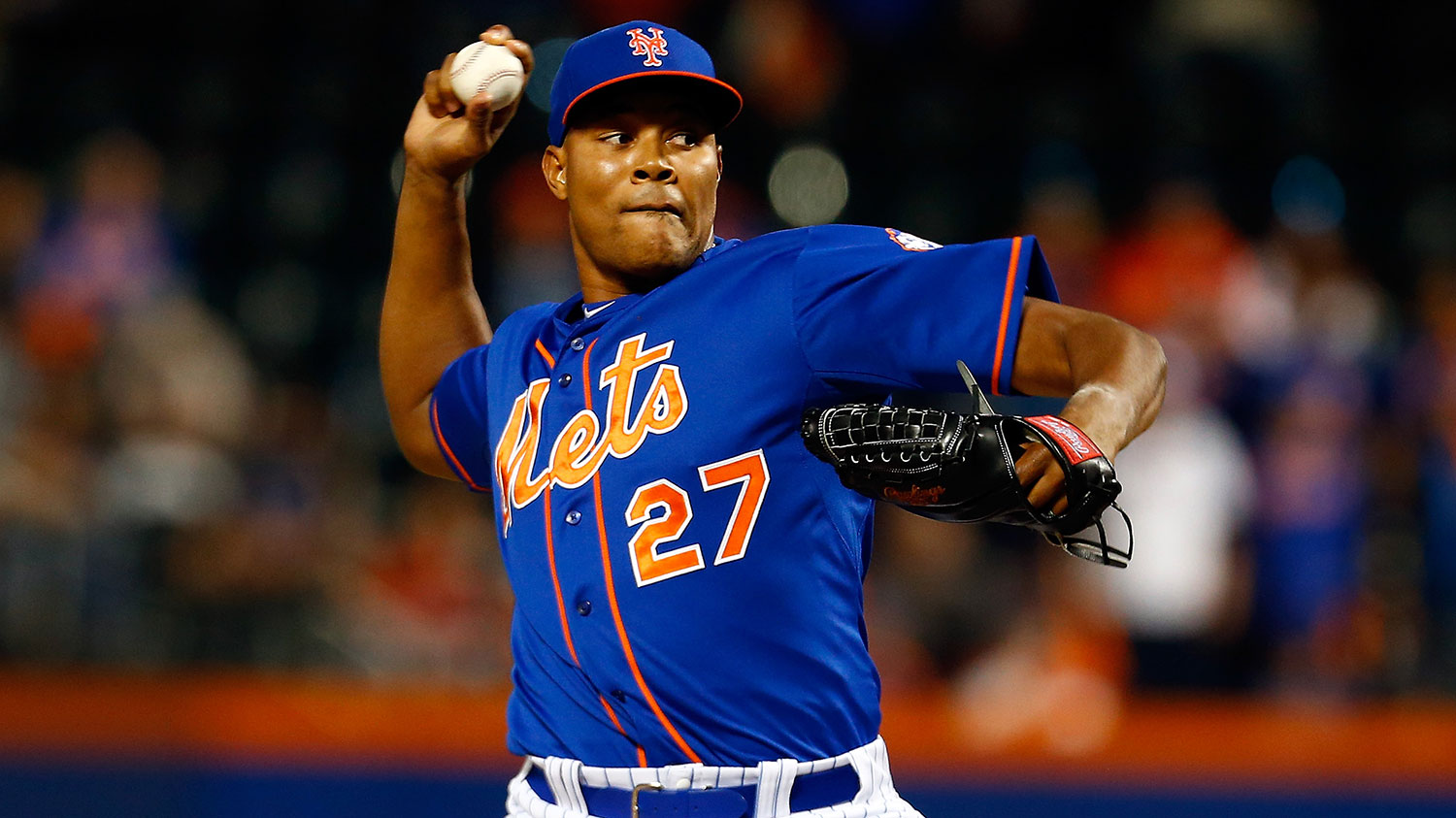 This could very well be how the series gets decided. The Mets appeared to significantly improve their bullpen depth before the July 31 and August 31 trade deadlines, acquiring Tyler Clippard and Addison Reed. But Clippard faded down the stretch, ceding the top setup job to Reed, who was a big contributor to that ugly, Chase Utley–fueled seventh-inning meltdown in Game 2 against the Dodgers. The Mets have garnered solid contributions from Hansel Robles and Erik Goeddel at times this year, but Collins looks unlikely to trust either one in a big spot.

For Collins, then, the key might be finding the right spots to use starting pitchers in key relief situations. Bartolo Colon appeared in three different NLDS games and looked very good at times — most notably in the sixth inning of Game 3, when he struck out the side. In an elimination game, don’t be surprised if Collins gets even more aggressive: Syndergaard’s first career major league relief appearance was a scoreless seventh inning in Game 5. Collins will also likely continue to ride his sensational closer, Jeurys Familia. In Game 5, Familia got his first crack at a six-batter save, and that led to six straight Dodgers going down meekly to close out the series. Familia retired all 16 batters he faced in the NLDS.

The Cubs, however, won’t have to do nearly as much bullpen scrambling. Maddon will have no qualms about purposely deploying his pen to get 15, 18, or even 21 outs if need be. Coming into the NLDS, the strikeout-happy trio of Pedro Strop, Travis Wood, and Justin Grimm looked to be vital. But in the series-clinching game against St. Louis, Maddon showed his trust in three pitchers — Trevor Cahill, Clayton Richard, and Fernando Rodney — who’d actually been designated for assignment earlier this year. Cahill and Richard are former starters who could be used to soak up multiple innings depending on matchups and how well they’re throwing on a given night. Add it all up and you have a bullpen that led the National League in park-adjusted Fielding Independent Pitching.

As for the benches, the Mets have righty-swinging, slick-fielding Juan Lagares ready and able to start against Lester, and to serve as their top reserve. Kelly Johnson provides a solid left-handed bat off the pine against right-handers. The loss of Juan Uribe to a chest injury does make the bus squad a little thinner, though. Chicago’s bench also got a little weaker with Baez taking over for Russell, but you’ve still got plenty of options off the pine. Those include Game 1 NLDS starting left fielder Chris Coghlan, capable lefty-hitting infielder Tommy La Stella, and speedy, versatile, fly ball–swallowing outfielder Austin Jackson, who’d be starting on many other clubs.

Throw in Maddon being one of the best tacticians in the game and we could see some pivotal sixth- and seventh-inning moments won by the Cubs. 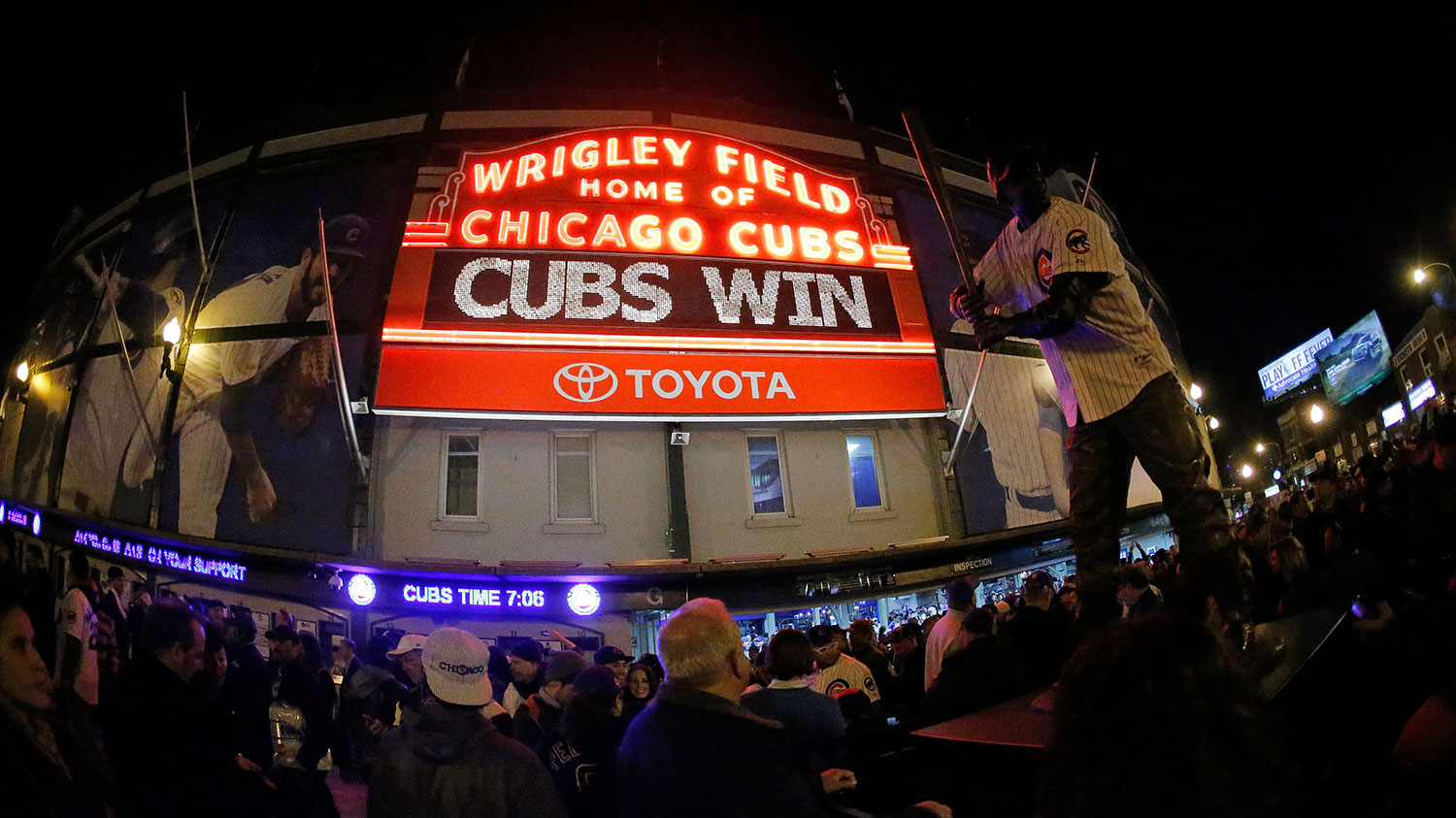 Jon Durr/Getty Image How many more times will the Wrigley Field marquee light up?

This series has the potential to be a classic, and I could easily see it going either way. With two teams so evenly matched, we’d need something closer to 269 games to ever really figure out who’s best. Still, with the Cubs carrying likely edges in the bullpen, bench, and manager departments, it’s not hard to imagine at least one 50-50 game going Chicago’s way at some point in this series. Thanks to the ability of Lester and Arrieta to hang with the Mets’ excellent young starters, and the damage that Rizzo, Bryant, and Schwarber can do every time they step to the plate, the Cubs gain a slight edge. Cubs in six.