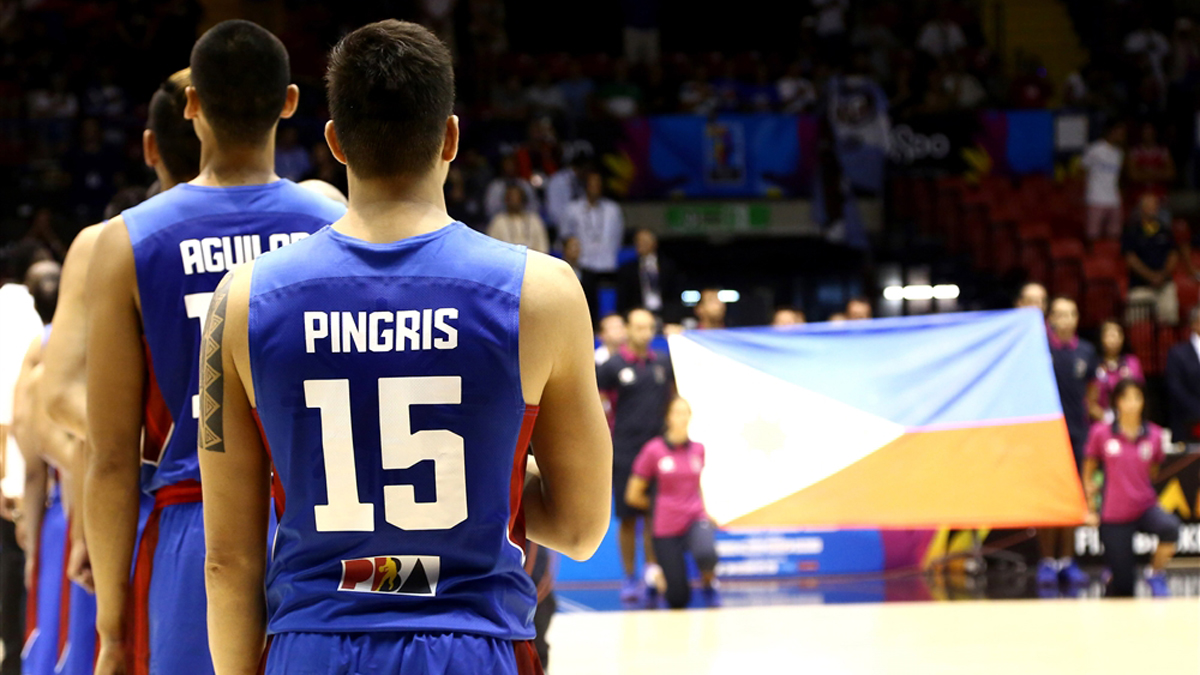 1. Darlings of the Tournament

At the end of July, when I visited the Philippine National Team’s pre–FIBA World Cup training camp in Miami, assistant coach Josh Reyes marveled to me about the kind of competition his team would face in Spain. I asked him what might happen if, during the Philippines’ game against Greece, 6-foot-11 Giannis Antetokounmpo got switched onto 5-foot-7 point guard L.A. Tenorio. How would Tenorio deal with a wing defender whose waistline would be more or less at his eye level?

“Just go under his legs,” Reyes joked, suggesting not that Tenorio would try to dribble the ball through Antetokounmpo’s legs but that he might literally try to run between the Greek Freak’s famously rangy limbs.

The point was that no one had a clue what would happen when Gilas Pilipinas, as the team is known at home, took the court against the world-level, NBA-caliber talent they’d be seeing in Spain. Before this year, the last time a Philippine team played in a world championship was 1978, when the oldest player on this year’s roster, captain Jimmy Alapag, was about 10 months old. Since then, the Philippine game has existed mostly in a regional bubble, with a rich history and a thriving domestic league but almost no exposure to elite international basketball. There was a chance that, despite the Philippine team’s talk about heart and pride, when they matched up against Antetokounmpo’s Greece or Luis Scola’s Argentina, all of those intangibles would amount to a hill of beans against teams that were more skilled, more experienced, and much taller.

That’s why Gilas naturalized NBA big man Andray Blatche — they knew he had the size and ability to compete at the highest levels of basketball. “He gives us the opportunity that in one position we might have the edge,” Chot Reyes told me back in Miami. But even so, if the rest of the Philippines’ players couldn’t compete, Gilas was doomed.

Well, the World Cup began this weekend, and the Philippines lost three games that answered all questions about whether they belong at this level: First, there was a 3-point overtime loss to Croatia, which the Philippines led in the last two minutes of both regulation and extra time; then, a cold-shooting meat grinder of a game with Greece where Gilas hung within 7 to 12 points throughout but never managed to close the gap; and finally, a four-point loss to Argentina on Monday. They’ve played so well that goals like “playing well,” inspiring Twitter plaudits from media personalities, and earning the respect of the NBA players and Olympic gold medalists among their group no longer feel suitable: The Philippines wants a win.

They have two more chances to get one: Wednesday against Puerto Rico and Thursday versus Senegal. But even if Gilas goes 0-5, which will be a disappointment, the Philippines will remember this tournament with enormous pride, and moments like Alapag’s unconscious heat-check run of five pull-up 3-pointers in the second half against Argentina, or 6-foot-5 Jean Marc Pingris bodying up with 7-foot, 270-pound Greek center Ioannis Bourosis in the low post and poking the ball away from him for a steal, or Blatche pounding his chest after giving the team a late lead against Croatia, will make up the latest chapter in the Philippines’ never-ending romance with basketball. 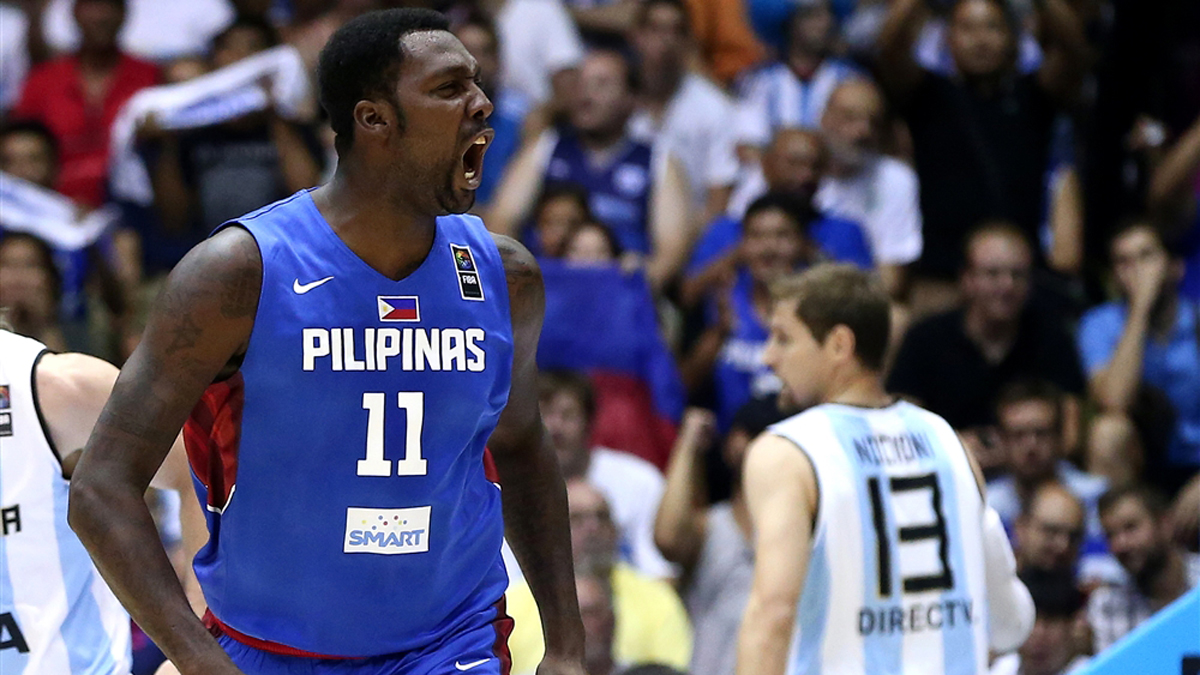 Before the World Cup began, the Gilas Pilipinas coaches were enamored of Andray Blatche’s versatile offensive game, and they were impressed with his early efforts to bond with his teammates. But they still didn’t know how a brand-new player with no native ties to Philippines would respond to adversity. When Gilas fell behind, would Blatche check out mentally, or would he fight back with the team?

Wizards and Nets fans who followed Blatche in the NBA may find this hard to believe, but Blatche has played his ass off for Team Philippines. Against Croatia, he scored 28 points and grabbed 12 rebounds, and made several big shots in the endgame. This came after he plunked about six straight long 2-point jumpers off the rim in the first quarter — exactly the kind of start that might derail a player with a reputation for inconsistency. But Blatche got himself back on track with a nice Euro-step drive in the second quarter, then adjusted his game to begin attacking the slower Croatian defenders off the dribble. Monday against Argentina, even though foul trouble limited Blatche’s minutes, he finished with 14 points and 15 rebounds and was one rimmed-out 3-pointer away from giving the Philippines a lead in the final minutes. And in the Greece game, Blatche had 21 points and 14 boards while skipping around on a bum knee he twisted the previous day. The Greeks guarded him with a quick-footed, caveman-looking forward named Georgios Printezis, and when Blatche recognized that he couldn’t drive by him as easily as he did the Croatian big men, he took Printezis into the low post and earned trips to the foul line. Blatche also showed an encouraging trust in his teammates against Greece. After Filipino center Junmar Fajardo bobbled a baseline pass from Blatche that cost Gilas a layup, Blatche again found Fajardo in transition on the Philippines’ next possession, and this time Fajardo caught the ball, went strong to the basket, and drew a foul. It was during this game that Blatche inspired former Great Britain national team coach Mark Clark, who has called all the Group B games, to say, “You just can’t say enough good things about Blatche,” which might end up being the most unlikely bit of color commentary to emerge from the entire World Cup.

Of course, Blatche has committed some costly turnovers, and the Philippines’ offense bogs down a bit more when he goes to work on the wing, but overall, Blatche has been playing with the heart — puso in Tagalog— that Gilas Pilipinas has made its trademark. Besides, there’s something inspiring about watching a player like Blatche, who has been known for underachieving, turn his time with the Philippine team into a miniature redemption tale. It’s possible that performing well in Spain will impress NBA front offices and help Blatche, who’s currently an unsigned free agent, land a better contract before next season. It’s also possible that GMs will look at his play at the World Cup and say, “That’s nice, but I’m not sure how Blatche playing point-forward and averaging 14 rebounds per game on a team with two 6-foot-5 power forwards and three sub-6-foot point guards translates to our league.” But Blatche’s NBA prospects after Spain aren’t really the point. When you watch these games, you don’t get the impression that Blatche is playing for a contract; you get the feeling that he’s part of an undersize team that plays with all the passion of the world’s most basketball-crazed nation, and that Blatche, like all of his teammates, is doing anything and everything he can to get a win for the Philippines.