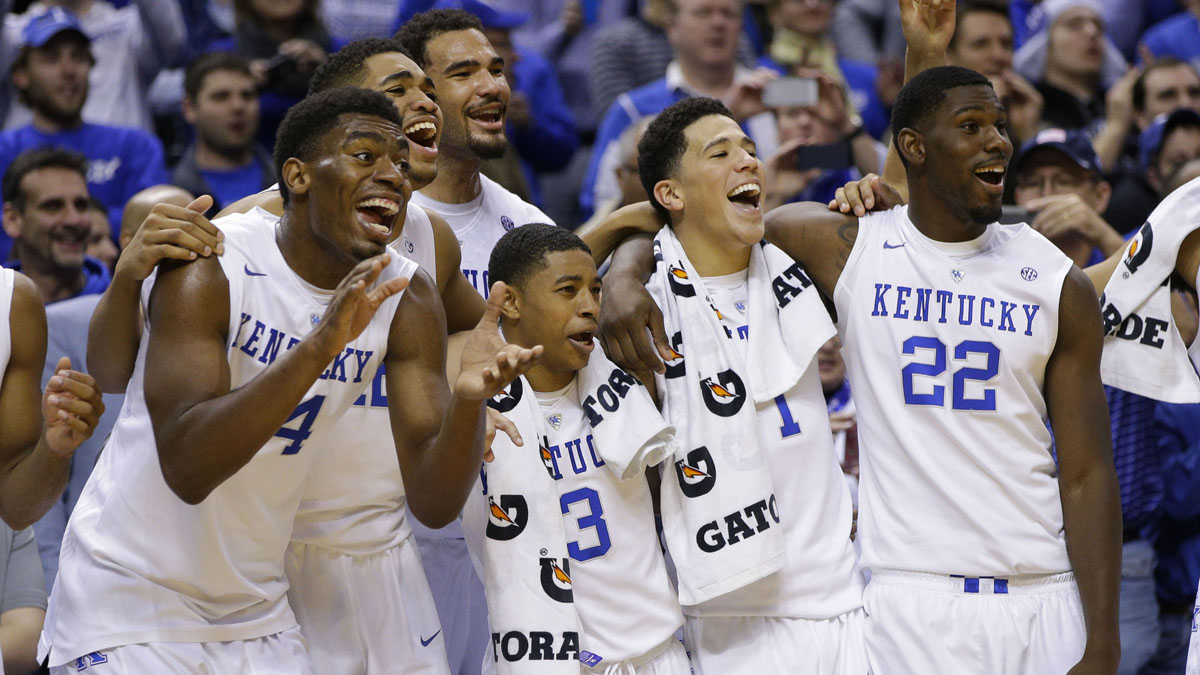 I was at the Champions Classic in Indianapolis last night. It was fun. Here are some things I noticed.

Take the Final Four. Then put it in a basketball arena, cut out the corporate seats, remove the student sections, and serve alcohol. Boom: You’ve got yourself the Champions Classic. There was a buzz in downtown Indianapolis leading up to the games. Bankers Life Fieldhouse was packed. Seemingly every living member of the sports media — including Kirk Herbstreit and Stephen A. Smith! — was there. ESPN set up a studio in the arena and even busted out the overhead-camera-on-four-strings contraption. That’s how you know it’s a big deal.

And yet, something was off. I blame the lack of student sections. No insults were chanted at players. No mobs of college kids were there to bounce on the balls of their feet while yelling “OOOooooOOOoooohhhh!!!” Duke didn’t even bring cheerleaders or a band. As a result, the Duke–Michigan State game was played in an eerie silence that was only broken after huge plays or when the drunk MSU fan behind me yelled, “Goddammit, Costello!” Kentucky fans pumped some life into the place during the second game because Kentucky fans are out of their minds. But for half the night, it felt as if the best things about college basketball were replaced by the worst things about the NBA, and ESPN pointed cameras at the result and told everyone it was awesome.

2. Duke is attempting to play defense this season.

Don’t get me wrong — the Blue Devils aren’t even close to good defensively yet. Michigan State’s offense was brutal and the Spartans still shot 50 percent. Duke was obliterated on the boards and there were times when it struggled staying on the same page defensively. But at least you can tell that defense matters to these Blue Devils, which is more than could be said about last year’s team. Duke’s offense has the potential to be stupid good, so even a little defensive effort can go a long way.

3. Travis Trice is thisclose to trying to morph into 2007 Drew Neitzel. 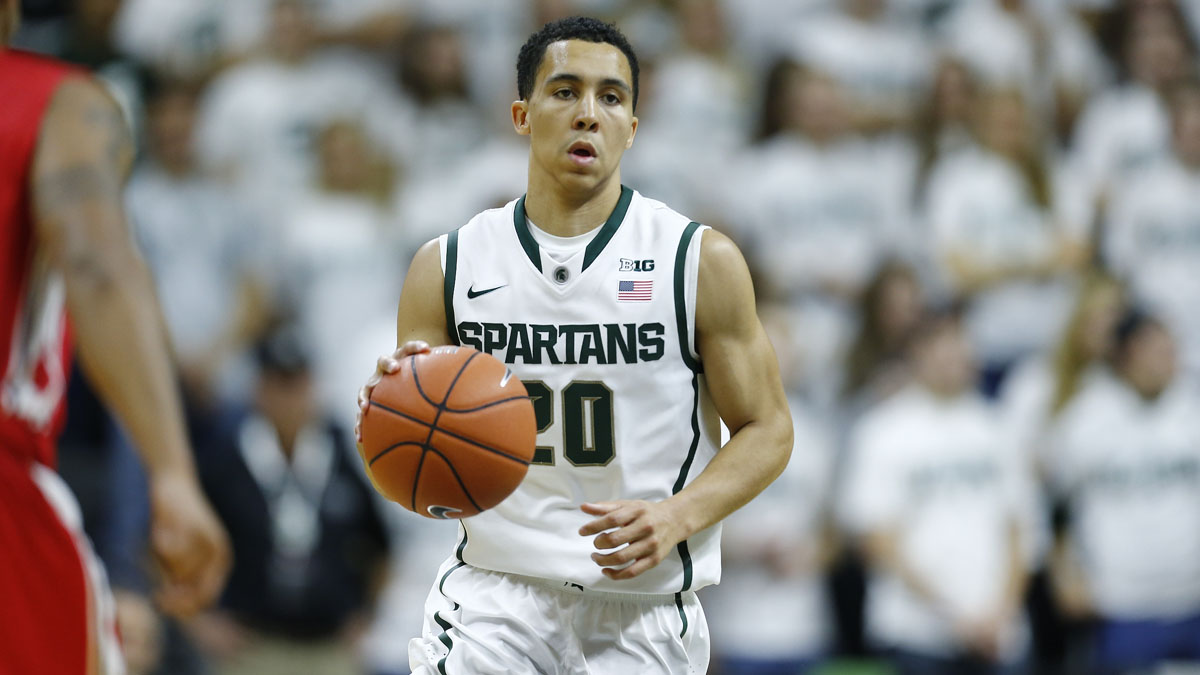 And by that I mean there were long stretches against Duke when Trice wouldn’t take his eyes off the rim while he had the ball. If this trend continues, Trice could be accounting for Michigan State’s entire offense by the time conference play starts. This will be fun.

At one point last night, Mykhailiuk grabbed an offensive rebound, dribbled away from the basket to the 3-point line, turned around to face the rim, and immediately let a shot fly. He attempted five shots in 23 minutes of play and all of them were 3s. I don’t care that if you asked me to pronounce his name, I’d just make a fart noise with my armpit — Sviatoslav Mykhailiuk is my new favorite player in college basketball.

I ask you this, Kansas fans: Do you trust Perry Ellis as your team’s no. 1 option? Because there’s a 17-year-old Ukrainian with balls of steel who will take you on a marvelous four-year ride if you’ll let him.

5. Kentucky is bigger than you think, no matter what you think.

Take a guess at how big you think Kentucky’s players are. Wrong. They’re bigger than that.

No matter what happens this season, I’m going down with the ship on this one. The platoon system had nothing to do with Kentucky blowing out Kansas. Kentucky blew out Kansas because Kentucky has a million times more talent. John Calipari would’ve achieved the same result with any substitution pattern.

Also, I hate the platoon system because it’s cutting Dominique Hawkins out of the rotation.

8. Don’t overreact to either of these games.

It’s November. The Champions Classic is a fun way to kick off the college basketball season, but don’t be fooled into thinking that these games matter in the big picture. None of these teams will look the same by March. 2004 UConn lost to Georgia Tech by 16 in November and ended up beating the Yellow Jackets by nine in the national title game. Calm down, everybody.

HOLY HELL — DID YOU SEE HOW DOMINANT THE WILDCATS WERE?! I’d crap my pants if they did that to Grambling State. But Kansas? The Jayhawks have multiple first-round picks and they couldn’t even get the ball to the rim. I have no idea how any team will be able to beat Kentucky this year. This team really might be better than the 2012 team. Hell, they might even be better than the Philadelph—

[Lightning strikes all around me as a voice from the heavens says, “Stop.”]

10. How to fix the Champions Classic.

First, the Champions Classic should be the official start of the college basketball season. The second Friday through Sunday of November every year would be reserved for the Champions Classic. No games can be played on or before that weekend. And yes, you read that right — Friday through Sunday. Let’s make this bad boy a tournament where the winners of the first games play each other and the losers of the first games play each other after a day of rest. How are you going to put the word “champion” in the name of an event and not crown a champion?

I’m not done. Here’s where I blow your mind: The four teams that participate in the Champions Classic every year should be the top four teams in the preseason AP poll. Imagine Kentucky, Arizona, Wisconsin, and Duke kicking off this season with a tournament.

I know what you’re thinking: Teams set their schedules long before the preseason poll is released, so it will be impossible to organize the tournament. True, but it’s easy to predict which teams will be in the top five or 10 before schedules are finalized. Just pick out a group of 10 teams that we’re certain will contain the preseason top four and have them all block off time for the Classic. Then recruit six tiny schools to play games against yet-to-be-named opponents. When the poll comes out, the top four go into the Champions Classic and the rest get paired with the cupcakes. The Classic is played on Friday and Sunday, and the rest of the country starts their season on the following Monday.

Throw in some student sections, cheerleaders, and bands, and you’ve got the most kick-ass start to a season in all of sports. Done and done.

Embrace the Dark Side: How the Rockets Became the New Bad Boys