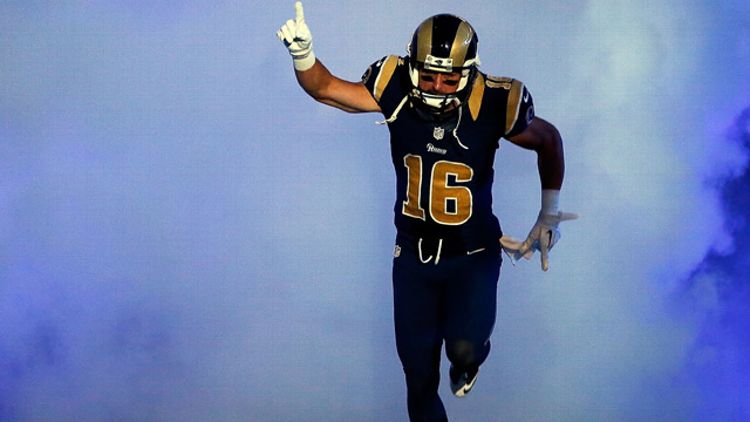 Reminder: These pieces are written from the perspective of an agent trying to hype up his client as he’s about to hit free agency. My goal in writing these isn’t to be accurate (or to lie), but instead to employ whatever arguments I can to make the player in question look as valuable as possible. For more background, see Wednesday’s piece on Reggie Bush and last year’s introductory piece to the series on Mike Wallace. Today’s free-agent target: Danny Amendola.

What does a star NFL wide receiver look like? Think about that and you might come up with Calvin Johnson or A.J. Green, freakish athletes capable of beating any defensive back to any pass thrown remotely in their direction. It’s true that they’re the prototypes, but wide receivers like that don’t come available very often. If you can’t get an All-Pro wideout, your next option is to choose between two types of players. One school of thought sees teams shell out exorbitant amounts of cash for cheap imitations of the Greens and Megatrons of the world. They pay for a guy who can jump but can’t run routes or catch and get Chris Chambers. They opt for the route-runner without any jets and end up with T.J. Houshmandzadeh. They throw their money away chasing an impossibility; those guys will never become Calvin Johnson.

Other teams take a more logical approach: They try to sign somebody who does the best job of being himself. Danny Amendola will never be Calvin Johnson, nor should he try to be. What Amendola can be is an incredibly efficient, effective weapon within a passing attack. He can be a safety valve and a reliable pair of hands for a young passer. He can be a chain mover for a team with big-play weapons, a guy who works underneath and torments defenses who can’t cover him. In fact, Amendola’s unique set of skills makes him a player who can help define coverage: A defense can reveal much of what it intends to do post-snap just in its reactions to Amendola’s nonstop motion before the snap. Cover him with a linebacker or a safety and he’s too fast; stick a cornerback on him and he’s too strong to jam. He’s also effective when finding holes in zone coverage. In a league where the Nickel is becoming the new base defense, would you rather go into free agency and come away with an above-average split end or the guy who will be the best slot receiver in football over the next five years?

Understandably, Amendola’s spent most of the past five years being compared to Wes Welker. Amendola arrived to Texas Tech in 2004, the year after Welker finished his senior season of eligibility. By the time Amendola himself was a senior, he had begun to post Welkeresque numbers. As a senior, Welker caught 97 passes for 1,099 receiving yards and nine touchdowns. During his senior year, Amendola caught 109 passes for 1,245 receiving yards and six touchdowns. Welker was used primarily as a special-teamer before finally catching on with a bad team with a limited quarterback, the 2005-06 Miami Dolphins; likewise, Amendola did whatever was asked of him and battled to make his way off practice squads before becoming a regular on the St. Louis Rams. It doesn’t take much to notice the similarities between Welker’s final season with the Dolphins and Amendola’s final season with the Rams:

There’s one very important difference between those two lines: Welker produced those numbers over 16 games. Amendola amassed those numbers in just 11. Prorate Amendola’s production to a full 16-game season and he finishes with 92 catches for 968 yards and four touchdowns. Welker only had 96 professional catches altogether before leaving for New England and becoming one of the most exceptional wideouts of his generation.

On a per-game basis, very few wideouts can compare to Amendola’s consistent, reliable output. Last year, Amendola averaged 60.5 yards per game. That puts him right alongside highly paid receivers like Antonio Brown (60.5 yards per game), Anquan Boldin (61.4), and Dwayne Bowe (61.6), and ahead of prominent wideouts like Miles Austin (58.9), Mike Wallace (55.7), and Larry Fitzgerald (49.9). Amendola also caught 62 percent of the passes thrown to him, a figure that actually rates below his previous career catch rate of 69.4 percent. That’s a reliable, efficient, and effective target for any quarterback.

It’s true Amendola has had some issues with injuries during his professional career. He tore his triceps during the opening week of the 2011 campaign, and he dislocated his collarbone this past year. What’s important to note about those injuries is that they’re not exceedingly likely to recur; they’re not a nagging hamstring or lower-leg injury that can stick around for years, as it has for the likes of Austin. Furthermore, while perception might suggest that smaller players like Amendola would be more likely to incur injuries, that hasn’t been the case. Welker has had a mostly healthy career beyond his torn ACL, and he was able to come back from that injury within eight months. Welker’s undersize predecessor in New England was Troy Brown, who had a lengthy career mostly unaffected by injuries until Brown entered his late 30s. While Amendola has been hurt at times in the past, he should be a healthier player going forward.

One undeniable fact: The Rams have been a significantly better team with Amendola in the lineup. Since the beginning of the 2010 season — when Amendola became a regular in the St. Louis offense — the Rams are 12-15-1 (.444 winning percentage) in games where Amendola plays and a staggering 4-16 (.200 winning percentage) during those games without Amendola active. Prorate those figures to 16-game seasons and the Rams have been a 7-9 team with Amendola around and a 3-13 team with him on the sideline. Football is a team sport, but it can’t be an accident that the Rams play significantly worse when Amendola isn’t suited up for action.

At the end of the day, you have to sit back and ask yourself what you’re shopping for. Danny Amendola isn’t the biggest name on the market. He’s certainly not the biggest receiver. What he is, though, is a productive receiver entering the prime of his career. Amendola doesn’t turn 28 until November, so any team that signs him can expect to get Amendola’s peak years as a receiver, not the mid-30s seasons of a player like Wes Welker. The Patriots traded for Welker as he was about to turn 26 and enjoyed the fruits of an unheralded player entering his prime in the ideal offense for his skills. Now, here’s your chance to do the same thing, but with a player who has outproduced Welker at similar stages of their respective careers. Danny Amendola isn’t the next Wes Welker. He’s the only Danny Amendola.