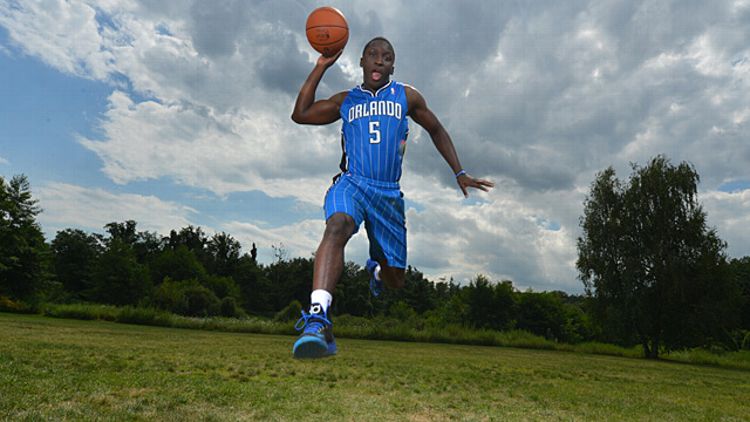 Twelve months ago, I got a divorce from the New York Knicks. It had been 30 years. Too much James Dolan, not enough Charles Oakley. Single for the first time, I had a dalliance with an easy target, the rebuilding Denver Nuggets. Low stakes, high fun, JaVale for laughs, Gallinari for joy. It was easy, and then it was complicated. The lowly, youthful, free-spirited Nuggets somehow became the 57-win no. 3 seed Nuggets, a team with expectation and thrills and Andre Miller’s scowl. Then the Splash Brothers put a hole in their heads (and another dent in George Karl’s résumé) and now it feels like the Nuggets are dead. But I am not dead. I am alive. And so I have left Denver’s corpse in a ditch and shuffled off in search of a new mistress. (This sounds terrible.)

Oh, hello Orlando. You have things I find appealing. Young talent. A thoughtful general manager. A rugged head coach named Jacque. A hilarious white big man. (I’ll miss you, Kosta Koufos.) A team named after mysticism. A cozy corporate partnership with Grantland’s parent company. A Big Baby. Last year, young genius GM Rob Hennigan snookered Tobias Harris (and also Doron Lamb!) from the Bucks for a J.J. Redick rental. This happened just six months after hauling in Arron Afflalo, Moe Harkless, Nikola Vucevic, and three first-round draft picks (including, ironically, one of the Nuggets’ two first-round picks in 2014) for Dwight Howard (who was not staying in Orlando) and Jason Richardson’s soul. The latter deal looked like a helicopter-crashing-into-a-skyscraper disaster at the time, but Dwight’s a world-class pain, Vucevic and Harkless can actually play, Afflalo has always been a useful (if one-dimensional) scorer, and the cap flexibility and draft picks have major utility for a young squad. A sack of nickels amounting to a dollar never feels as good as a crisp single, but it gets you the same number of doughnuts.

With the bulky but efficient Harris — a Melo/Rudy Gay hybrid who scores well — in the fold, that’s three legit under-23 pieces. Now Victor Oladipo is here. Victor Oladipo! VICTOR OLADIPO. VICTOR OLADIPO! His missed dunks are like failed second novels from wunderkind authors — disappointing, but what risk! He is a treasure to watch; he appears to be driving himself insane on every possession, consumed by the need to be ubiquitous. He is Ed Reed and Benedict Cumberbatch and a frothing roadrunner all rolled into one. Oladipo already fancies himself a lockdown defender, and head coach Jacque Vaughn is tasking him with some offense-running duties — we’ll see about those things. Ideally, Oladipo works alongside a steady point guard who can shoot, allowing him the chance to slash, take risks near the rim, and frustrate defenders by darting around screens. If he can’t do that, at least it’s a repertoire-expanding experiment. This year will probably be about losing, and hopefully not more than the 62 games they dropped last season.

But there’s a part of me that’s thinking it doesn’t have to be. Veterans Jameer Nelson, Glen Davis, and Afflalo will be playing real minutes again this year, and this team minus Oladipo started 12-13 last season before Big Baby went down. The race for the nos. 6-8 seeds in the East is far from settled. What if the Wiz are too thin on the front line? What if the Pistons’ front line is too crowded? What if the Hawks are secretly tanking? What if the Bucks had the worst offseason ever? Anything is possible.

For me, there are some personal biases in play: Harkless is easily the best St. John’s product to come around since Ron-Ron Artest was using his elbows the way Raphael uses sais. I share Swiss roots with Vucevic, who has flashed stunning 20-20 potential and looks like maybe he can scale the Alps sans climbing gear. And Harris played high school basketball at Islip, New York’s Half Hollow Hills West, a school just six minutes from my hometown. Along with that, Afflalo is a personal friend of Kendrick Lamar. And even if the tendrils of my personal connections mean little to you, there is always the power of a mix. Like this one featuring Harris, set to Will Smith’s “Lost & Found,” which is definitely your favorite rap song.