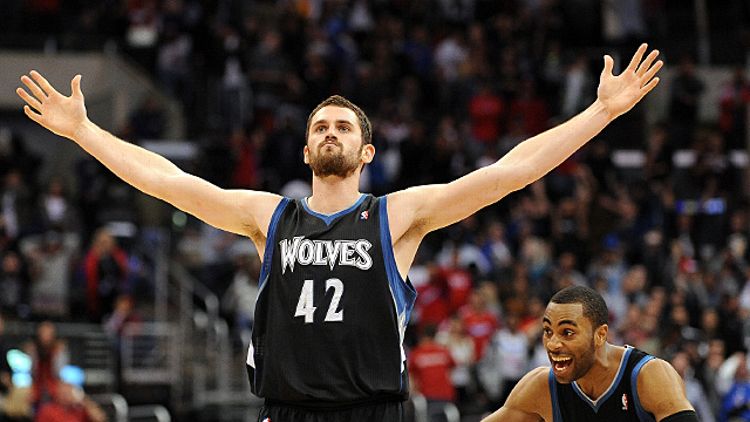 “The past is never dead. It’s not even past.” —William Faulkner

Kevin Love has a bone to pick with Faulkner. For almost his whole career, Love has thrived on proving people wrong, whether it was Kurt Rambis telling him not to shoot 3-pointers or anyone who doubted he could be a go-to scorer or questioned whether he was “athletic” enough for the NBA. His 2011-12 season was a garlanded rebuttal to those questions about his playing ability: He finished in the top five for points and rebounds per game, PER, rebounding percentage, and win shares, plus made his second All-Star Game appearance and won the 3-point shooting contest there.

But then came 2012-13. A fluke hand injury stole the first chunk of the season from him, and when he returned ahead of schedule he shot a miserable 21.7 percent from beyond the arc (by far the worst showing for a reigning 3-point shootout champion and second only to Tim Legler’s 1996-97 season, when he shot 27.6 percent from distance after coming back from a torn ACL). Before he could find his shot, he was out again after re-breaking his hand and never returned, eventually opting for season-ending knee surgery to clear out scar tissue from a previous injury.

All the injury woes would have been bad enough. But into the middle of that lost season dropped an interview in which Love gave voice to needling concerns about his relationship with the Wolves. That he had many valid points about questionable decisions made by former GM David Kahn and others hardly seemed to matter. Many fans took it as the petulant whining of a player who hadn’t proved himself yet, and turned on him.

His tone at this year’s Timberwolves media day was considerably different. “We all know what happened last year,” he said. “We just want to move forward.” He cut off a reporter who asked about picking up his option in 2015 by saying, “We’re just going to get better day by day.” When a reporter grazed against Love’s issues with Kahn, he replied simply, “The past is the past.”

But it’s just not, and Love and his elephantine memory know it. Wanting to forget something is not the same as forgetting it, and forgetting it is not nearly the same as having forgotten it. This isn’t Eternal Sunshine of the Spotless Mind. Love can’t erase what happened; he can only redact it, and right now he’s working furiously with the biggest, blackest Sharpie he can find. If he returns to All-Star form, if he leads the Wolves into the playoffs for the first time in nearly a decade, that burned year will be when he grew up, when he turned it around for a snake-bitten franchise. If he and the Wolves stumble, then last year will look like the first stone paving the way out of town.

The fan in me — the one who followed the Wolves from afar before moving to Minneapolis just in time for their run to the Western Conference finals in 2004 — wants the former. Obviously. But what all of me wants maybe even more than that is for Love to get to truly test himself without the distractions of injuries and contract negotiations this year and simply to see — to see what he and this team are truly capable of doing, and to come through the season that’s laid out before us and understand a little better. As Faulkner also said, “This is not anything yet. It all depends on what you do with it, afterward.”

The Weekend in Hockey: What's Wrong With the New York Rangers?