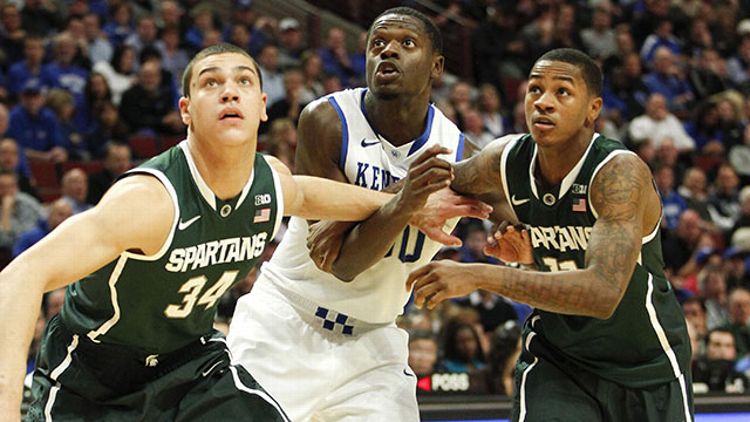 The Champions Classic is in the books, with Michigan State surviving against Kentucky and Jabari Parker defeating Andrew Wiggins (historical footnote: Kansas would win the actual game), and, in the true spirit of college basketball, it was both joyous and aggravating. The basketball was transcendent at times, in a way we don’t often see at the college level, but the referees were steadfast in calling handchecks and arm bars and other contact fouls to the extent that Duke-Kansas, originally scheduled for a 9:30 p.m. ET start, didn’t finish until nearly 1 a.m.

Let’s explore the full range of the good, the bad, and the ugly, from what might be the best night in the sport at least until January.

Last May, the NCAA Men’s Basketball Rules Committee met with a chance to rescue college basketball from its ongoing doldrums. The aesthetic quality of the sport … wait, this is sounding really familiar. Did I … yes, I already wrote this. Hooray! So much work saved. If you’re inherently suspicious of links, the basic thing you need to know is that college basketball had become mired in ugly physicality, and the NCAA finally did something about it. (And by the way, the thing it did was insist that referees enforce current rules. Nothing actually changed.) You’re going to hear a lot of people complain about games becoming foul shooting contests, because, hey, shortsighted complaining when people try to make long-needed improvements is pretty much what we do in this country. But trust me, this is a good thing. When teams finally learn to play legal defense, you’re going to see a free-flowing, high-scoring game that highlights athleticism, and it will be awesome. So just tough it out and try to spread the message if possible. The game needed this badly, and even though it can be frustrating to watch, I couldn’t be happier that the refs aren’t crumbling in the face of public pressure. The new era is here to stay.

If you missed John Calipari’s pregame whining, he told reporters it was “unfair” for his group of freshmen to play in such a high-profile game so early in the season. Tom Izzo responded that he was welcome to forfeit, and the whole thing became kind of funny. But while Cal’s lowered expectations were probably just tactical, you saw the benefits of experience in the first half of Michigan State–Kentucky, when the Spartans ran out to a double-digit lead and the Cats looked lost. Experience is a fragile commodity, though, and it almost failed Izzo in the framework of a single game. Freshman Julius Randle woke up and Kentucky roared back, tying the game before Michigan State’s upperclassmen (Keith Appling, Adreian Payne) and sophomore Gary Harris responded with a run to ice the game. And in Duke-Kansas, Jayhawks sophomore Perry Ellis kept his team in the game when Wiggins vanished in the first half. So, yes, experience counts, but talent doesn’t take long to cover the gap. Especially in Kentucky’s case, November might be the last chance to take advantage of a team’s youth.

3. On the Other Hand, Kentucky May Be Fatally Flawed

What happens when you have a college team that includes John Wall, Boogie Cousins, and Eric Bledsoe? If you can’t shoot, you still manage to lose. This Kentucky team lacks sharpshooters, and it’s not great at the foul line, either. The rule enforcement on touch fouls will help them, as will the new offense-friendly charge rule, but teams can still try to stop the Cats by packing it in, doubling and tripling Randle, and forcing them to make bombs. For most, that won’t be enough; we already know the Cats will storm through the SEC, and Florida’s loss at Wisconsin last night makes it seem like even a road game in Gainesville might not trip them up. But it’s hard to win six consecutive games in March if you can’t shoot, and if the notion of Kentucky going 40-0 was always foolish, we might have to say the same about a national title. If Kentucky wins, it will be with transitional play, defense, and strength underneath. But they’re missing the Doron Lamb/Darius Miller/Kyle Wiltjer types from the championship year, players who can hit from deep and make teams pay for clogging the lane.

This team has no interior defense in the same emphatic way that Holland has no naval defense. Throw in an unreliable point guard who can’t guard anyone, a shaky sophomore “big man,” poor rebounding, and a Plan B that includes Marshall Plumlee, and you’ve got yourself a definite ceiling. That ceiling, sad to say, does not include a national championship. But as a Duke fan, do I care?

I’ve never been less concerned about a major Duke loss. Ever. The ridiculous Davidson game on Friday (first 70 percent shooting night for Duke since 1985!) and last night’s show on a national stage against Kansas were both so much fun that I’m totally enamored of this team and could not care less about the loss. This MAY sound New Age–y and annoying, but as I get older, I’m becoming more of an “aesthetic” fan. I want my team to be fun, and to play fast, and to be entertaining. If that style means it can’t win a championship because it isn’t gritty and strong and huge, so be it. In the first half last night, Duke attempted 12 3-pointers, and I think most of them came within the first 10 minutes. Coach K has five guys who can run, shoot, and generally be spectacular. Quinn Cook at point guard is a crazy, exploding spark plug who will probably do more harm than good in the big games, Rasheed Sulaimon takes most of the team’s huge shots in a way that is frankly terrifying, Rodney Hood might be the most exciting passer off the dribble-drive in the country, and then there’s Jabari …

Ahhh, Jabari. He ran out of steam to some degree in the second half, but before that it was a total showcase. I can now confirm he is the best Duke freshman since Kyrie Irving, and even though he’ll be in Durham for only a year, it’s going to be fantastic. This Duke team is a throwback to the 2001 national championship squad, except it has no good big man and the overall talent is inferior. The style, though, is equally exciting, and although Duke haters will always find a way to hate Duke, they’re going to have that sinking feeling of being on the wrong side of the moral crevasse. In a sport that’s trying to become less boring, Duke is the standard-bearer, and that’s an awesome feeling as a fan. We’re basically the 1974 Brilliant Orange Dutch soccer team. Yeah, we’ll probably lose to the strong, clinical equivalent of the Germans, but come on … would you really want to be the Germans? Not me.

B. Randle. Unstoppable at this level in the post. Watching him score while being triple-teamed by Spartans was a definite “uh-oh” moment. On the other hand, I think I’m starting not to like him because of the one-man Kabuki theater that played out last night. People get mad when you try to interpret character from on-court behavior, but damn, he’s easily the most expressive player I’ve seen this year. He’s the kind of guy who will roll his eyes at the drop of a hat, has never seen a foul he liked, and seems to be tolerating advice from Calipari at this point. I could be completely wrong about him, but it feels like a pretty short step from what we saw last night to the horrors of “bad body language,” and the Harrison twins aren’t too far behind. I can easily see Randle slipping into “I don’t give a shit” mode at the first sign of trouble in March, and can you blame him? Dude has some serious money waiting at the end of this journey.

C. Wiggins. He ended up with 22 points, so we’re going to see headlines like “Andrew Wiggins keys Kansas.” But other than a nice step-back jumper at the end, ole Ender made a bunch of open dunks and otherwise disappeared. Even for a lottery-bound blue-chipper, it can take time to adjust to the college stage. He’ll be fine, but you can already tell his personal battle will be to assert himself within games.

Secretly Awesome: Wayne Selden. He’s one of those guys who needs to exist on every national championship team. We’ll call it the Wayne Ellington Prototype. Not a star, but so good that he can score on his own for long stretches, keep a team in games, and generally pose a big enough threat that the stars have an easier time working their magic.

8. Wait, When Did Perry Ellis Get So Good?

You can’t say enough about the way he played last night. He had the unfortunate job of trying to stop Parker on defense, especially in the second half, and he still managed to put up 24 points on 9-of-13 shooting to keep his team close when Duke was in showcase mode. I can’t quite get the hang of this Kansas team yet, but Ellis’s enormous leap in the offseason makes me think it’ll be damn hard to keep it from another Big 12 championship and a Final Four berth.

Outside Chicago, VCU started off its season with a big road win over Virginia, and it included our first DAGGER of the season. Take it away, Treveon Graham:

It’s always great to see one of college basketball’s most entertaining teams win, especially when facing a real bore like Virginia. It’s havoc you fear.

In the fourth big game of the night, Wisconsin avenged last year’s throttling and beat an undermanned Florida in Madison. Neither team reached 60 points, which means Bo Ryan will be giggling merrily in his sleep all week.