Tyler, The Creator Returns to Jimmy Fallon With New Song, Plays the Piano, Jumps on Some Stuff 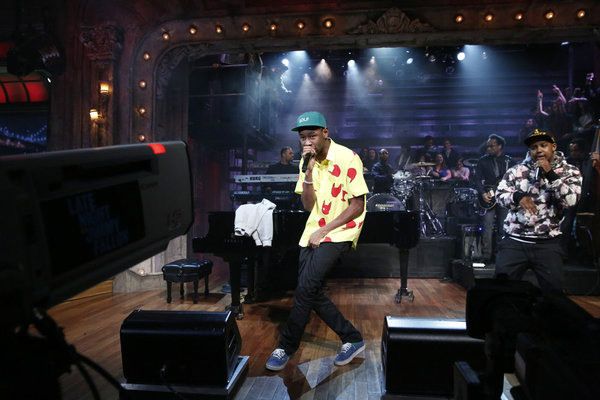 “If Odd Future does blow up, this appearance will be mentioned (“the first time that a national … ” blah blah blah) in every bio of the band forever.” – Amos Barshad, 2/17/11

Amos is an oracle.

It’s a performance that, some two years later, is still culturally relevant. The Odd Future collective’s first nationally televised performance, “Sandwitches” by Tyler, The Creator and Hodgy Beats, backed by the Roots, on Late Night with Jimmy Fallon.

From the pre-performance “Free Earl” yell to the full-faced beanies to the gnomes to the Supreme gear to the girl from The Ring on stage to terrorizing Jimmy and his guests mid-performance, it was the perfect introduction to a subculture that hadn’t yet fully broken through on the national stage, but was set to bubble over because of its passionate legion of young, angst-filled, mosh-inclined followers.

It was like being a Division III running back, sneaking into the combine, running a 4.42 forty, and then having Mos Def repeatedly yell “SWAG” in your honor.

Fast-forward two years, and Tyler, The Creator was back on Late Night, an episode headlined by Donald Trump, for his second appearance on the show that took a chance on him. After viewing, it’s clear some things have changed and some are exactly the same.

Earl is free, so there’s no need for those chants, and there’s no need to be draped from head to toe in Supreme because Odd Future now has their own clothing line. Yes, the Roots are still backing him, but instead of diving into a deranged rap song, Tyler smilingly began his set by playing the piano part from his jazzy tune, “TreeHome” from his upcoming album Wolf, only adding in the occasional ad-lib while Coco from the highly underrated band Quadron sang along.

I really liked it, but I was caught off guard. Tyler had gone from Slipknot to Billy Joel. Go figure.

Edith Piaf hour was over. It was time to jump on the piano and scream.

With the help from his Odd Future affiliates, occasional rappers/full-time hype tweens Jasper and Taco, it was again time to act a fool on the Fallon stage. While “Domo 23” is no “Sandwitches” and the follow-up Fallon performance wasn’t as mind-blowing as the first, it’s always great to see Tyler continue to buck every rule of what’s appropriate on network television.

And, while he is most certainly maturing as an artist, don’t think he’s forgotten where he came from.