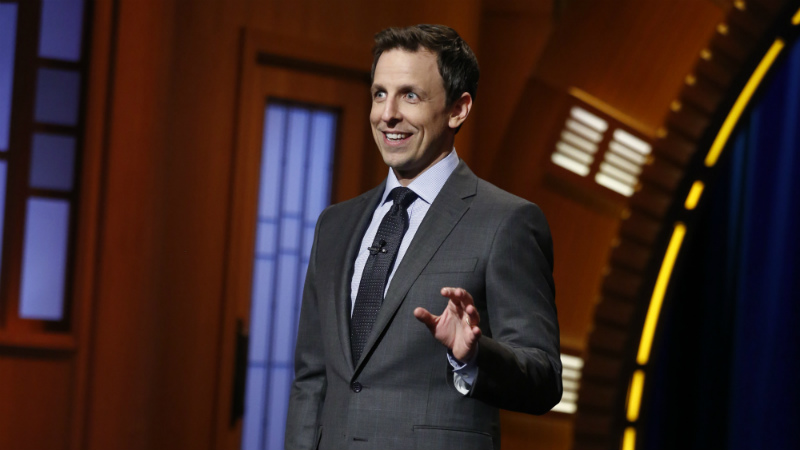 Earlier in the week, I wrote about Jimmy Fallon’s new Tonight Show and the way his ascendency has established comedy’s new all-access era. Left out of that piece was Fallon’s new battery-mate, Seth Meyers. Here are a few thoughts and observations from the first two weeks of Late Night.

Whenever a new talk show is launched, the first few weeks of press are invariably focused on the “learning curve” for the host. Is he jittery? Is he flopping or just flopsweating? And where, oh where, is he supposed to put his hands?

None of this has been relevant to Seth Meyers. Over the past two weeks, it’s been made abundantly clear that he’s the most prepared person to get one of these jobs in over two decades. Part of this has to do with where he’s coming from: just across the hall at Saturday Night Live, where he spent eight years telling jokes and conducting weirdo interviews from behind the desk at “Weekend Update.” But part of it is his own natural charm. With his crisp delivery and a chummy good cheer, Meyers could smooth over even the bumpiest of rooms. He’s good with punch lines but even better in the space between them, when his puckish grin and admirable patience can perform triage for dying gags. Meyers is already unflappable in a way his post-Letterman Late Night predecessors, the bubbly Jimmy Fallon and the jittery Conan O’Brien, never were. Most talk shows veer and lurch. Late Night With Seth Meyers glides.

And yet, isn’t that sort of a problem? One of the appeals of late-night television is thin stream of anarchy perpetually bubbling just under the surface, the palpable feeling that anything could happen at any time. By making everything look easy, Meyers robs Late Night of that electric feeling of potential doom. (The one exception to this: the awkward moment between the introductory applause and the beginning of the monologue. It’s a relatively benign transition that appears as challenging to Meyers as a triple lutz.) On “Weekend Update,” Meyers was the ultimate straight man — that’s what Stefon said — and an efficient conductor of the crazy train. Thus far on Late Night, his desire to make everyone else look better has, on occasion, allowed his own talents to be overlooked.

That’s probably why the strongest elements of the show have emerged from the improvised banter between Meyers and his surprise choice for bandleader, Fred Armisen. Most things introduced in a talk show’s first weeks don’t last long — already Meyers has ditched his cathedral-windows-on-Atlantis backdrop during the monologue, replacing them with a standard-issue heavy blue curtain — but I hope the Armisen check-in remains the first bit of business undertaken once Meyers is seated. It’s a welcome injection of wobbly absurdism into a show that is often as clean as the lines on that immaculate, modernist desk. Thus far, their discussions have ranged from Armisen’s new clothing line (based on whatever your friends are wearing) and the personal circus he founded “out west” that mostly involves handing cans of spray paint to unattended children. The long-established relationship between the two of them allows them both to shine, Armisen always willing to tiptoe out onto the tightrope, Meyers always eager to supply a net.

All told, the Saturday Night Live connection has proved to be a gift and curse for Late Night. Meyers is never better than when he’s setting up softballs for a colleague to spike, and the show’s comedy bits, particularly a phenomenal appearance by former 30 Rock punching bag (and now Late Night writer) John Lutz as a spendthrift travel guide, have uniformly killed. The rich camaraderie between Meyers, Armisen, and first-night guest Amy Poehler was only a plus. (Set your DVRs now for Bill Hader’s first appearance.) But at times, Late Night has struggled with the projection of itself as its own show, distinct from the weekly shenanigans happening elsewhere in the building. The mash-up of talk show orthodoxy (monologue, short interview segments) and “Weekend Update”–ish deadpan hasn’t always worked. And the constant references to the show he left behind, including gushing tributes to his replacements, Colin Jost and Cecily Strong, only serve to deaden the room. Niceness can work after 11:30 — just check out Fallon — but Meyers isn’t just nice, he’s polite. The result is a Late Night more buttoned-up than audiences may be accustomed to.

As Late Night continues to adapt and develop, I hope it will consider choosing sides. Is it an SNL-like showcase for writer-driven strangeness and character bits? Or is it a chat show? As much as I enjoy the former, I can’t help but root for the latter. Meyers is an extremely smooth interviewer, able to lean into moments to make them pop. (Patrick Stewart and Ian McKellen taking over the show was a paticular highlight.) In a relatively short amount of time, he’s already made Kanye smile and the notoriously frosty Naomi Campbell kvell. It turns out that SNL might be a better breeding ground for talk show hosts than we realized — not because of the practice in front of an audience, but due to the delicate balance of flattery and encouragement necessary to make very famous people do things they’d very much rather not do.

And yet that’s a skill Jimmy Fallon is already running with — in a three-legged race with Cameron Diaz. Now that both of NBC’s shows are in the same city, a good deal of guest overlap is inevitable. So Meyers should use his time with Ralph Fiennes to paddle out into deeper waters than the Wes Anderson stannery pepetrated a night earlier by Fallon. There’s a middle ground to be claimed between the politcal wonkery of a Jon Stewart, the ideas-driven chattiness of a Craig Ferguson, and the playful silliness of a Fallon. Meyers has already proved able to attract a sitting vice-president onto his show. But what’s even more noteworthy is that, had he taken the opportunity, he could have talked credibly to Joe Biden about more than airports and Parks and Recreation.

I’d love to see Meyers use the great Dick Cavett as inspiration — with his active mind and dry wit, he’s already halfway there — and bring on not people who are just in the news but those who are busy making it. It’s early still for Late Night, and the show is already enjoyably precocious. But Seth Meyers has the chance to become the rare talk show host capable of having a conversation. He’s far too sharp a guy to waste his time softening things up.