The Emmys Can’t Even Get the Narrative Right 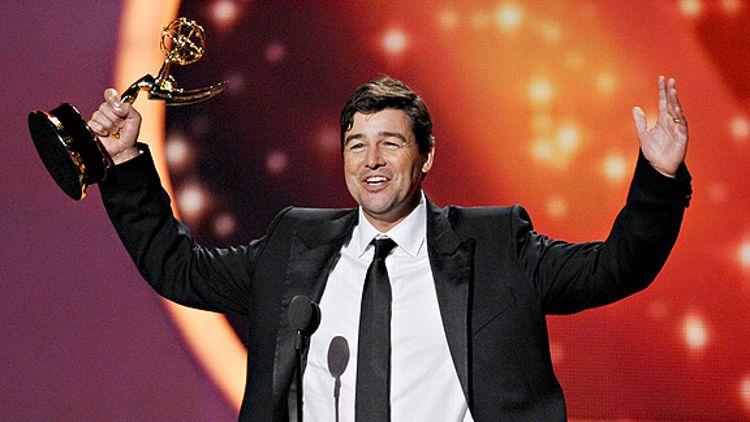 You know an awards show is in trouble when Rob Lowe appears and you find yourself wishing he brought Snow White with him. Last night’s 63rd Primetime Emmy Awards were, by turns, mawkish, desperate, cringe-inducing, and dull — and that was before the gang from Entourage heroically reunited after an absence of only one week. It’s hard to pinpoint the exact moment things tipped into catastrophe during Fox’s broadcast. Was it the decision to emulate the worst of the Oscars via cheesy, context-free montages reminding us just what, exactly, comedy is? (Note to producers: It’s not Nurse Jackie.) Or was it the subdivision of the show by category, thus guaranteeing a final third devoted to America’s enduring love affair with miniseries about British class discomfort? Perhaps it was the audibly flop-sweating voice-over announcer whose job it was to drop joke bombs like “his favorite Marx brother is Richard” while winners approached the podium, thus treating the show’s only unscripted moments like the allies treated Dresden? Or maybe it was an “In Memorium” segment so classless and tone-deaf it managed to forever ruin both “In Memorium” segments and death? Or was it the sad, craven sight of random television B+-listers shackled together in sock-hop burlesque and forced to perform a cappella intros as the Emmytones? You know what? Yep. It was that.

But lest we get too heavy — or LL Cool J shows up and starts yelling at us about telemovies — let’s talk about the good news. And, yes, there was some good that emerged last night — the show’s inability to stick with a single narrative (you can’t be jaw-droppingly awful and give a trophy to Peter Dinklage) was perhaps the most frustrating takeaway of the entire affair. As Modern Family relentlessly group-hugged the first half-hour of the broadcast into submission — enlivened only by the murderous death-eyes flashed by Julie Bowen’s husband when she thanked Ty Burrell before him — Amy Poehler hopped out of her seat like a bleached-blonde electric eel to transform the Lead Actress in a Comedy Series award into a fun, girl-on-girl tiara party. (That Melissa McCarthy won for her role in Bridesmaids more for her work on the clumsy Mike & Molly was barely objectionable.)

Then, in a fourth-quarter miracle comeback that would’ve been laughed out of Dillon let alone Burbank, Friday Night Lights won the Emmy for best writing in a dramatic series, a category it was widely expected to lose to Mad Men’s “The Suitcase,” considered by many, including its author, to be one of the best hours of dramatic television ever written. This wasn’t the Panthers’ overcoming the Campbell Park Timberwolves in overtime — this was a one-score victory over the ’93 Dallas Cowboys at the final gun. What followed was even more unexpected: Kyle Chandler somehow won the Bryan Cranston Memorial Award for best actor in a dramatic series — thus denying Jon Hamm his best opportunity to add a golden trophy to his otherwise paltry résumé of talent, otherworldly looks, and unimpeachable success. Coach’s triumph was everyone’s — his shocked, happy, definitely-slightly-buzzed face mirrored in every living room in the country, or at least in those that don’t watch House. Chandler’s lack of preparation was funny, especially considering his perfect five-year performance as the most unflappable man in the world. But after testing the limits (and benefits) of being a scrappy outsider for so long, it was heartwarming to see Friday Night Lights accepted into the mainstream where it always belonged, even posthumously. And if Chandler can be criticized for forgetting to credit his brilliant on-screen wife, Connie Britton, at least he managed to thank Julie Bowen’s husband.

Much of the rest of the night was lost in a blur of British people saying “grandiloquent” and Jane Lynch’s gamely treading water in corporate quicksand. Jon Stewart won again, and even let a woman onstage with him this time. The delightful Margo Martindale was named Best Supporting Actress in a drama but demonstrated a tenuous grasp on the concept of “spoiler alert.” Jim Parsons collected yet more hardware, a trophy he definitely deserved more than Steve Carell (in his last year of eligibility), Alec Baldwin, and the unnominated Nick Offerman. And if you believe that sentence, Charlie Sheen has an apology he’d like to sell you. (Honestly, is there a voting body more schizophrenic than the television Academy? We’ve never met a single person who watches both Justified and The Big Bang Theory. Actually, as a coastal elite, we’ve never met a single person who watches The Big Bang Theory full stop.) Kate Winslet and Martin Scorsese won because, duh, movies. And just when we thought the Mad Men snub was complete — that last night was the industry’s opportunity to scream “That’s what the money is for!” to Matthew Weiner now that his $30 million payday has led to fiscal austerity on the soundstage of every AMC show not set on Madison Avenue (expect to see a lot less raining and a lot more misting on the second season of The Killing) — the show managed to win its fourth consecutive statue for Best Dramatic Series.

Still, Mad Men’s triumph was well deserved, and Weiner even managed to keep himself mostly in check on the podium (save for a small exhalation of surprise, the result of spending the previous three hours staring undermining hate-daggers into the back of Michelle King’s head). And so, the song of the 2011 Emmys ended up being a familiar one, a tune even the abhorrent Emmytones couldn’t botch too badly. (“No, seriously, Taraji, it’ll be great! I know you’re a 41-year-old former Oscar nominee, but it’s really the best bet for your long-term career to have you sing backup to the guy who played Fez on That ‘70s Show.” — The agent Taraji P. Henson fired this morning.) Modern Family and Mad Men reign over television and — once Bubba Smith and Barbara Billingsley stop spinning in their graves — all will be well in Jane Lynch’s television tenement building.

At least until The Playboy Club premieres tonight, of course.