The Check-In: Hulu’s The Wrong Mans Is the Best New Comedy of the Fall 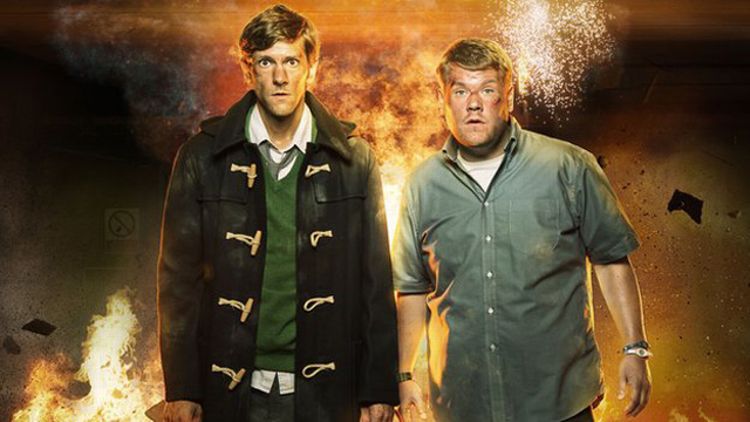 The possibilities are exciting, but isn’t there also something to be said for limits? The rise of the so-called “cable model” — 12 episodes per season, with all episodes guaranteed to air — has allowed for enormous creative freedom as well as a modicum of storytelling certainty: A season of television is now able to take audiences from point A to point Z without the fear of being canceled sometime around point F. The British, however, still do us one better. On the other side of the Atlantic, TV series are only as long as they need to be, and not a second longer. Downton Abbey, an enormous hit, makes just nine hours per year. Black Mirror — which had its domestic debut this week on DirecTV — makes only three. In most cases, this eliminates the stalling and padding that have come to define American TV’s obesity problem. (Does anyone really need 22 hours of Revolution?) But what’s truly exhilarating and, perhaps, a bit unfair about this arrangement is the way it frees creators from the constant nods, shuffles, and winks to the future that exist even in the most elegant of American series. British TV — at least the breed of it deemed worthy of export — lives in the moment. All good ideas are on the screen. No bets are hedged. No cans are kicked.

The Wrong Mans, which debuted on BBC2 in September and is now airing on Hulu, is limited in all of the best ways. It consists of only six episodes, each roughly 29 minutes in length. The tone is consistent, the scope is clear, the stakes are big but the landing is pillow-soft. It’s an outrageously stylish comedy of errors in which two small-town nobodies — played by series creators Mathew Baynton (as Sam, the quasi-competent ectomorph) and James Corden (as Phil, the excitable doof) — become embroiled in an increasingly intricate web of kidnapping, violence, and deceit. In the pilot, Sam — after a long night spent emptying bottles and drunk-dialing an ex who also happens to be his boss — witnesses a dramatic car crash. After the smoke is cleared, a cell phone remains. It rings. The voice on the other end demands money and a meeting or someone’s wife will be killed. Sam is horrified. Phil — who lives with his mom, talks like a gangsta, and rolls his own sushi — is exhilarated. Soon, against all better judgment — and against all audience expectation; shows that feature Belle & Sebastian songs in the first act rarely have coke-snorting, chest-licking, pistol-packing Russian gangsters in the third — the two are in it up to their necks and over their heads. Sam gets blood on his wool Paddington jacket. Phil gets body-slammed by a Chinese hostage. Limbs are threatened. Lives are lost. A Jamie Oliver lasagna recipe is irreparably tweaked.

In lesser hands — or after being pawed over by literal-minded, profit-hungry development execs — this sort of cross-genre mash-up would never work. But The Wrong Mans has such a steady focus and particular point of view that it succeeds wildly on two fronts: It’s both my favorite new comedy of the fall and the best action-thriller I’ve seen in ages. (I really mean this: Baynton and Corden are clearly indulging in kicky espionage and crime clichés out of love unlike the producers of, say, The Blacklist, who seem unduly burdened by them.) The genre extremes in both directions don’t pull the show apart, they tie it together in gripping, hilarious ways; episodes loop merrily from silly to romantic, from goofy to grim. It’s a tricky balancing act and one that echoes the work done by another differently sized British duo, Simon Pegg and Nick Frost, in their Cornetto Trilogy. Baynton and Corden have a similarly effortless rapport as well as the same knack for respecting the extremity of their characters’ situation even while they celebrate the absurdity: An accidental near-amputation is stopped not by a gun but by a stirring speech about national pride; a game of “guess the movie from a single line of dialogue” (Phil’s suggestion: “Welcome to Jurassic Park”) is interrupted by the sound of a spy smashing into the roof of a car.

It certainly helps matters that the cast is jammed with a solid mix of journeyman talent (Dawn French, Emilia Fox) and winking cameos (Dougray Scott, Homeland’s David Harewood) and that the director, Jim Field Smith, approaches his job with a winning blend of artful precision and childlike glee, jamming the camera in unexpected places and dousing it in cheap champagne. But I think the real credit goes to the format itself. With six episodes to play with and no future to fear, Baynton and Corden were free to take chances in ways their American peers can only dream of. No one outstays his welcome, nothing sticks around long enough to get stale.

The first question in nearly every domestic pitch meeting is “What does the second season look like?” The second question is “How about Season 5?” (The ninth question is usually “Did Amanda validate your parking?”) Though another go-round is possible — Corden has hinted they might have an idea and Southeast England seems to have a limitless inventory of double-crossing, intrigue, and violence from which to draw — The Wrong Mans succeeds because it doesn’t spend a single moment worrying about its survival. The trick to any successful high-wire act — apart from good balance and sparkly tights — is to know your limits and not waste time getting to the other side.