Smash: Blowing Up Our Skirts, But Not Quite Blowing Our Minds 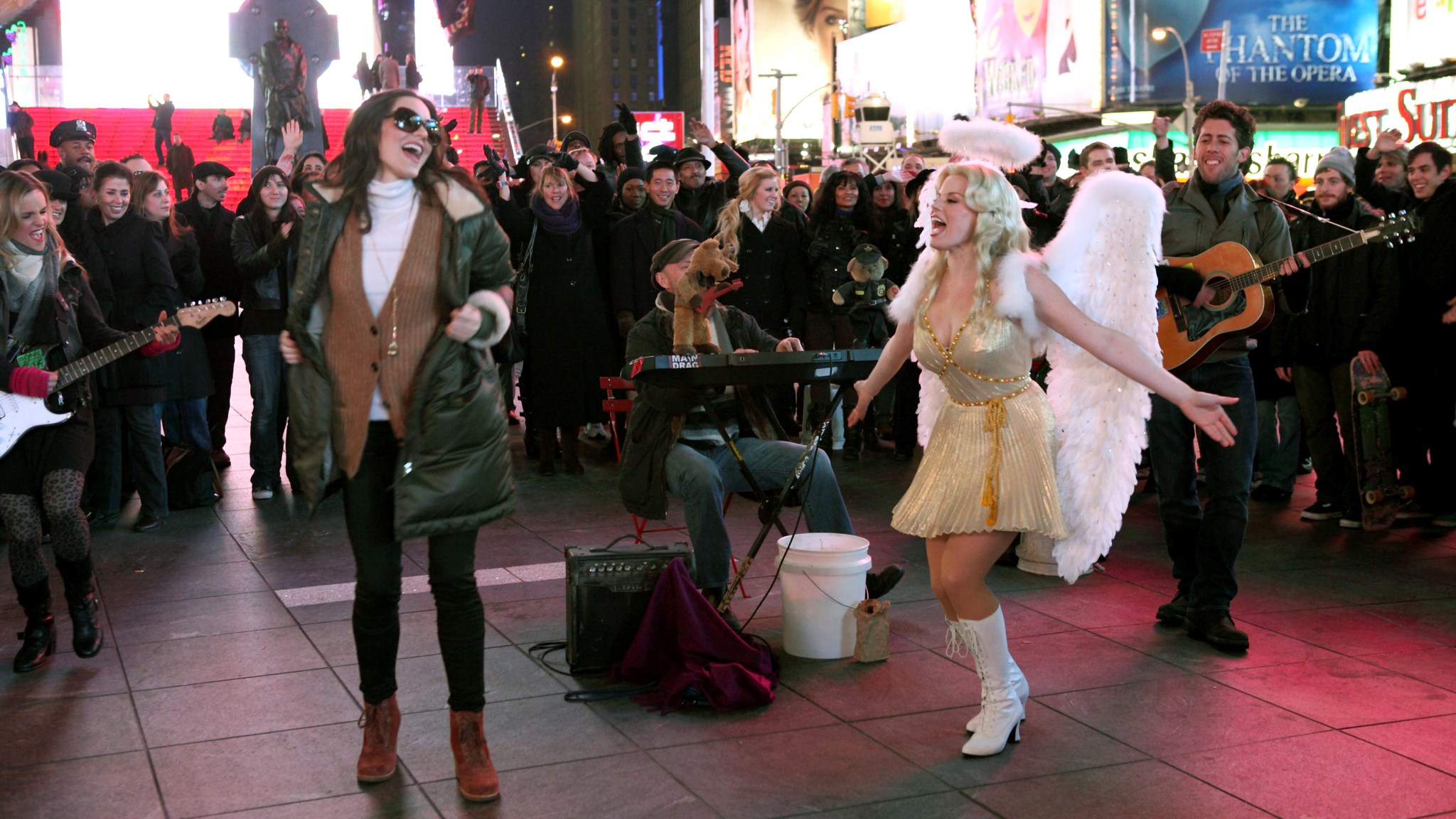 There’s Broadway and then there’s BROADWAY. The former is a long, twisty, occasionally tacky boulevard that winds its way down the length of Manhattan. You can buy bolts of fabric or elbow tourists in front of chain stores there, but mainly, if you’re a New Yorker, you try and avoid it. The other Broadway is a mostly fictional construct, where the lights are always brighter, stakes are always bigger, and hands are always jazzier. It’s the latter that NBC’s new Hail Mary (Martin) concerns itself with. All scrubbed marquees and faces, the heavily hyped series is the perfect companion to the Great Whitewashed Way, an innocuous bus parking lot where tourists can enjoy musicals based on movies based on books based on movies and shop for gourmet M&M’s unmolested.

But the problem with Smash, at least in its early episodes, isn’t its devotion to this brassy unreality. To the contrary, the best bits of the series — which was concocted by Steven Spielberg and heavily invested in by new NBC boss Bob Greenblatt — are wonderfully devoid of irony. It’s an irresistible, let’s-put-on-a-show spirit that elevates the hour above the unmemorable show tunes (written by actual nü-Broadway types Marc Shaiman and Scott Wittman), the head-scratching pace (YouTube leaks or no, most musicals take shape in dinosaur years, not between commercial breaks), and Debra Messing’s outrageous cardigan budget. Megan Hilty’s voice is an un-CGI’d special effect, her undisguised adoration of performance capable of sending chills up even couch-bound spines. Her rendition of the clunky “baseball number” “The National Pastime” transforms even the most jaded viewer into temporarily slackjawed Randys and Paulas (or, this case, Anjelica Hustons). In the actual theater (as opposed to the TV version of it) it’s this infectious investment that suspends disbelief in audiences, whether they’re from Kansas or Canarsie, and what keeps our jaded modern minds from dwelling on logical quibbles like where the New York Yankees learned to sing and dance or how, exactly, a librettist could afford a Brooklyn brownstone like that in 2012. Smash employs a similarly relentless battering ram of enthusiasm, as if anyone on screen dared to stop nodding or reacting or dreaming for even a second the entire enterprise would collapse into Cop Rock.

The trouble with Smash isn’t the razzle-dazzle, then, it’s the nuts and bolts. Even with the intense fiction that musical theater demands, there’s still room for friction. But Smash’s commitment to sparkle motion extends beyond the audition room. The show is built around former American Idol Katharine McPhee, a charmingly blank slate whose character is the sort of doe-eyed ingenue that make up 90 percent of the population of flyover places like Iowa, at least as far as show-business types in L.A. and Manhattan are concerned. McPhee’s Karen Cartwright is gorgeous and hungry — she even takes a few naughty licks of her inexplicably English boyfriend’s sundae — but there’s precious little else percolating under her sunny surface. “Sometimes dreams are hard,” she harumphs, cutely, just before wildly exceeding her own. Look, it’s never a good sign when other characters need to constantly assure the audience of a protagonist’s talents. Neither the extracurricular lusting of Jack Davenport’s posh British director nor the breathless nodding of Messing and her assistant-having songwriting partner Christian Borle can convince us that McPhee deserves the starring role of Marilyn Monroe over the more naturally gifted stage vet Hilty, an actress who looks as if she was born above a drafty subway grate.

Despite the talent behind the camera, including Tony-winning director Michael Mayer and Friday Night Lights staffer Rolin Jones, Smash makes the hard things (songwriting, avoiding sexual harassment) easy and the uninteresting things (Messing’s attempt to adopt a Chinese baby) needlessly hard. And no matter what complicit industry gossips might say, an old-fashioned original musical about a long-dead starlet is exactly the sort of backward nothing that would never fly on 21st-century Broadway — too much dancing, too little name recognition, and such a bummer of an ending! The only thing that succeeds these days, short of revivals and cursing, is actual flying.

But, look, like Hilty’s savvy Ivy Lynn, I’m not complaining when I point out Smash’s failings. I’m just dreaming. It’s a uniquely New York tautology, this conflation of ego-driven kvetching and angelic aspiration, and it’s fun to see it in a show so calibrated for the heartland. Still, just because the real Times Square has become a theme park doesn’t mean Smash ought to play to the rubes.

On the Plus Side for New England: No Rapping Patriots Fans Have Released Victory Songs This Week

The Hollywood Prospectus Podcast: Greenwald and Ryan on TV