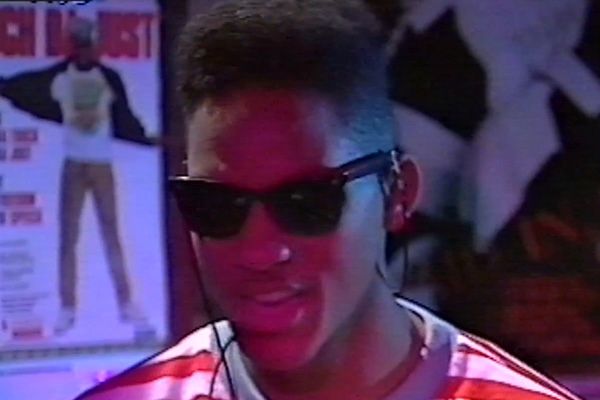 Welcome back to our series Rembert Explains the ’80s. Every so often, we’ll e-mail 25-year-old Rembert Browne a video from the 1980s that he hasn’t seen. Rembert will write down his thoughts as he’s watching the video, then we’ll post those thoughts here. This week’s installment was spotted on a blog post on Missinfo.tv: Will Smith rapping on Tim Westwood’s N Sign Radio Night Network in 1989. If you have an idea for a future episode of Rembert Explains the ’80s, send snail mail to Rikers or e-mail us at hollywood@grantland.com.

0:08 I love Tim Westwood’s presumably real/maybe fake/probably exaggerated accent and you should, too.

0:12 Those are Run-DMC records on the wall, but they really just look like large plates.

Just the coolest man on earth.

0:45 His voice has aged, but it hasn’t changed. That’s great. Also, he’s really not taking these shades off, is he?

0:48 HE JUST CONVERTED DOLLARS TO POUNDS, OUT OF RESPECT TO ENGLAND AND WESTWOOD.

1:02 At this point, Westwood is simply a statue from Madame Tussauds.

He’s stuck. Can’t move from this position. I would blame this on Will’s charm, but maybe it’s just that Westwood is a robot and needs to be recharged.

1:11 The “canned fart spray” line broke Westwood out of his silence and thawed him from his deep-freeze. Congrats to Westwood for coming back to life.

1:16 So they sprayed the fart smell into the fan and watched all the people leave the party and they laughed and THAT’S HOW THEY BECAME FRIENDS.

1:24 “We were a crew ever since then.” And just like that, all of the cute stories I’ve heard about how people became lifelong friends just became obsolete. DON’T EVEN STEP TO ME IF FART SPRAY ISN’T INVOLVED.

Incredible. It’s half the coolest thing ever, half the way my great-aunt would say it. I love it.

None of my lyrics are extraneous
Rhymes are spontaneous.

I am the Fresh Prince and I am as brainy as
GALILEO
Wiser than Einstein
With the strength parallel to that of a land mine.
I change to my surroundings, like
A CHA-ME-LE-ON
Sometimes I’m serious

And in time you’ll see, my energy can’t be withheld,
If it’s a sin to be a winner, then I’m going to hell.
Setting the course for the tippy-tippy-top
And my goal is to be the undisputed king of hip-hop.
Not trying to say that I’m the best, I swear it
But as the saying goes, if the shoe fits, then wear it.
It’s not that I’m better than the rest, well, you see
It’s just that nobody is as good as me.
SO I’M HUMBLE
When I’m complimented each day.

2:12 WESTWOOD IS FROZEN AGAIN, THIS TIME BY THE DROPPED SCIENCE.

My lyrics are praised, just like the scripture
The grammar is correct and they’re as vivid as a picture
I’m not the Messiah, the truth I must tell
I can’t walk on water, but I can swim like hell
I was taught by the world’s greatest MC
A man who undisputedly rules the whole rap industry
I was taught to be all that I can be
I was taught by a hell of a guy.

2:45 Will killed that verse, by the way. No arguments there.

2:56 It’s good to know the “Will Smith Laugh” is something that’s been with him forever. Like the “Eddie Murphy Laugh” and the “Denzel Washington Laugh,” I could pick it out of a lineup with my eyes and ears closed. It’s that distinguishable.

3:04 Oh yes, multiple takes of the verse again. This time he took his glasses off a little less cool. Glad that didn’t make the final cut.

Off-screen: “Gonna stop you, Prince, we’re having a problem downstairs. You were smashing.”

I’ve never been called “smashing,” but I’m sure I would blush and goofily smile just like young Willard.

3:23 Oh, so the best, most Will Smith conversation ever:

Will: “Tell me I didn’t mess up on this camera. Tell me, please, can we do this again? The last segment.” The nerves visibly running through his body are amazing, especially considering now he’s worth 100,000,000,000 racks.

3:57 WESTWOOD just made Will thank the dude upstairs, the guy who’s allowing Will to do another take. Will thanks him.

3:59 WESTWOOD to upstairs guy, about Will: “You’ve actually saved his career.”