Q&A: The Watch’s Richard Ayoade on American Blockbusters, British Comedy, and Getting Screamed at by R. Lee Ermey 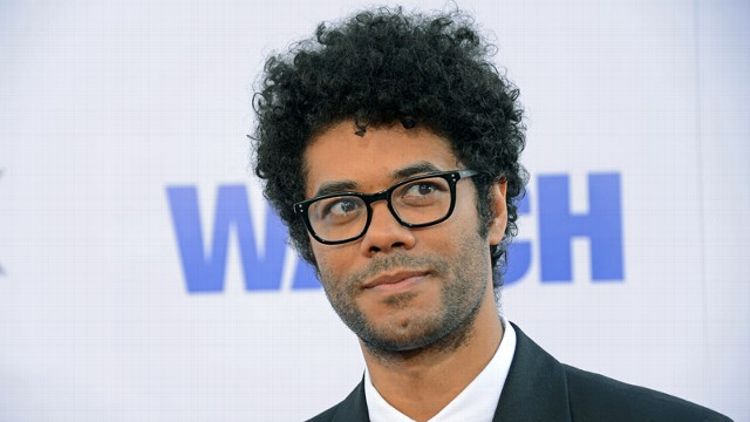 If, like me, you’ve ruminated deeply on The Watch billboards dotting L.A.’s landscape, you’ve come to appreciate the subtler manifestations of irony in movie advertising. Yes, at first glance, there’s nothing special about The Watch’s outdoor marketing campaign. It’s the standard famous-floating-heads-against-a-white-background. Pretty much the default design for when the main hook of your neighborhood-watch-themed studio comedy has become problematic. Still, scanning the familiar names — Hill, Stiller, Vaughn — a smile spreads across my face as I imagine someone struggling to pronounce “Ayoade” and thinking, Who’s that nerdy guy with the kid from Moneyball, Greg Focker, and Fred Claus? (OK, maybe no one’s thinking that last one.)

Click here for all of our interviews with fascinating people from the worlds of sports and pop culture.
For those who aren’t Brit comedy connoisseurs or film festival/music video geeks, Richard Ayoade is the British writer-director-actor currently doing his best to inject the New Wave’s playfully hip sensibility back into our culture. Of course, he’s also a mainstream comedian, instantly recognizable to fans of cult hit Garth Marengi’s Darkplace and The IT Crowd, a great British sitcom that fell one order-to-series short of being the next great transatlantic import, à la The Office. So it’s not a total surprise to see him with Ben Stiller, Vince Vaughn, and Jonah Hill in an alien-invasion farce from the writers of Superbad. But the truth is Ayoade’s also an up-and-coming auteur. Not only has he spread his retro-chic indie wings directing memorable music videos for The Arctic Monkeys, Vampire Weekend, and The Yeah Yeah Yeahs, he also directed one of the great Community episodes, an inspired riff on Pulp Fiction and Louise Malle’s classic My Dinner With Andre. And, oh yeah, he adapted Joe Dunthorne’s Welsh coming-of-age novel Submarine into a delightful comedy that lit up the indie film-festival circuit so brightly Harvey Weinstein swooped in to unleash it on the American public.

This week, I caught The Watch and talked with Ayoade, whose wry, self-effacing interview about directing, the secrets of British comedy, and having R. Lee Ermey point a shotgun at him, is below.

Thanks so much for talking. I’m sure it’s the nth time by now and you’re bored/tired from repeating the same stories over and over.

Yeah, I don’t even have any stories that are worthy of repetition, so it’s just me trying to be boring in an individual way.

Well, you did a good job of it on The IT Crowd — seemed to work well there!

OK, first question: I’m sure as a director you’re a huge Kubrick fan. How great was it to have R. Lee Ermey yell at you in The Watch?

Oh, it was pretty great, yeah. I just asked him about Kubrick all day, so for me that was one of the most exciting things.

Yeah, but I can’t say any of them. The best thing was, [Ermey] is obviously so tough, and he’d say, “Stanley was just a pussycat,” and I’d think, Yeah, compared to you! But he’s terrific. The stories are nothing scandalous; I’d just feel rude to repeat them. It was just interesting to work with someone who’d worked with Kubrick.

Would you count him among your influences as a director?

Well, I think there are just people whom I really like. If you say they’re influences, you’re somehow saying you’re in their category, but you know he’s one of them. He’s one of the great masters. I also love Bergman, Fellini, Kurosawa, and all the people everyone likes, Truffaut and Godard, Eric Rohmer.

So, not a surprise to me because I’ve seen Submarine, but the French New Wave is big for you?

What I really liked about Submarine is how you captured that spirit of the fun, and the funny, from the New Wave. It seems to get lost on some people, but all those guys and their movies, Godard especially, are pretty funny.

Speaking of auteurship, how’s work on your next film, The Double?

I’m so kind of impressed and thrilled by Jesse [Eisenberg] and Mia [Wasikowska]. I knew they were terrific actors, but to see them actually do it was just a great thrill. If I haven’t really screwed up, they should be really terrific. In fact, they’re so good, I don’t think I can prevent them from being terrific.

So, you didn’t hold a stopwatch to Jesse Eisenberg and make him do 99 takes again? [I.e., like David Fincher did to him for The Social Network.]

Well, we did quite a lot of takes. But they’re so good you don’t want them to stop … It’s going great. We have three days left of filming and Jesse and Mia are just terrific. I kind of can’t believe I captured them in a moment of weakness where they agreed to be in it. I’m looking forward to starting editing.

Was it interesting, as a director, to act in a big studio comedy like The Watch? This was your first real experience like that, right?

Yeah. In a way it’s sort of similar — there are just more resources. They have a bit more time. But ultimately, with those actors, you can’t keep them forever because they’ve got such busy schedules. So, they didn’t have that much more time. It’s just they have a Steadicam guy there all the time, that kind of thing. It’s interesting to see, and I thought Akiva [Schaffer] did really well marshaling such a big project.

But did you look at the Steadicam guy and think, What I could do with him!

Well, I’ve never had Steadicams while filming, not even for a day! It’s a completely different world, but it’s sort of justified because those people are really popular, so it’s not just indulgence. There’s a scale to films with those people that seems right for that, which wouldn’t be right for something I’d do.

You don’t have ambitions to make a big $100 million studio movie? Like, I don’t know, Ghostbusters 3 or something?

No, I’m very happy doing the things I’m doing at the moment. I wouldn’t specifically or arbitrarily do something that has a bigger budget, and I feel lucky to get to make anything. I’d only want to make something that I’d feel confident everyone who’d given me their money would get it back, which so far they have. I’m so happy that Submarine made money, and I don’t have to look at them and say sorry.

I see your point. $100 million is a lot to have hanging over your head.

Exactly. I’m not very good at being in debt. I find it hard.

Was it hard coming in, as the Brit comedian? The Watch pretty much represents with the heart of the American studio lineup: Jonah Hill, Ben Stiller, Vince Vaughn — who’s basically a Gatling gun of bromantic witticisms.

Because I was playing a British character, I didn’t have to hide my non-Americanness. My role was to be an outsider, not quite being able to keep up, and that was fine. In some ways, it’s much easier if you’re in something and everyone in it is really good. What’s difficult is if you’re in something and everyone isn’t very good, because I’m certainly not able to carry it on my own. [Here] it’s actually really easy. You just go, “This scene will be fine, it’s got Ben Stiller and Vince Vaughn and I can just look at the ground and get through it.” Some of my best work’s done looking at the ground.

You’re very funny when you look at the ground.

Well, yes, within the repertoire of ground-based humor.

It seems like such a large proportion of great comedians come out of Britain, and it’s such a small island. What is it? The climate, the beer?

I don’t know. It’s quite densely populated as an island. There have always been good comedians from England, but I suppose outside of the context of writing about things, you don’t think about it, really. Just like people in England don’t go, “Will Ferrell’s really funny, he’s an American.” Or Dame Edna. They think Barry Humphries is really funny; they don’t care whether he’s Australian or not.

True, but to me at least, there’s something about British comedy — it feels so rich and wry. Kind of like how British accents usually feel classy to us. And you think of all the sitcoms that get readapted, like The Office. I’m basically asking, what’s the secret to British comedy? I’m assuming you have it.

Oh, 300 million? OK, wow. So, you have five times the population. So if every fifth person people find funny is British, that’s a fine ratio.

I feel it might be more than every fifth person. And then there’s the quality.

Well, yes, Monty Python is sort of like The Beatles, really, aren’t they? They kind of did everything that can be done in comedy and they just did it in three years, and that was it.

Exactly, like they found the Euclidean axioms of comedy and all everyone else can do is expand on them.

Yeah, I mean, no one can really beat Python ever — that’s it.

Speaking of, I know you came from Cambridge’s Footlights theater group — which birthed the Pythons, among many others. What’s it like following in those shoes?

What’s strange is you’re aware that you’re in a very privileged position because you’re able to put on shows based on the fact that these geniuses were in that club at some stage. And every so often there are further geniuses like Stephen Fry and Hugh Laurie. But the main thing you feel is a kind of shame you aren’t one of those, and an embarrassment and hubris that you even dare to draw breath. Also, speaking personally, I was just the pits at that stage and had no idea what I was doing and produced unpardonably shoddy stuff.

I was terrible. Also, for us at the time — I did stuff with John Oliver, who’s always very funny — but essentially everyone just wanted to be Chris Morris, and I can’t say at 19 that made for a pretty sight. It’s essentially what it was like in every guitar shop after Nirvana came out. Everyone was just awful; it was terrible.

You seem to have picked up something along the way —

Probably Garth Marenghi. That was the first time we sort of tried to apply some thought to it.

John Lopez is a writer/filmmaker living in Los Angeles. He’s a regular contributor to Vanity Fair‘s Hollywood blog, and has written for the Los Angeles Times, Businessweek, Departures, and Esquire.com.

Peggy Olson Will Be Back on Mad Men; Calm the Hell Down