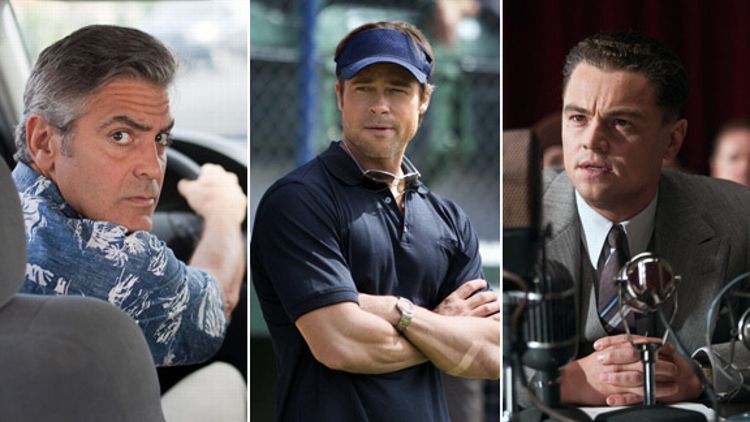 There are many ways of looking at a Best Actor Oscar race. You can ask yourself who gave the year’s strongest performances. You can think about who’s overdue, who’s surprising, who works the circuit effectively, who exceeds expectations, who elevates his movie the most by his presence in it. But ultimately, the question that decides the nominations is always this one: Who do actors want to vote for?

This year, that may be tough to answer, since Best Actor is shaping up to be an extremely unusual race. In Column A, we have three Goliaths: George Clooney for The Descendants, Leonardo DiCaprio for J. Edgar, and Brad Pitt for Moneyball. And in Column B, we have a whole bunch of Davids. The problem for the Davids is that they’re not Goliaths. The problem for the Goliaths is that voting for Davids is usually a lot more fun.

Clooney. Pitt. DiCaprio. If I were an ABC executive hoping to amp the Oscars telecast’s ratings, I would consider this to be three-fifths of a perfect nominee roster and pray that the votership chooses to fill it out with Taylor Lautner and Adam Sandler for their fine, fine work this year in Abduction and Jack and Jill. (Tragically, since both Lautner and Sandler appeared in more than one movie in 2011, their votes will probably be split, destroying their chances.) Still, consider that lineup: Three of the biggest, most successful, most photogenic stars in Hollywood giving three creditable performances in three campaignable films.

And, because Oscar campaigns are always based in part on the terrified certainty that the performance in itself cannot possibly be enough, all three men also come equipped with prepackaged narratives. DiCaprio’s, unveiled in a New York Times “Arts & Leisure” cover story simply headlined “Risk Taker,” is just that: I’m a hard worker who challenges myself with transformative roles for serious directors, and you’re never going to see me sell myself out for Pirates of the Caribbean 5: Shitload of Doubloons. Clooney’s narrative goes something like: I use my star power to get small and worthy movies greenlit, the clear implication being that the difference between The Descendants with Clooney and The Descendants with someone else is the difference between a movie you get to see and a movie you don’t. And Pitt’s, tailored to the tortuous history of Moneyball, is: I stick with projects I believe in for years until they get made.

All three of these premises have enough truth in them to be legitimately deployed. But there’s a problem: They all fall into an awards-narrative category that Movieline’s Oscar guy, Stu Van Airsdale, astutely identified a couple of weeks ago as “It’s a nice story. It’s just not … charming.”

Academy voters like to be seduced by a narrative, not simply persuaded by it, and a Clooney vs. Pitt vs. DiCaprio contest has a slight whiff of “Which of the three richest, handsomest, most popular boys in the school are we going to choose as class president?” They are, in short, the 1 percent — and this is not an ideal year to be in that category. At another Oscar moment, the now-widely-reprinted news that DiCaprio took only one-tenth of his usual fee to make J. Edgar might get him some traction. This year, people are more likely to note that one-tenth of his usual fee is $2 million, which means that the notion of personal sacrifice should probably be left out of the argument.

I’m not suggesting that all of these guys don’t have good chances at nominations. In fact, one of them might win. But what’s missing here is, perhaps, the sense of urgency, importance, or sheer pleasure that impels voters to carry an actor all the way to the finish line. Clooney has been nominated for five Oscars already (three of them for acting) and has won once. DiCaprio is going for his fourth nomination, and Pitt for his third. None of them fits comfortably into the “It’s Time” narrative; they did good work this year, but nobody is going to be able to make an effective case that they’re owed. Beyond that, I wonder if voters in the actors’ branch may feel that there is something slightly dull, expected, or rote about writing down all three of those names.

Especially when you consider the alternative — a long list of the kind of performers who make it too easy to shorthand this contest (unfairly) as Actors vs. Movie Stars. The problem for the three gentlemen in Column A is that Column B is not only talent-rich but replete with enough viable and even pleasurable Oscar narratives to render Column A unnecessary. Here’s what a movie-starless Best Actor category could look like this year:

1. Jean Dujardin for The Artist.

The people who like this movie love this movie, and Dujardin — a newcomer, a foreigner, an actor who pulls off the stunt of a silent performance in a movie about movies — comes not only with the backing of Harvey Weinstein but with a narrative that is the definition of charming; everybody always adores the year’s nobody who becomes a somebody. Casting your vote for a French guy you’d never heard of 12 months ago just because you love him in a movie feels like a vote on merit — even if a canny campaign is behind it. And voters love saying, “Who’s that guy?”; it makes them feel discerning.

I suspect people are going to be sharply divided on the merits of a movie about how getting all the sex you want whenever you want it can make you feel hollow and lonely, but they’re likely to be pretty unified in praise of the commitment and intensity of its star. The German-born Fassbender has blazed into Hollywood’s consciousness in the past three years in arthouse films and comic-book blockbusters, contemporary dramas and period pieces, leads and supporting roles. An acknowledgment for Shame would essentially be a you’ve-arrived nomination (and thus part of a long tradition) — and also an announcement that voters are open-minded enough to look past an NC-17 rating if the performance demands it.

Harrelson has been nominated twice already, and if the independently made dirty-cop drama Rampart seems too off-the-radar for the Academy, remember that his most recent nomination came at the hands of Rampart director Oren Moverman for the indie The Messenger; the acting branch is more than willing to throw its weight behind a big performance in a small movie, and Harrelson’s, poised somewhere between the character-study intensity of Harvey Keitel in Bad Lieutenant (a non-nominee) and the bravura flamboyance of Denzel Washington in Training Day (a winner), feels well positioned for recognition.

There is no ancient, teetery lion in winter contending for a Best Actor nomination this year, so while it might seem strange to position Oldman as the éminence grise of the race, if there’s anyone in the field who can benefit from “It’s Time,” he’s the one. It has been 25 years and 47 movies since Oldman failed to get the first Oscar nomination he deserved, for Sid and Nancy. Now, at 53, he’s still waiting to be able to add the words “Oscar nominee” to his c.v., and his underplaying in a role made famous by Alec Guinness might do the trick. Here’s a case where “It’s Time” works, because it really is time.

I’ve already written about how much I love this performance, which combines Shannon’s gentle, laconic, sad-eyed grace with his ability to go hair-raisingly, skin-pricklingly big when the moment demands it (and boy, what a moment it is when it comes). My guess is that the more people see this movie, the more votes he gets. It’s that simple.

I’ve left out a number of talented and impressive contenders who fall lower on the Column B list in terms of their likelihood of receiving nominations: Joseph Gordon-Levitt for 50/50, Demian Bichir for A Better Life, Paul Giamatti for Win Win, Ryan Gosling for Drive, Tom Hardy for Warrior, Ralph Fiennes for Coriolanus. My point is, there’s a deep bench here, deep enough that I think Academy voters may rebel against the notion that Clooney, Pitt, and DiCaprio have somehow all drawn first-round byes. What if voters want to pick more than two from Column B? Who gets left out? DiCaprio, whose movie got the weakest reviews? Pitt, whose film is now winding down its run, always a danger in a contest in which out of sight can equal out of mind? Or Clooney, who “needs” it least of all?

It’s worth bearing in mind that most actors in the Academy don’t live in the very exclusive vicinity of Column A. Big-ticket, prime-of-their-career, top-dollar movie stars are a rare breed who are rewarded by life more often than they are rewarded by Oscars. In fact, I can find only one instance in the past 20 years when the actors’ branch decided to nominate three of them in a single year: 2001, when Russell Crowe, Denzel Washington, and Will Smith were all contenders. That year, however, came with its own separate and compelling narrative — an opportunity to make history by nominating two African-Americans for Best Actor in the same year. In 2011, no similar sense of occasion prevails for Clooney, DiCaprio, and Pitt. And while I wouldn’t count any of them out, I wouldn’t count all of them in.