On Last Night’s Shocking Episode of ‘The Good Wife’ 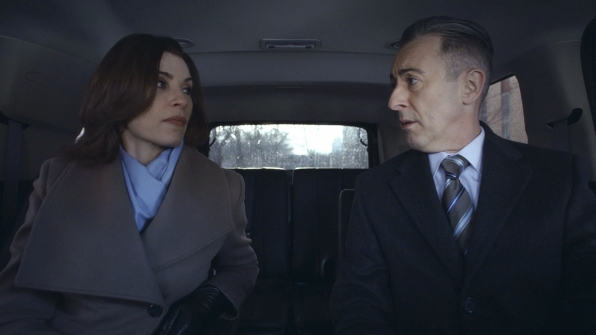 Editor’s note: There are definitely spoilers in here. Proceed at your own risk.

Every great TV drama with a man and a woman as its main characters comes, sooner or later, to hate its ’shippers. They invent cute merged names that feel like they’re covered in pink plushie fur, they daydream fan fiction, and they sigh “Just kiss!” episode after episode, season after season. Shipper-hatred is not why the producers of The Good Wife chose to kill off Josh Charles’s character Will Gardner in one of the most surprisingly brutal exits (and best-kept secrets) any network show has pulled off in years. But — forgive me for this — frustrating the desires of a segment of the viewership that insists on turning all drama into romance, all romance into suspense, and all suspense into cliché is a silver lining.

On one level, we might have seen this coming. The Good Wife has been, since the beginning of this season, robustly willing to blow up its own firm and its own form, and the death of a major character at the hands of his client — something that’s been in the works for a year — is another indicator that TGW wants to keep you on your toes rather than settle into being procedural comfort food. But on another level, Will’s exit is also a reminder that the question of which of two powerful men Alicia Florrick was going to end up with has long been inimical to the intelligent, tough-minded spirit of this series and to its main character’s transformation from pawn into player. (Has a show ever outgrown its title so quickly? Other than Cougar Town?) “Should the cute girl choose the vampire or the werewolf” is many things, but it’s not grown-up, it’s not dramatic, and, after 100 episodes, it’s not nearly as compelling as the notion that the adult woman in question might choose neither, and might even be more interested in other things.

Alicia’s search for her identity — how much she’s willing to define herself apart from the men in her life, how she seems to become more like Peter (and in some ways like Will) the less she depends on them, how she chooses to be “good,” and how slippery she lets her definition of that word become — is the engine that has long powered this excellent, chance-taking series. Now we’ll get to see how she deals with the loss of a friend, a lover, and a rival, as well as with overwhelming grief and knowledge of what Will thought he knew about her husband. We’ll also see Diane cope with going it alone, and a merger of the two firms down the road into one that has a wholly altered power structure seems well within the realm of dramatic possibility. Dramatic possibility is, by the way, the quality that is supposed to keep us watching, and one that TV dramas reach for too rarely. I’m sympathetic, I guess, to those who were so invested in “Willicia” that they feel they’ll no longer have a rooting interest in the series. But I don’t think we’ve been watching the same show.

'Bachelor Pad' to Be Reborn As 'Bachelor in Paradise' This Summer, Because We All Deserve to Be Happy Again