Which shoot-the-moon, over-the-top sequence in Mission: Impossible — Rogue Nation is the one that screams, I’m Tom Cruise, bitches? Could it be the one in which he knifes into a deep-water tank and swims against a high-pressure current with no scuba gear? Or is it the Opening Sequence Everybody’s Been Talking About, in which Cruise leaps onto the wing of an Airbus A400M military transport aircraft and affixes himself to a side door as it’s taking off? The latter has gotten a lot of attention because he’s holding on unharnessed and the wind alone looks as if it’s going to blow his face off. But that’s the thing about Cruise at this point: He’d make these movies even if all that was left of him was just a flaming skull.

Holding his breath for three minutes and grabbing an ascendant plane — not to mention the bike chases, drunk-ish driving, and the bit in Vienna in the rafters at a production of Puccini’s Turandot, in which he tussles with a big blond goon on shifting trusses — is all perfectly, ludicrously Cruise. This is what he and the makers of this delightful yet perversely self-delighted assortment of one-man theme park rides know you’ll pay to see. The Cruise-iest passage is one of those trick sequences in which a heavily armed squad descends upon the Havana location of its target only to bash down the door and find an empty room. Cruise’s secret agent, Ethan Hunt, is doing push-ups and pull-ups somewhere else. Amid the cuts to the power-squatting and the pushing and pulling, there’s a shot of a pile of cash. The punch line even includes a shot of an iconic phallic structure to cap the sense of arousal via physical and tactical triumph. Money, muscles, monuments: That’s so Tom.

It’s entirely possible to watch and enjoy this movie as one that just so happens to star Cruise. There’s wit and style, and the action sequences never hit the same note twice. The director and credited screenwriter is Christopher McQuarrie, whose previous movie, Jack Reacher, also starred Cruise and was the worst time I had at the theater in 2012. Rogue Nation is almost good enough to induce amnesia.

This time the government is dismantling Ethan’s Impossible Mission Force (the IMF) and handing over its work to the CIA, which Alan Hunley (Alec Baldwin) runs in a state of disgusted hauteur. Hunley is Jack Donaghy dunked in a cold vat of Tom Clancy. Apparently, Washington’s had it with IMF’s “wanton brinkmanship” and “disregard for protocol.” This has to make you laugh. You mean, not one of the senators laying into Hunley and IMF agent William Brandt (Jeremy Renner) is impressed enough by Hunt’s plane-barnacle routine to simply bow down?

Hunley is obsessed with bringing Ethan in. (That’s his duped squad in Havana.) Ethan is obsessed with bringing down a cluster of renegade spies called the Syndicate. And the movie is so consumed with getting its passport stamped whenever possible that it sets one chase sequence in two different cities. Ethan’s going rogue does have the happy side effect of getting tech wiz and analyst Benji (Simon Pegg) off desk duty and re-lassoing Luther, the ex-agent played by Ving Rhames, whose moled skin has never been creamier.

For newness and intrigue, the film introduces Rebecca Ferguson as a British agent so deep undercover within the Syndicate that she’s willing to take out a world leader — but not so deep under that she can resist saving Ethan’s bacon a couple of times, once very sexily underwater. I’d never seen Ferguson before, but her thorough mix of hard and soft is striking. For that opera sequence, she’s been put in a gorgeous yellow evening gown, the slits of which are convenient for throwing a leg on a ledge in order to steady a rifle. Ethan isn’t sure whether he can trust her. Neither is the head of the Syndicate, a chic, pulseless Brit that Sean Harris plays as someone who missed his calling at Hogwarts. We don’t know what to make of her, either. Then the movie winds up in Casablanca, you remember that the character’s name is Ilsa Faust, and, for the sake of overwrought allusions, your heart goes out to her. 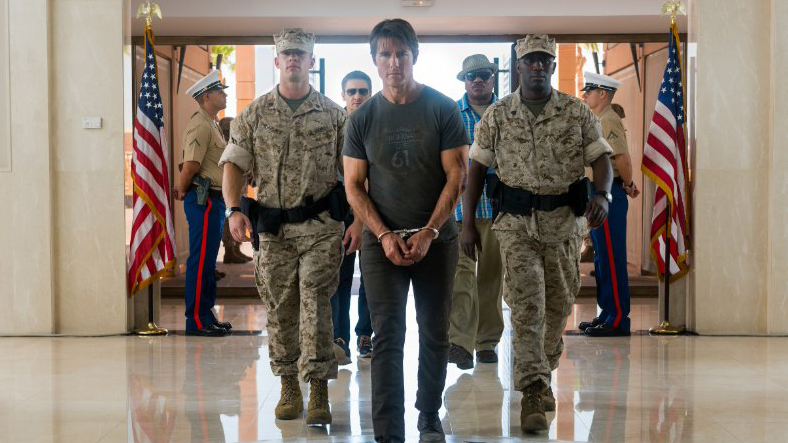 Rogue Nation is the fifth Mission: Impossible film since 1996. The series began as a remake of the 1960s television show, which, in part, is memorable for Lalo Schifrin’s frisky, lusted-up bossa nova score. The directors have changed for each. Brian De Palma, John Woo, and J.J. Abrams, respectively, did the first three, each of which was less fun and more belabored than its predecessor. The saving grace of the third was Philip Seymour Hoffman as the villain. That was the rare big, modern Hollywood contraption that managed to scare up a terrorist who actually terrified. Abrams also threw in a great, series-mandated mask riff between Hoffman and Cruise that doubled as commentary on the powers of each as a performer. Cruise has never seemed more overmatched in one of these movies, as both a protagonist and an actor. (Sean Harris seems Mrs. Doubtfire by comparison.)

The fourth — 2011’s Ghost Protocol — turned an act of franchise-saving desperation into a work of pop art. No one except for Cruise seemed to need this movie. But his need triggered ours. Brad Bird was precisely the right director to apply what had gone out of the series, which was finesse and visual wit. A relatively slender caper film doubled as slapstick for Cruise, as he repeatedly found ways of appearing to risk his life for a stunt. He was smartly surrounded by Renner, Paula Patton, and Pegg (who’s even better in the new movie). Those are actors who complement Cruise’s self-mocking seriousness with their harmonized versions of lightness. Cruise was as absurd there as he’s ever been. But seeing him rededicate his body and sense of humor to the ridiculous was sublime.

I left that movie under the assumption that Cruise had gotten Ethan Hunt out of his system. But I missed the point. Whether or not he — or the studios’ insurance company — knows it, Cruise is 53 now. In the last dozen or so years, he’s switched from offense to defense. He became a star by trying to prove he could do anything — holding his own against Paul Newman and Dustin Hoffman, winning beach volleyball, mixing a drink, playing a balding paraplegic leftist. Now he’s trying to stay a star on defense. There has to be an easier way, even if the hard one is the only one Cruise knows. His last movie, Edge of Tomorrow, sent me out on a high I’d never experienced before with him. It was the ultimate in Cruise — the entire movie was proof to himself and the audience that he couldn’t be obliterated. He could have moved to Saturn afterward and never looked back: I’m Tom Cruise, bitches!

Now I’m afraid that every new Tom Cruise outing feels like aggrandizement — of Cruise, of his masochistic-messianic addiction to ultra-ness. He’s launching himself through closed windows and shimmying — shirtless and handcuffed — up poles using only his core strength because it’s what we want. And I have to say: I do want it. Just not all the time. This is Cruise Week at Grantland, and in looking back, many of us have been inspired to look forward, to lament that the emotionalism has gone out of his acting. I’m inclined to wish for him to explore not his indestructibility and agelessness but his humanness. Recently, he agreed to do some lip-synching for Jimmy Fallon on The Tonight Show. “Can’t Feel My Face” by the Weeknd was his assignment, and what was exhilarating about it was watching who he became when forced to use a stranger’s voice. He seemed to leave his body — in mild panic at first, then with abandon — in order to inhabit someone else’s: Michael Jackson’s, Usher’s. He seemed free from whatever monumentality he feels motivated to fulfill on bigger screens.

There’s an excellent new documentary about Marlon Brando, in which Brando explains himself through old audiotapes. I watched it wondering about the one star who has led as strange and complex a private/public life: Tom Cruise. I don’t know what Brando means to Cruise, but it feels as if actors now heed only the cautionary portion of Brando’s life. Very few are willing, let alone able, to look inward to pull out something beautifully ugly. Brando might have inspired the opposite: full exteriority. Bran-don’t. Cruise has too much charisma to be merely mechanical as a star. He shows effort because the effort can be extraordinary. But it can also just be effort. Work.

At the movies, the last four years have indeed felt like the ultimate Cruise, in that there’s no one better, but also in that there’s nowhere else for this idea of him to go. I know: Cruise doesn’t hit walls. He smashes through them. But at some point you get tired of looking at the rubble. In Rogue Nation, it isn’t just that he’s sprinting again. It’s that Ferguson and Renner have to be shown running just behind him, in second. Meanwhile, Baldwin is here to simply add to his tally of preposterous but indelibly delivered movie monologues. The one here culminates in his saying of Hunt, to the British prime minister (Tom Hollander), “[he’s] the living manifestation of destiny.” We know who he’s really talking about, so Baldwin’s pseudo-religious summation brings down the house. It also makes you shake your head. This is where we are with Cruise now. He’ll give you 200 percent, but not without gluing an angel’s wings to every bead of sweat. This is a terrific action movie. But McQuarrie has also committed for Cruise the creepiest, least pleasant kind of self-acknowledgement: consecration camp.

This column has been updated to correct an error: Alec Baldwin’s line about Ethan Hunt being the “living manifestation of destiny” was said to the British prime minister, not to a government panel.