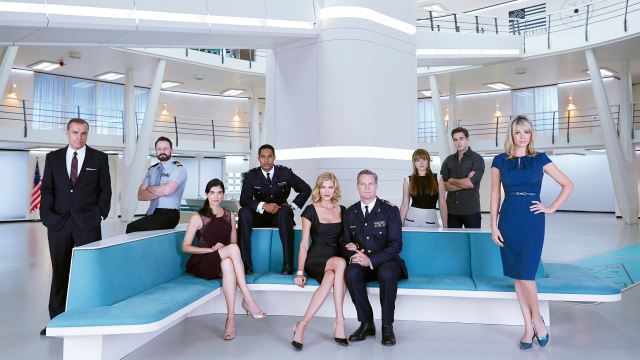 It was a hot, sticky day in 1962 when John F. Kennedy laid out America’s plans for interstellar travel. “The exploration of space will go ahead whether we join in it or not,” he said to those in attendance at Rice University in Houston. “No nation which expects to be the leader of other nations can expect to stay behind in the race for space.”

JFK would never get to see his vision fulfilled, nor would he see it subsequently mythologized in pop culture. In the last five decades, we’ve launched (and ended) the space shuttle program, sent astronauts and machines off to investigate new planets, and been subjected to Christopher Nolan’s bloated id. The typical reaction to exploring the unknown is an influx of bizarre myths and conspiracies.1 The latest space-related one comes via Syfy and its mildly entertaining new miniseries, Ascension.

Though fictional, the show’s backstory was born from a program dreamt up by the Kennedy administration. At the beginning of the Cold War, the president put contingency plans in place in case the Soviet Union and America destroyed our planet with nuclear weapons. He wanted to ensure that human life would survive if that happened. Enter a NASA-led nuclear propulsion venture called Project Orion. The plan: send a shuttle of people into space to build a new world. Ascension picks up 51 years into that theorized mission.

Like any great conspiracy-laden drama, this one starts with a murder. A beautiful young woman clad in white lingerie is found dead on the Ascension’s fake beachfront. The ship’s beautiful captain and beautiful medical examiner assume it’s an accident, but the beautiful executive officer suspects foul play, which he argues over with a beautiful … wait, why is everyone on this ship so good-looking?

Looks aside, the show soon delves into a Twin Peaks–like murder mystery, with the dead girl, Lorelei, subbing in for David Lynch’s Laura Palmer. It should come as no surprise to anyone who has watched more than three hours of television over the last 20 years that Lorelei had deep, dark secrets. Exhibit A: footage of Lorelei’s psychological profile. When asked what she thinks about the word ascension, she stares into the camera and says, “Trap.” What kind of trap? The ones who know aren’t talking.

Making matters worse: The Ascension has a Titanic-esque class system, so you know who the ship’s leaders will be pointing the finger at in Lorelei’s murder: some poor sap in steerage. People on the lower deck of the ship, where the engineering and food systems are, are considered trash, while those on the upper deck are considered wealthy and refined. Showrunner Philip Levens (of Smallville) highlights these differences by giving the guys below a greasy rag- and soot-filled environment. The folks up top, meanwhile, get to live like kings and queens, in a gorgeous Mad Men–esque world of martinis, vacuumed carpets, and perfectly coiffed hairdos.

Initial previews of this show even billed it as a Mad Men in space. It makes for great ad copy, but the series is a long way from Peggy Olson and her Burger Chef moon references. Mad Men utilized the Apollo 11 mission as a way to bring people together; Ascension uses space to drive them apart. Conspiracies are hatched between passengers, everyone is having an affair, teens who were born on the ship find themselves in a world with no options, faced with the depressing reality that they don’t have a say in how they will live their lives. In space, no one can hear you gripe.

Even the adults are depressed. Much of that stems from an accident early in the ship’s history, referred to as “the fire,” which left many dead and survivors scarred. The ones who aren’t sad are cynical. They know the ship is corrupt, and they are doing their best to exploit it.

Ascension itself is the latest in a long line of Syfy miniseries, most notably Battlestar Galactica, that began as three-hour events and were subsequently picked up as regular shows. Some of the same memorable plot devices of Galactica live on here, including nuclear destruction and human survival.

Ascension, however, is much more contained. The people on the ship are concerned with what’s going on inside their own environment, not what’s happening in the far reaches of the galaxy. That tends to happen when one of your own gets murdered on the ship. But in an era of space films that dare us to think more about our solar system, it feels like the show is lacking something.

Ascension does find a bit of saving grace in a last-minute twist at the end of the series’ first hour, but does that make it worth the journey? Seeing the weird mix of old and new tech is fun (the lounge is very ’60s, while the residence deck is bathed in futuristic fluorescent light), along with the program’s pop culture callouts, from Elton John to Fritz Lang. However, if you’re expecting Ascension to double as a sophisticated riff on our nation’s space program, or as an existential yarn on how humans react when put in extreme circumstances, don’t get your hopes up. The problems presented in the show’s first hour are fairly superficial, and — barring a drastic midseries turn — that’s unlikely to change.

You don’t have to dig deep to point out some of show’s head-scratching science. How has this ship been able to stay in orbit for five decades without contact from Earth? Why and how is there gravity on the ship if it was launched in the early ’60s? And, perhaps most importantly, why do the officers onboard not float when the outside doors to Ascension are opened for repairs? (For the love of god, no one show this program to Neil deGrasse Tyson.) Perhaps these questions get answered in subsequent episodes, but there are enough plot holes, space-related and otherwise, to drive a 600-person spaceship through.

Things are more interesting back in the real world anyway, where real strides are being made to explore our solar system, most notably an upcoming joint mission between the U.S. and Russia that will investigate the rigors of long-term space travel as a beginning step to send humans to Mars. Those invested in that and other space-related endeavors might find Ascension a bit restricted, far short of the aspirations Kennedy laid out in his Houston speech. Kennedy claimed “We set sail on this new sea because there is new knowledge to be gained.” Well, there’s nothing new to be gained from Ascension; JFK’s dreams in this show are located in another galaxy. To quote one of the characters: “Camelot is gone. The heroes are dead.”

We Went There: On the Ground at the Big, Sad, Strange Burt Reynolds Memorabilia Auction in Las Vegas

They Shall Be Released: D’Angelo’s ‘Black Messiah,’ ‘Selma,’ and ‘Exodus: Gods and Kings’