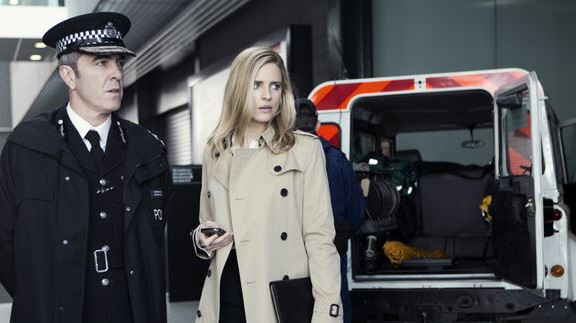 It’s hard to find much to laugh about in policing at the moment. Between the flare-ups in Ferguson and the slowdowns in New York, the thin blue line feels more fragile than ever. And TV, often our most nimble cultural mirror, has thus far remained opaque on the subject. Rather than engage with reality, small-screen cop stories have retreated to the extremes: the comic-book bombast of Gotham and Chicago P.D. or the genial bumbling of Brooklyn Nine-Nine. Larger conversations about disparities of power, justice, and representation have yet to sink into our fiction. Maybe this shouldn’t be a surprise. TV police looked a lot like Hawaii Five-O before the groundbreaking nuance of The Wire. They look a lot like Hawaii Five-0 after it, too.

So perhaps what’s needed is a little perspective. And that’s just what Babylon provides. The series, which premiered on SundanceTV last week, is a British production (it aired on Channel 4 in the U.K. late last year) and was filmed long before grand juries became part of our national conversation. And yet it arrives at what feels like precisely the right time. Set in the highest reaches of Scotland Yard, it’s a scabrous institutional satire that dives deep into the existential absurdities of modern urban policing. The beat cops and brass in Babylon’s London are tasked with more than just keeping the peace. It’s fallen to them to maintain the perpetual illusion of peace. This is a cop show in which branding is as important as bullets, in which a ravenous press is as alarming as a bomb threat. But optics go only so far. The longer Babylon runs — the first season is six episodes in total — the tone becomes more anguished than funny. You laugh until the sound of it rings hollow in your throat. By the end, Babylon leaves you breathless.

That’s a sensation often associated with director Danny Boyle, the boldest of the boldface names behind Babylon. And yet his involvement, to American eyes anyway, is almost nil. SundanceTV aired the table-setting, Boyle-directed pilot way back in September and is now continuing the series with what is essentially the second episode. (For our purposes, the actual second episode premiered last night. Future installments will air on Thursdays at 10 p.m. EST.) As far as I can tell, the story works just fine so far removed from the pilot. Still, the lack of Boyle’s trademark visual adrenaline means that Babylon’s early hours are more funny than ferocious. Cocreators Jesse Armstrong and Sam Bain did time on the cult comedy Peep Show, as well as The Thick of It, a Britcom that was to politics what a mortician’s scalpel is to a corpse. (Other descendants of The Thick of It include the film In the Loop and HBO’s brilliant Veep.) So, at the outset, Babylon appears to follow a similar surgical path, with great loop-de-loops of profane invective and ruthless doublespeak. (“If you hump the golden goose, you’re going to get golden egg on your dick,” one character says bluntly. “Smashed. It’s the same pipe.”) Like Veep, Babylon isn’t a parody of power so much as an exposé — revealing, in excruciating, often hilarious detail, the private bits of ego and incompetence that lurk behind an imposing public façade.

James Nesbitt, so strong as a grieving father in Starz’s The Missing, stars as Richard Miller, London’s ramrod-straight police commissioner. In his orbit and in his thrall are the usual assortment of simpering yes-men and women, serving up, as he puts it, “Subway foot-long shit sandwiches” for him to choke down with official aplomb. To aid in his digestion, Miller has hired Liz Garvey, a slick American media consultant played by Brit Marling. Liz is new to London, and stuck with a buzzing fridge that keeps her up all night and a vibrating BlackBerry that consumes her days. Cursed with a cowboy streak, Liz burns bridges in her own department — her confrontations with the peacocking Finn (Bertie Carvel) are particularly tasty (“You are obsolete technology, Finn. You are a solar-powered fax machine”) — and innovates without regard for human life. Her biggest idea, for a London PD–supported news network (“Who generates more content than the police?”) is rightfully identified as “a bit North Korea” by Richard before he gives her the go-ahead. The job “is definitely fucking impossible,” he tells her. “Did no one tell you that at the interview?”

From there, Babylon’s orbit smartly spins outward from Scotland Yard’s towering glass house. Hasty PR decisions made by Richard and Liz affect the day-to-day lives of a trio of beat cops and a second threesome of “specialist firearms commandos,” one of whom, played well by Nick Blood, is suffering from barely diagnosed PTSD after shooting an unarmed man. Babylon takes special interest in Robbie (Adam Deacon), an eager pipsqueak who transitions from standard-issue police to rifle-packing specialist over the course of the series. When we first meet him, Robbie’s days are being chronicled by Matt (Black Mirror’s exceptional Daniel Kaluuya), an amoral documentarian who, unlike many at Scotland Yard, knows a ticking time bomb when he sees one. Taken together, these cops aren’t heroic, nor are they evil. What they are is distracted: by bureaucracy, by marital problems, by video games and stress. How can we expect these schmoes to save us when they can barely take care of themselves?

As the crises begin to pile up, from a youth riot and IEDs to reputation-ruining affairs, Babylon attempts something I’m not sure I’ve ever seen before. The relentless banter doesn’t stop — a terrorist threat segues into a reference to forgotten ’90s DJs Bomb the Bass. Instead, it begins to calcify and harden, a weak shield against the outrageous slings and arrows of real life. By Episode 4, Bain and Armstrong have, in effect, yanked the tablecloth out from their own show. Liz’s resourcefulness, Finn’s dirty tricks, Robbie’s giant gun are still on display. But now they’ve been exposed for the temporary Band-Aids they actually are. It’s a tonal shift as impressive as it is entertaining. Though funny, Babylon isn’t precisely a comedy. It’s a slow-churning tragedy about the disconnect between the rhetoric of forward-thinking police work and the clumsy, often violent reality of putting the same tired boots on the same filthy ground. Jaundiced and cynical, Babylon doesn’t make you feel safe. It makes you feel sad. Which, at this particular moment in history, feels just about right.

This post has been updated to correct an erroneous assertion that SundanceTV never aired the pilot to Babylon.

'The Right Reasons' Podcast: 'The Bachelor,' 'The Challenge,' and 'Real World'

‘Serial’ Season 2: Funkmaster Flex and the Curious Case of the Unnamed Shots