Kanye’s Beef With Jimmy Kimmel Ends Tonight, on Your Television 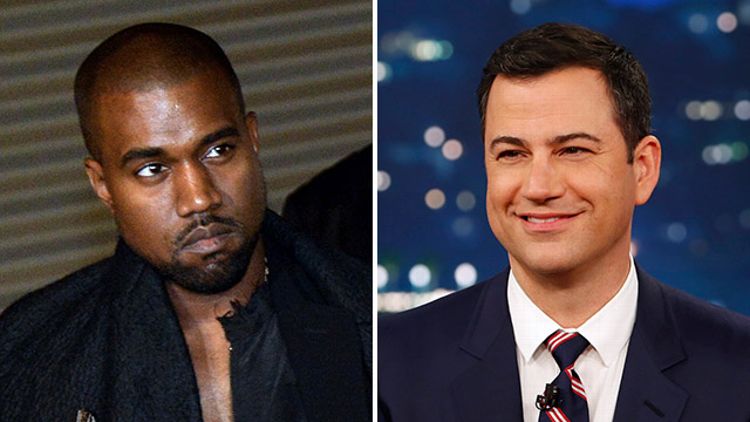 Recap: Kanye West donated an hour-long interview to the BBC; some were creative enough to call it “cuhraaazy,” while others tagged it “THE FIRST PIECE OF HONEST MEDIA IN YEARS”; Jimmy Kimmel put Yeezus’s words into the mouth of a charming kiddo for a parody; Kanye drove a Maybach made of caps lock keys straight into Twitter’s cyber-heart and invented #NODISRESPECTTOBENAFFLECK in the process; Kimmel recounted a chat with Kanye. “He told me I had two choices. No. 1, apologize publicly … and that was really the only choice — the other choice he gave was … your life is going to be much better if you apologize.” 'Ye also told Kimmel he’ll “never be able to show your face at a 14-year-old’s high school football game and be cool again.”

And now, two weeks after the beef hit the pan (since it got slaughtered? Finished defrosting? Which phase of the beef metaphor are we actually at?), Kanye will pay Kimmel a visit, “for real, yes and was it all a setup, no.” Elaborating on Tuesday night’s show, Kimmel said, “We will sit down and discuss it like normal people do — on television. It’ll just be us, and Dr. Phil. And neither of us is leaving until this government shutdown gets solved. So if you’ve always wanted to see a talk show host get strangled by a pair of leather jogging pants, join us tomorrow.”

Will Kimmel apologize and regain the luxury of showing his face at high school football games? Will he convince Kanye to team up for something like “I’m Fucking Ben Affleck” or “Celebrities Read Mean Tweets”? Will Kanye — who initially tweeted “I DON’T TAKE IT AS A JOKE,” that Kimmel was “OUT OF LINE,” and that Kimmel hadn’t received “TOO MUCH GOOD PUSSY” in his life — stay salty? Will we see the afore-threatened spoof about Kimmel’s face? Will Dr. Phil really be there? (There’s no way Phil’s latest tweet isn’t directly about this situation [and/or Terminator 2]: “The past is over. The future hasn’t happened yet. The only time is now.”) Will Kimmel wear leather jogging pants while Kanye does this on his desk?

However it plays out, the beef ends tonight — Kanye says or does exactly what he wants to say or do; Kimmel, like any comedian worth his late night talk show, diffuses tension enough to emerge unscathed and with season passes to all the high school football games. Or they could just call off the whole thing, accept this joint birthday invitation, and help a kid know Kanye’s not mad at him: