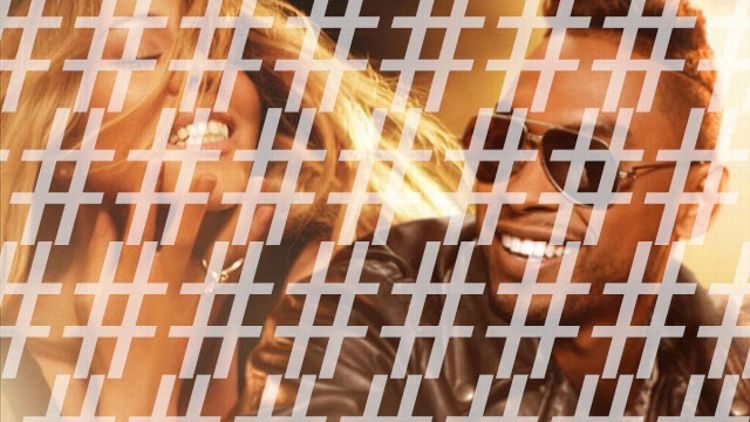 I’ve never been in one of these meetings, but one has to assume this is how it goes down:

Idea Haver: OK, so here’s my idea. This new song we have on our hands, it’s great, but I want to make sure it gets big. You know, VIRAL. Like the Gangnam Styles. So here’s what we’re going to do:

And I mean everywhere. Tweets, commercials, T-shirts, music videos, song titles, album names, anything we can. If we do it, and completely overwhelm the public with this plan, we can’t fail. Like the Gangnam Styles. OK, LET’S DO IT.

Like I said, this is purely speculatory, because I’ve never been invited to a record-label influencer millenial viral buzz social-media content-creation tastemaker brand-manager meeting, but I can’t be that far off.

But because of these meetings, we are here. And here is a horrible place where musical content, both good and bad, has been overrun with the hashtag.

For years now, the hashtag has been living predominantly in the realm of social media, and more recently, in the bottom right-hand corners of TV screens and at the final moments of movie trailers. In the past two months, however, the phenomenon has taken a turn for the “I wish I didn’t have eyes.”

Why, Robin? Did they threaten to give the song to Timberlake or (gasp) Bublé if you didn’t agree to the hashtag terms? So very confused, especially since this metadata stamp is really the only bad part of an otherwise great song and video.

Well, that and this:

I get it. Because if I am a robot cyborg moonlighting as a human with a Twitter account, it is assumed that as soon as I see this video, I will share the content as follows:

That’s the only explanation, because nothing else about this makes sense. WHO NEEDS HASHTAGS IN THE VIDEO WHEN YOU HAVE THIS?

But they didn’t stop there. It got so much more aggressive:

Idea Haver: So here’s the plan. There’s a line in the song that goes “I know you want it.” Well, because focus groups have shown us that “you” has been all but phased out in favor of “U,” we’ll change that, make a hashtag out of “#UWANTIT” and then, thanks to the viewing public’s rapidly decreasing brain cells, they’ll leave the commercial thinking they want speakers, and that if they want them, they must go to Radio Shack. LET’S GOOOOO.

Again, I was not in the #blurredlines meeting, but I can’t be wrong.

Will.i.Am, a man already ahead of his time because the Internet thinks his stage name is a hyperlink, has taken the next stop toward cross-platform viral domination by naming his new album #willpower.

And you’re familiar with his most recent high-profile single if you’ve watched 30 seconds of the NBA playoffs:

“Hashtag thatPOWER,” the first single off hashtag willpower. What on Earth is going on?

what a perfect collaboration! @iamwill& @justinbieber on #thatpower song from #willpower album!! here’s the video!! bit.ly/177BAqU

A beautiful thing happened this morning. I received a message asking me, “Have you heard the new Mariah and Miguel song?” This seemed like a great way to start the day. And then I heard the song.

Fantastic song. With everything that happens when sound exits Miguel’s larynx and Mariah’s continued ability to hit high runs, you can’t ask for much better from these two. Then I took a look at the image for the single:

Emergency Idea Haver: So we’re in a pickle, guys, but I have a plan. The issue: “Beautiful” is a very common word. People use it to describe all types of things, many of which have NOTHING to do with our song. That is a problem. So, I know this might be coming from left field, but we’ve got to throw a hashtag on the title. There’s no way we can promote and track this song effectively without naming the song “hashtag beautiful.” Genius, I know, hold your applause, #JUSTKIDDING LET’S GOOOOOOO.

Times are tough. Luckily, dealing with musical hashtagization (not a word today; will unfortunately be a word next month) is a classic case of voting with your feet. And if you feel as if the hashtaggery is beginning to seep into your once-pure subconscious, there are a few ways to deal with it.

I just wanna say that you’re #Beautiful, have a nice day ;)

In this case, the hashtag, endearingly, is more used to mimic italics, and has nothing to do with the Mariah song, which is #absolutelyfine. There are other ways to do this, but probably the most effective way at stopping this trend is like this:

There are a lot of songs called “Beautiful,” and I implore you to alert the world whenever you are listening to “#Beautiful Stranger” by Madonna, “#Beautiful Life” by Ace of Base, or “#Beautiful” by Snoop Dogg/Lion. If you think this seems like Internet trolling, you’re absolutely correct, but it’s no less absurd than what’s happening to you when hashtags are “casually” attached to songs, albums, and videos.

Yes, there are bigger battles to fight in this world, so I fully understand if you don’t want to go down this road. Trust me, it’s OK.

But if you want in, that’s great. There can never really be enough incorrect hashtagging of corporate attempts at manufactured viral success. The water’s #warm.