I Get Older, ‘It’s Always Sunny in Philadelphia’ Stays the Same 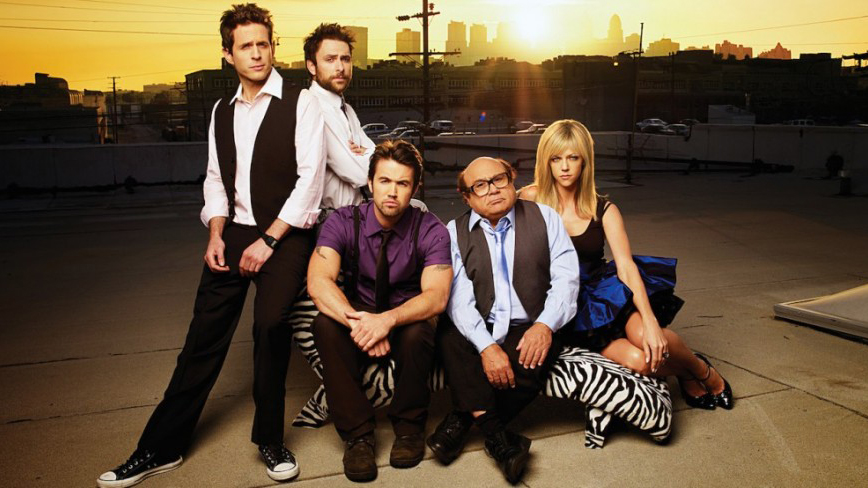 It’s Always Sunny in Philadelphia, which begins its 10th season tonight on FXX, has been on the air for almost a decade. It’s quite a run for something that started out as a short film about a guy trying to borrow some sugar. The show has been renewed for an 11th and 12th season already. What will the gang be up to by that time? Integrating Google Glass into Chardee MacDennis? Pranking the time-jump versions of the Parks and Rec cast? Complaining about President Mitt Romney? If this season is any indication, it’ll be the same old stuff, the jokes still deep in Paddy’s toilet. The year hardly matters.

There isn’t a ton new to say about the latest batch of episodes, other than that they’re another season of It’s Always Sunny in Philadelphia (and a pretty good one at that). There are a few very strong episodes, and a couple that aren’t so hot, and they add up to about what you’d expect, if you’ve been watching the show for a while. Dee gets drunk and hallucinates. Mac is casually anti-Semitic. Charlie is still one of the most heartbreaking and hilarious characters on television. It’s not unbelievably difficult to predict where each episode goes, based on the premise of the title. But that doesn’t really matter — this show is a well-oiled machine.

In that respect, Sunny defies the precedent of most other aging sitcoms, which tend to run themselves into the ground. Though there was a brief rough patch, it seems like Sunny might be able to run indefinitely. Why? Partially, it’s because the show hasn’t done nearly as many episodes as its network counterparts (woo-hoo, cable). But it’s more than that. It’s Always Sunny derives most of its humor value from the expected — practically every cold open ends with a highly predictable smash cut to the title of the episode. Over a decade, we’ve come to learn how these characters think, and their plasticity is part of what makes them fun. It’s not hard to predict the one or two ways they might react to any given situation (usually the worst way possible). Or at least, it’s not hard for me.

I was 13 when It’s Always Sunny in Philadelphia premiered, and got into the series sometime around “Sweet Dee’s Dating a Retarded Person,” in 2007 — I was then a 15-year-old boy. I was the perfect audience for the show.

By the time the musical episode “The Nightman Cometh” aired (probably the peak of Sunny’s popularity), I was 16 and obsessed. My first-ever meaningless best-of list for my high school newspaper had Sunny as the best TV show of 2008 (followed closely by NCIS). It was also my pick for best TV series of 2009 (when it was followed by 30 Rock — my taste was improving). For at least a couple of years, I found “The D.E.N.N.I.S. System” a perfect symphony of jokes, and thought the end of “The Gang Solves the Gas Crisis” was the pinnacle of comedy.

It was funny because of how ridiculous it was, how horrifying. I told a high school friend on Gchat that it was “like Seinfeld, but all the characters have no morals,” which I, of course, found awesome. Some of the manifestations of that were … not awesome. (Some of my friends used to joke about D.E.N.N.I.S.-ing people we knew. It was bad.)

In the time I’ve been a fan of Sunny, Dee has had a baby, almost the entire Obama administration has elapsed, and, more important, Mac got fat and then skinny again. I’d like to think I’m a little less immature (though only a little). I don’t find the racist jokes as funny. And a lot of the old classics don’t really do much for me anymore. But the gang is still the same (a bit more sociopathic, if anything). The show’s consistency is impressive. But growing up, and remaining a fan, is a little odd.

Much of the last few seasons of It’s Always Sunny has nodded to that passage of time, especially in the climactic high school reunion episode, which would have made a fitting series finale. Other episodes have interrogated the characters and their increasing remove from the rest of humanity, like last season’s “Mac Day,” which presented a healthy, successful version of the character, who actually knew how to perform an ocular pat-down. But much of this season focuses on affirming and reaffirming the central dynamic of the gang, including an episode in which everyone tries to go their own way.

“I think we’re just hitting our stride,” Frank says in the sixth episode of this season, and it’s clear he means it. But the solution to the characters’ problems is a confirmation of everyone’s self-delusions — Mac convincing himself that he’s straight, Charlie that he’s got a shot with the Waitress, and Frank that he can maintain an erection. Ignoring the ravages of time is the closest this show will ever get to a traditional sitcom lesson.

It’s not unusual for TV shows to become increasingly about themselves as they age — Season 3 of Community, anyone? — but it works really well on Sunny because of the solidity of the base. When everyone is insane, it’s easy for the show to dive into its own neurotic affliction, something Sunny did with its characters in “The Gang Gets Analyzed,” and with its own critical reception in “The Gang Tries Desperately to Win an Award.” Season 10 digs deep into this well, raising questions about issues that used to haunt the fringes of the series, like Charlie’s paternity.

The experience of watching Sunny is oddly similar — it’s more about what the show has represented. All of the stuff I used to find hilarious because it was gross has become funny because it makes me cringe.

So now, Sunny is less wish fulfillment and more delightfully painful, but still funny. Tonight’s season premiere leaves the confines of Philadelphia, touching down in L.A. for a minute, after a drinking contest on a cross-country flight. But the gang’s reaction is more or less a big shrug before they head right back to Philly. And that’s what it comes down to — even in the far-flung era of 2017, watching It’s Always Sunny will still be returning to a comfortable place, one that’s fun and gross for 22 minutes, even if the shit flies from a different angle.