‘Independence Day 2’: If Jeff Goldblum’s in, Just Toss Will Smith and Let’s Get On With This 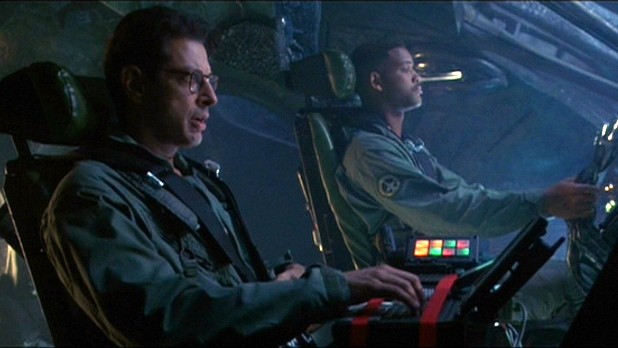 The world of sequels and threequels and squeakquels and prequels and biebquels that we’re currently living in is a terrible one. It’s a world that exists because we live in a lazy time, a time when anything that makes a decent amount of money needs to be duplicated. Nothing good can just happen and then end. Things only end once people are tired of them, which, when applied to relationships and marriage and ultimately divorce, is super dark. But, you know, welcome to Earth. Love it or leave it.

But with all things, there’s the occasional outlier. The exception to the rule. No, not something that’s original and will stay original — those days are gone. I mean a sequel that actually needs to happen. A sequel that no one should have any reservations about. Because in its current, rumored form, it’s shaping up to happen exactly the way it needs to happen.

A sequel like Independence Day 2, with Jeff Goldblum and (probably) without Will Smith.

The Hollywood Reporter notes, “It remains unknown whether or not Will Smith will appear in the planned follow-up to 1996’s Independence Day (There are apparently two versions of the screenplay depending on whether or not he’s part of the project, although director Roland Emmerich has suggested that the actor is out of the movie’s price range these days).” When attempting to make a film, this kind of uncertainty must be stressful, especially when it revolves around someone like Will Smith. Which is why I have a suggestion. A very good suggestion.

Just move on. Throw away the screenplay with Will. You’re better off without him, Roland. I know Will’s a major part of your rise, but just move on. Because don’t forget — you have the king.

Apologies for what I’m about to do here:

Oops, wrong one, here we go.

From an interview with Time, here’s Goldblum on his prospects of being in the film:

I had a meeting and have been talking over the last several months or year with Roland Emmerich and Dean Devlin, the producer, and they’ve been cooking up and say they have a part for me in what they hope will be a plan to make another one pretty soon.

Later, he described the progress of the film as “brewing,” which is a great sign. The subtle thing in this statement, however, is “they have a part for me.” He says it in a slightly offhand, modest manner, almost as if he’s making a mere cameo.

But Roland wouldn’t do that. Because Roland knows what to do.

What we know is that Bill Pullman is also back, reprising his role (presumably as the ex-president, because the film is picking up in real time). And that the plan is for two sequels to be made. And that, again, there’s probably no Will Smith in sight.

Which, again, is a good thing.

And this is all going to take place in the first four hours of filming.

You’re fine without Will, Roland. It’s so easy to make the public forget about him. You can solve it with one simple decision:

Cast Michael B. Jordan and keep it moving.

And yes, of course, Miles Teller plays Jordan’s co-hero. And yes, absolutely cast Goldblum as Teller’s father. And yes, they definitely need to rename Pennsylvania Avenue “Russell Casse Lane.” And without question, Tessa Thompson should play Jordan’s girlfriend. And yes, Teller’s boyfriend should be Zac Efron. AND WILL JEFF GOLDBLUM HAVE A PROBLEM WITH THAT RELATIONSHIP, ABSOLUTELY NOT. AND WILL THEY GET MARRIED UPON TELLER’S RETURN TO EARTH AFTER DEFEATING THE ALIENS, WITH PAPA GOLDBLUM OFFICIATING? ABSOLUTELY.

THAT AWKWARD MOMENT, I THINK NOT.

Will out. MBJ in. Dr. Ian Malcolm has a gay hero son who’s also really good at drumming.

Grantland Recommends: ‘The Honorable Woman,’ ‘Every Day Is for the Thief,’ Serial, and More

Grillo ’Em All: The Rise of a Hollywood Tough Guy