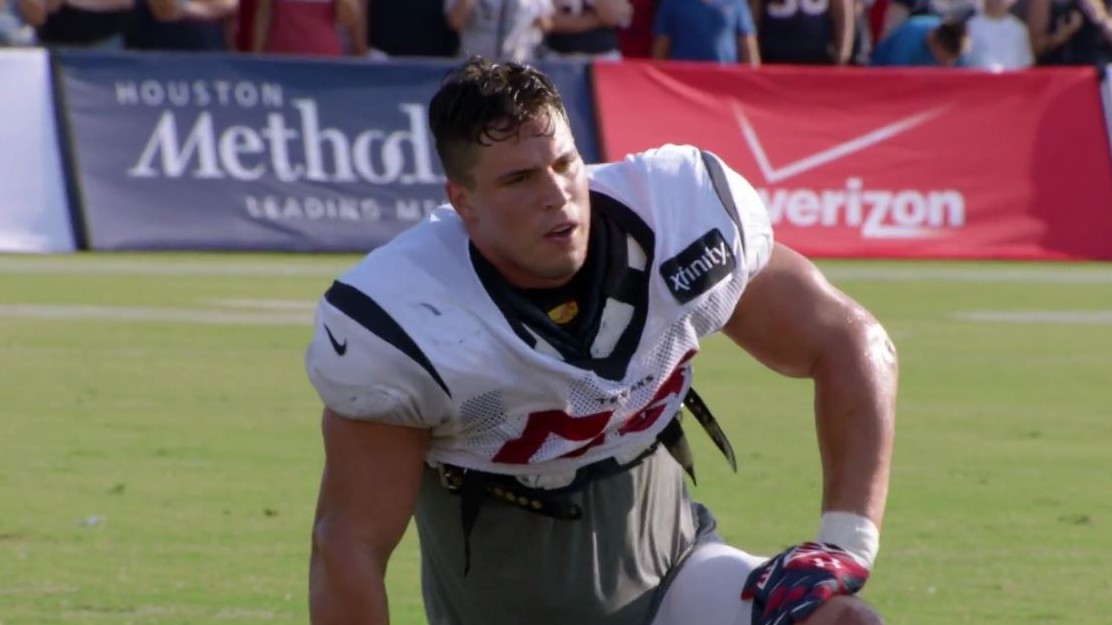 Let’s not dance around with an unnecessary intro.

Some things that happened last night in Episode 2: 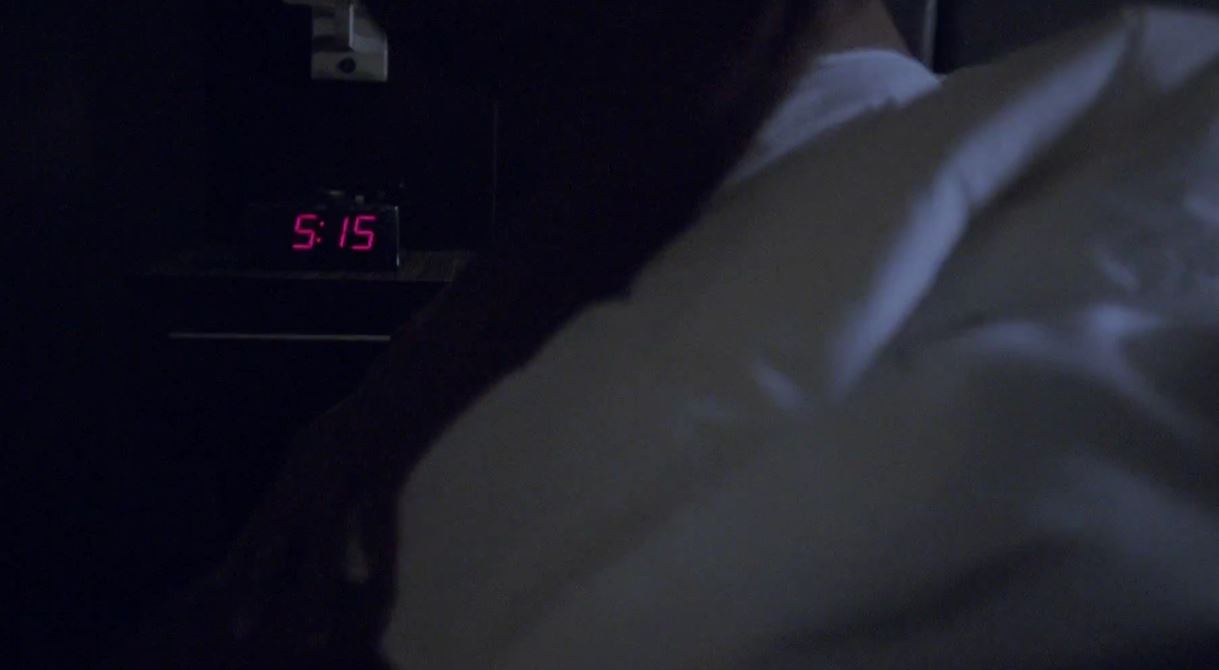 At the beginning of the montage that starts the episode, a player is shown waking up (presumably) to get ready to go to practice. He leans over and paws at an alarm clock. The time that’s shown on the alarm clock: 5:15 a.m. FIVE FIFTEEN. Ryan Mallett’s jersey number is 15. Last season, Ryan Mallett was named the starting quarterback for the Texans on November 5. That’s too big of a coincidence. Ryan Mallett is your starting QB.

At the end of the intro montage, a player is shown getting into bed (presumably) after a long day of practice. When he gets into the bed, we’re shown a quick shot of an alarm clock. The time that’s shown on the alarm clock: 10:29 p.m. TEN TWENTY-NINE. Brian Hoyer is 29 years old. Also: Brian Hoyer went to Michigan State University, which is a Big Ten school. That’s too big of a coincidence. Brian Hoyer is your starting QB.

Glen is so clutch.

Also: Who’s Glen? He doesn’t get shown. Does anyone know?

Also-also: This is the second episode in a row in which O’Brien has expressed affection for Rick Ross’s music. That’s great. It makes so much sense that O’Brien likes him. I’m not sure exactly WHY it makes sense, but it just does, and I am very excited about it.

Last week, despite receiving far less camera time, Vrabel managed to out-FUCK O’Brien 13-12, establishing a blistering FPM1 rate. He maintained that same pace through Episode 2, shotgun-blasting off six of them despite being on camera less than a minute cumulatively. O’Brien, very likely embarrassed2 to have found himself behind in the competition despite being one of the focal points of the series opener, took just 34 seconds into Episode 2 to fire off his first, and then maintained a steady pace throughout the rest of the episode, tallying up nine of his own. I’m very invested in this. 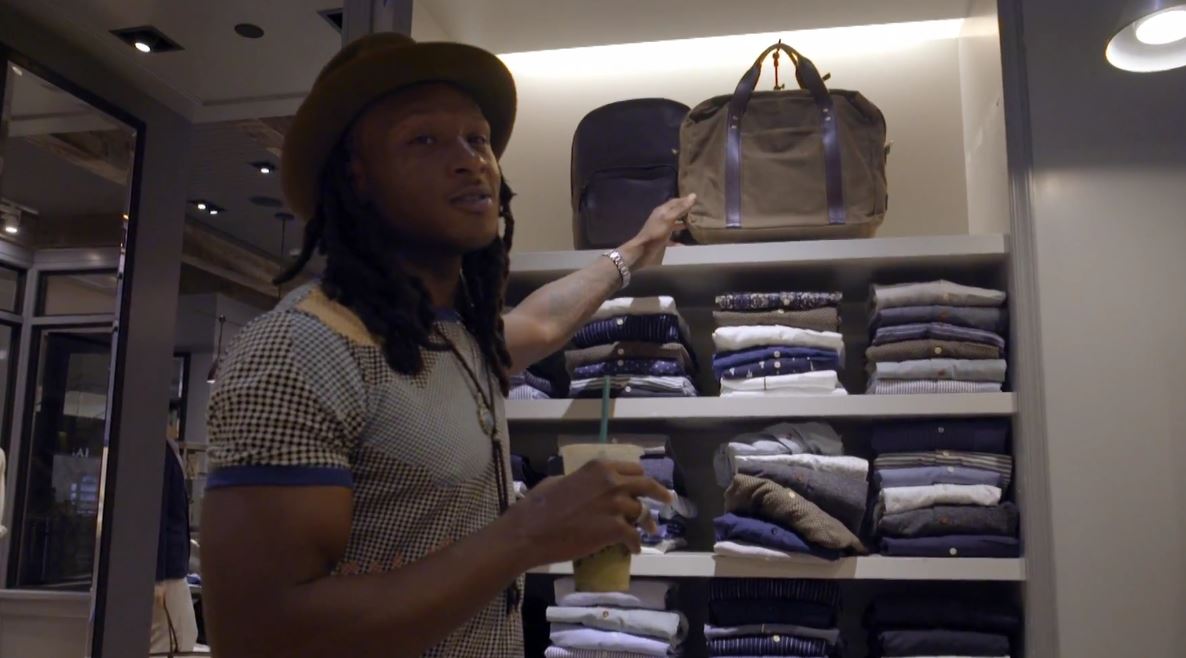 Wide receiver DeAndre Hopkins, who is the most stylishly aware player on the team, mentioned that he was thinking about getting a Yorkshire terrier, which is a very tiny companion dog. When asked why, he responded, “So I can have, like, a man-bag and carry the dog in my bag.” Expanding on his explanation, Hopkins said he hoped to take the dog to nightclubs. So, to recap: Professional football player DeAndre Hopkins is interested in purchasing a dog small enough to fit in a bag, specifically so that he can carry it around in that bag, more specifically so he can do so at a nightclub. That is a gorgeous and wonderful thing. It’s also a thing many in Houston would describe as “doing too much.” Doing too much is a key Houston characteristic. People in Houston do too much all the time. We love it. It’s the best thing.

The Most Unintentionally Funny Answer to a Goofy Question

The Most Personally Exciting Moment on the Episode

There was a brief section where they showed RB Alfred Blue going to get his hair cut. The barbershop he was in was the same one I go to when I bother to go to a barbershop. It’s off Main Street, just a couple of minutes from the stadium. AND MORE: The guy who cut Blue’s hair is the same guy who cut my hair the most recent time I was there. That was on June 30. I remember the date because a weird thing happened. A guy was in the chair, getting his hair cut, and some police came and started asking around for a person named Brian. Nobody would identify who Brian was.

Cop: Which one of you all is Brian?

Cop: We know one of you is Brian.

Cop: We’re about to check IDs.

They took him outside, questioned him for about 30 minutes, then let him come back in and finish getting his hair cut. It turned out that some of his friends had (allegedly) robbed a pizza guy of the pizza he was delivering and then (allegedly) took it back to Brian’s house to eat it. The police wanted him to snitch. It was the worst episode of First 48 I’ve ever seen.

Saddest Moment of the Episode

During a small piece about how DeAndre Hopkins has become one of the five best players on the team, there’s a shot where a Texans employee is putting up a new DeAndre Hopkins marquee. That’s not the sad thing. It’s for sure not the sad thing. It’s a great thing. The sad thing is that to put up the Hopkins marquee, the guy doing it had to take down the one for Andre Johnson, the second-best player in franchise history and also a person who decided he didn’t want to play for the team anymore after 12 seasons because he was tired of not winning. 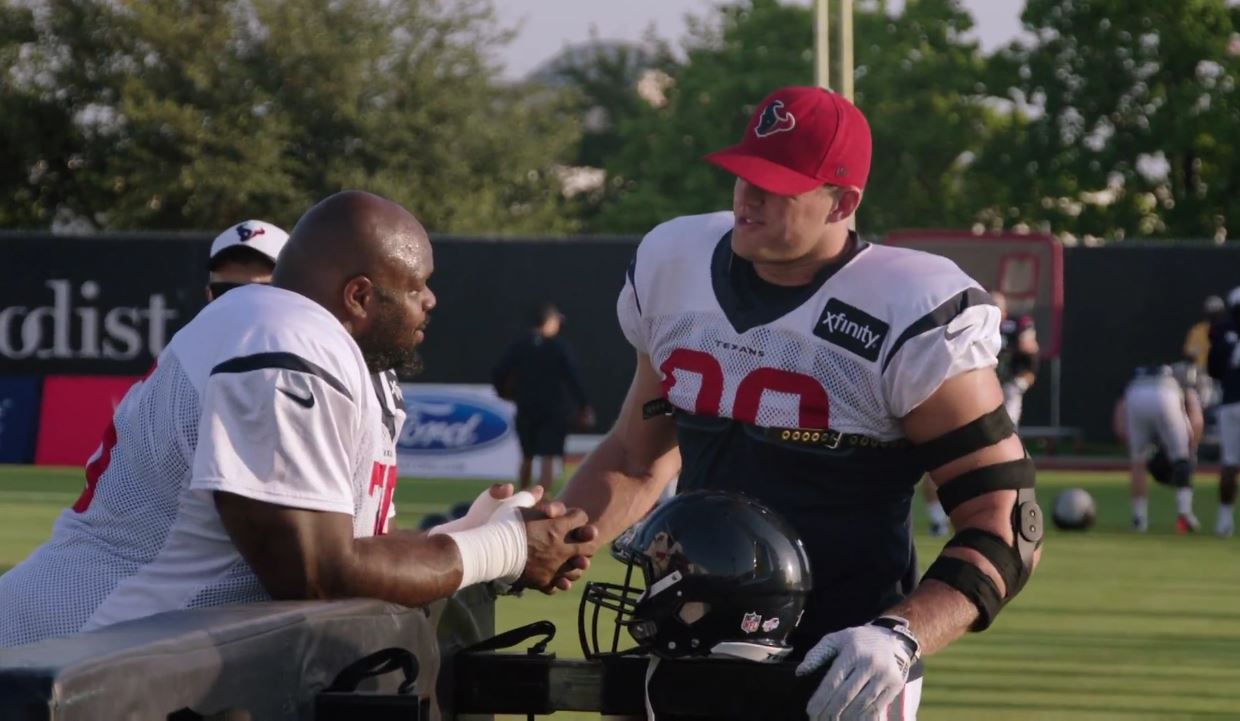 1. J.J. Watt inviting himself to breakfast at Vince Wilfork’s house

1a. J.J. Watt resisting the peer pressure to wear a jock strap

1b. J.J. Watt being dismissive of the coach’s concern that the defensive line isn’t stopping the run

1d. J.J. Watt asking how much of a gain a running back got on a play

1f. J.J. Watt not having to practice

1g. J.J. Watt talking about going through warm-ups too hard

The Grossest Moment of the Episode 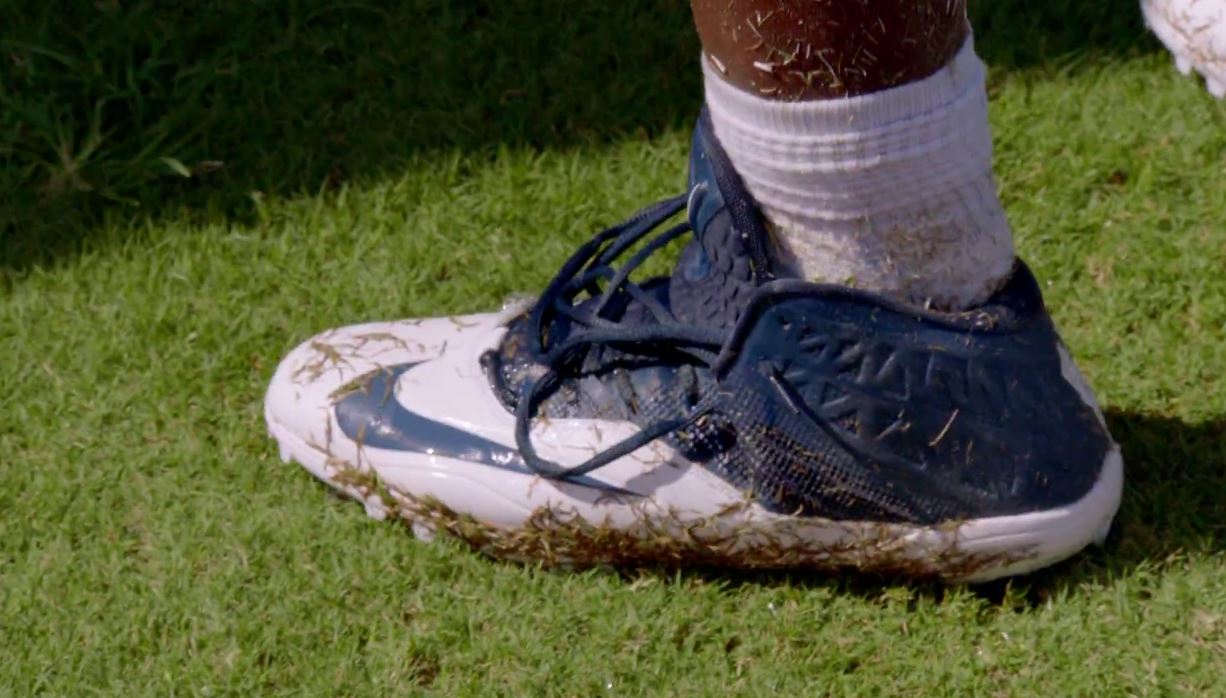 Vince Wilfork sweating so much that his shoes bubble when he bends his foot.

The Second-Grossest Moment of the Episode

Vince Wilfork tending to his foot in the locker room. We don’t need that kind of access.

The Best Brian Cushing Exchanges of the Episode 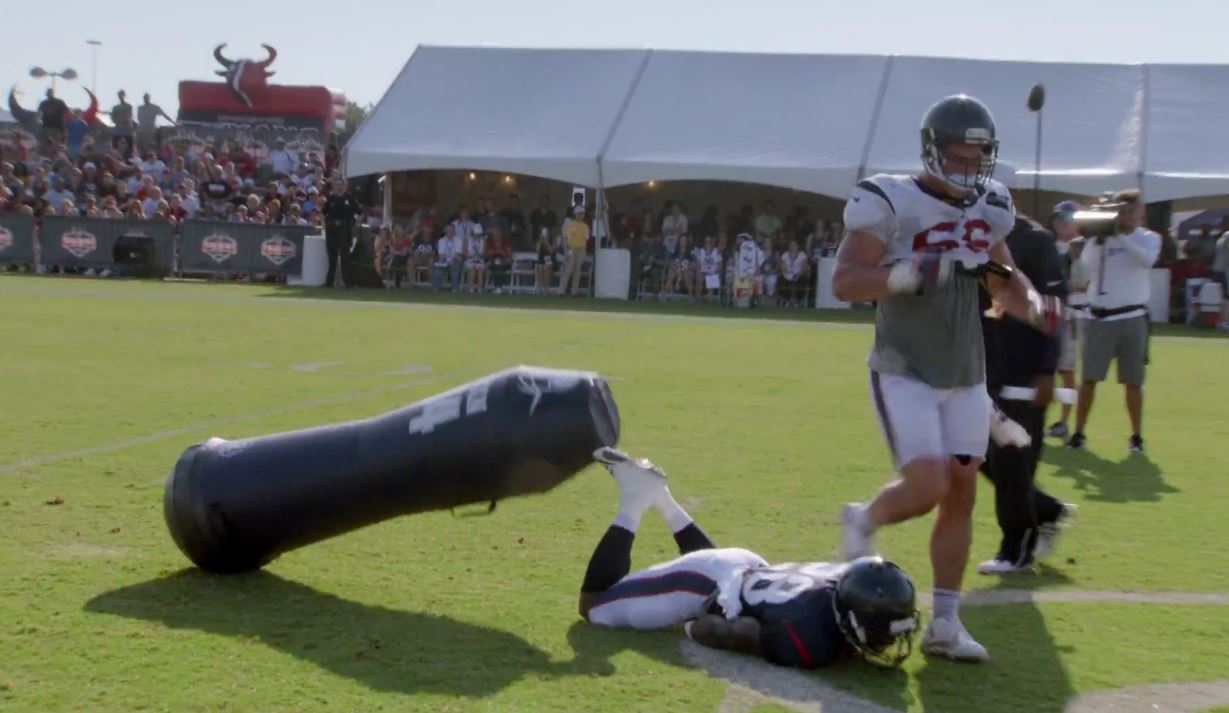 Linebacker Brian Cushing has been a beloved player in Houston since he was drafted in 2009. He became a cult hero in 2011 after the NFL featured him on the Sound FX series where it mics up a player during a game. He was brash (openly taunting opposing players after tackling them), he was cocky (he sacked the quarterback and then asked three separate people on his team what they thought of his sack celebration; he offered to play 1-vs.-11 against the Browns offense; he offered to play quarterback for the Texans), he was funny (he asked Arian Foster, the Texans’ philosophical running back, if he thinks about haikus while he runs the ball), and he was psychotic (he took his helmet off and head-butted a Browns player after the Browns player shoved him, splitting his own head open). In 2012, he tore his ACL. In 2013, he broke his leg. And now, FINALLY, he looks fully back and, thankfully, still fully entertaining. He was the featured player on Episode 2. His best exchanges:

While sitting down near Hopkins during a break:

Hopkins: Do you drink lattes?

Cushing: I don’t even go to Starbucks.

Cushing: So you gel your hair down? Is that the new look?

Cushing: Yeahhhh, it looks crappy. Who did that? Your dad? What is that? Daddy look?

Cushing: Hell yeah, man. You might actually get some girls then.

While talking to a player on the sideline about players trying to block him:

[purposely bumps into RB Alfred Blue between plays] “My bad. Just kidding. I did it on purpose.”

After Alfred Blue, who’d been trying to block Cushing and was fed up with his antics, shoved him in the back after blocking him:

[snorts fire out of his nose and mouth]

[puts helmet back on]

[He and Blue line up to do the same drill where Blue is supposed to block him.]

[He charges through Blue, throws Blue to the ground after sacking the QB dummy.]

“That’s two sacks. Him and the quarterback.”

Later on, to LB Jadeveon Clowney, who definitely did not ask Cushing about the situation:

“Don’t ever push me extra like that. I mean, first of all, you’re not gonna block me. Second of all, you don’t wanna fight me. Third of all … I’m the man.”

I’ve missed you so much, Brian.

I love you so much, Brian.

One Scare Too Many: ‘Sinister 2,’ ‘Paranormal Activity,’ and the Impossibility of Horror Sequels