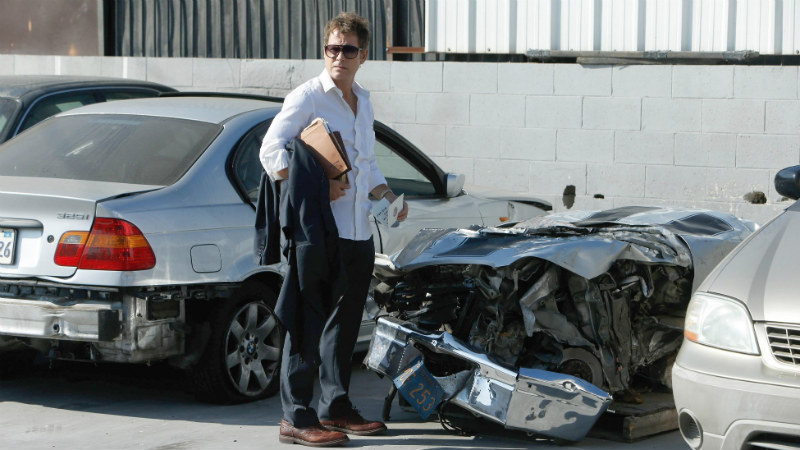 Rake, premiering tonight on Fox at 9 p.m. ET, is about a defense attorney named Keegan Deane. The first thing you should know about Keegan Deane is that he’s an asshole. He’s an inveterate gambler, a blackout drunk, and a deadbeat boss and dad. “All of my clients are guilty,” he says blithely, marking one of the few times he mentions them at all. Keegan thinks nothing of sneaking a hookup into a child’s bedroom, passing out in his best friend’s breakfast nook, or paying off prostitutes before paying his staff. His phone takes precedence over his son. A decaying fish in the trunk takes precedence over all.

Aha, but savvy readers will already know that Keegan Deane is played by the permanently affable Greg Kinnear. This should be your first clue that Keegan is no ordinary asshole. He is instead the latest iteration of a magical species rarely glimpsed outside of our televisions: the lovable asshole. The thing is about Keegan: He just can’t help himself. Even though he’s already in debt for 59 large, a high-stakes poker game and a midday nooner call to him more loudly than his responsibilities. The world may appear to be out to get Keegan Deane — there are a staggering 11 minutes of face-punching, car-towing, money-losing high jinks before the opening credits even roll in tonight’s episode — but Keegan treats them as merely waves in an otherwise placid and inviting ocean. Nothing is truly his fault. He’s just trying to stay afloat. It’s a level of nonchalant denial that’s almost beautiful to see: He’s the shark who thinks he’s surfing.

It helps that, thanks to director Sam Raimi, Keegan’s Los Angeles is a brightly lit fun house of enabling and indulgence. The pretty, mute hookup he ensnares in the opening minutes, then abandons for a game of Texas Hold ’em? She wants him to call. The secretary (Tara Summers) who works tirelessly despite no evidence of a paycheck? She lugs the aforementioned frozen tuna carcass (long story) across town herself. The prostitute (Bojana Novakovic) banters with him like a girlfriend, the vig-collecting muscle (Omar J. Dorsey) chats him up like a pal. Even his ex-wife (Miranda Otto, deserving better) straddles him to prove a point. When Keegan’s real BFF, played by the always interesting John Ortiz, snatches the empty bottle of scotch from his buddy’s slumbering hand, his first impulse is to lie to his wife. When said wife, played by the electric Necar Zadegan, comes downstairs, she doesn’t get mad. She lends the reeking Keegan her car and tells him to drive her kids to school. This is all meant to color our opinion of Rake’s lead – he’s not a bad guy, he just acts like it! – but what it actually does is ruin our impression of everyone around him. At best, Ortiz and Zadegan are dummies. At worst, they’re irresponsible lunatics. And that’s before the cops catch Keegan driving a minivan with an expired license.

Rake is based on a popular Australian series of the same name and adapted by that show’s creator, Peter Duncan. (Rescue Me co-creator Peter Tolan is an executive producer.) As currently constructed, this clumsy American version clearly looked to House M.D. as an example of how to make an antihero work on broadcast TV. But that show’s dark lead was a better, and more simply drawn binary: Gregory House was a miracle worker as a doctor and a disaster as a human. Rake, by contrast, is a series so desperate for us to love its antihero and simultaneously terrified of his rough edges that it chases after him with a lathe. I have to imagine that’s why the original pilot (also directed by Raimi) was scrapped sometime between the giddy moment in May when Fox green-lit such a potentially risky show and the slowly dawning realization that it would actually have to air it. Tonight’s episode was initially intended to be the show’s fourth, and whatever spiky bits were once present have been sanded down to anodyne blandness. It’s now a show about alcoholism with no hangovers, violence with no bruising, and addiction with no consequences.

The most interesting aspect has become not Keegan himself but the work he occasionally deigns to do: As a defense attorney representing only hopeless cases, Keegan demonstrates a refreshing cynicism about police, fairness, and the justice system in general. Far more than the rote drinking and whoring that dominate the hour, it’s this skepticism that, if stoked, could be downright radical — particularly for network television in which institutions are far more likely to be celebrated (Law & Order, Parks and Recreation) than attacked. And Kinnear, with his Boy Scout features slowly softening into troop leader, has the perfect smile to camouflage surprisingly sharp teeth. Unfortunately, all this has also been disappointingly neutered: In the premiere, Keegan’s self-serving gadflyism is buttressed by a fever of righteousness that arrives so suddenly I found it more off-putting than his usual bad behavior.

I admire the intent here, even as I shake my head over the results. TV could use more ne’er-do-wells with smiles on their faces; capers and high jinks are far more welcome than serial killers and antlers. The problem with Rake is that, like its unflappable protagonist, it’s desperate to have it both ways, to be loved for its flaws, not in spite of them. Rake wants to be applauded for its bravery as it skates out onto thin ice it’s too lightweight and flimsy to crack. From what I understand, Fox still intends to air the original pilot, suggesting Keegan’s life may eventually grow more interesting and dark. For now, we’re stuck with Hollywood-dark that is really closer to dim.

Arrests Have Been Made in 'Goodfellas' Lufthansa Heist of 1978