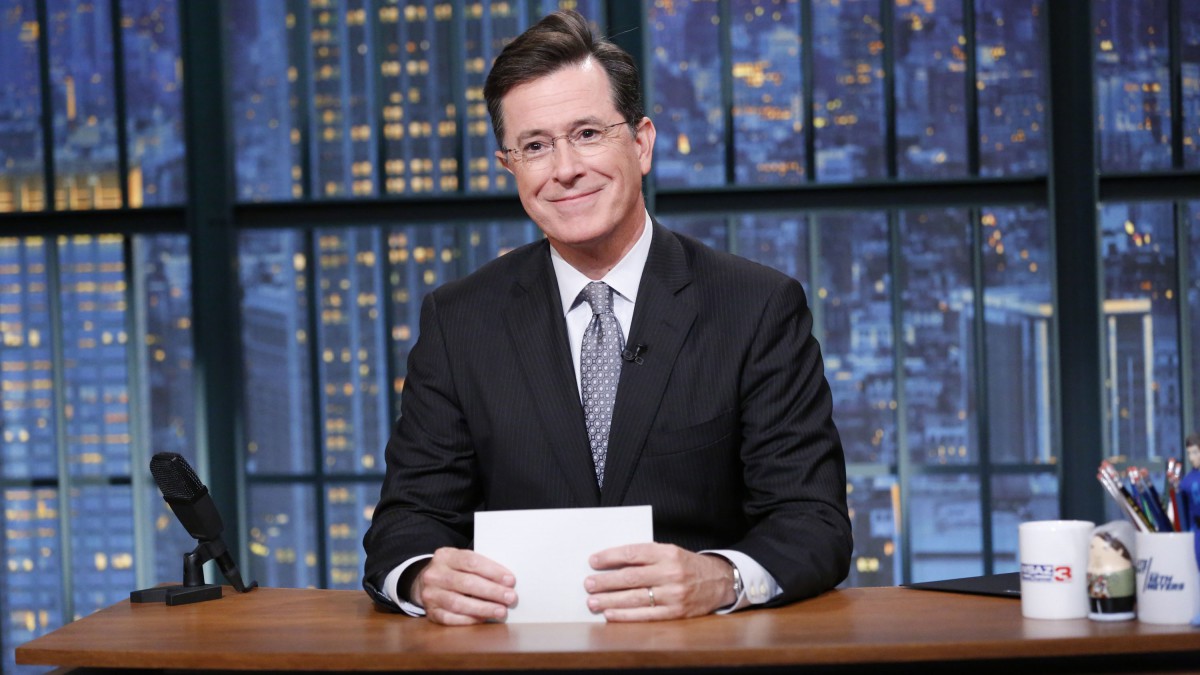 It wasn’t all an act. That’s the first thing I learned when I sat down with Stephen Colbert in his office five years ago for a magazine cover story. Yes, the sweatshirted man I met that day was Stephen — no quotes — Colbert, a friendly, exhausted 45-year-old, still jet-lagged from a recent trip to Iraq. There was no suit. There was no bloviating. There was no truthiness, just its far less entertaining sibling, truth. “I’m a comedian,” Colbert told me that day. “If I ever forget that, I am fucked!”

But Clark Kent he was not. As we spoke across a desk littered with scripts and swag, it was impossible to miss the superhuman clicking of Colbert’s mind. He claimed to be tired and then, very politely, rewound to a previous comment in order to correct his own grammar. Every question I posed was processed, considered, and then spun into a dazzling display of comic ingenuity. The character is famously quick. The performer is Usain Bolt.

At one point Colbert launched into a long jag about “him” — meaning “Stephen Colbert,” the gasbag who would take the stage just a few hours after we spoke — and the myriad ways he would have bluffed his way through an extended military tour. (“My weeks were like dog weeks!”) The real Stephen spoke of the fake Stephen like a wayward cousin, the black sheep who wanders far afield but whom you are genetically required to love. The character wasn’t just real in that moment, he was alive — evolving, changing, acquiring new bits of history and delicious dollops of schadenfreude. In that moment, I realized that the most impressive thing about Stephen Colbert is that he was spending nearly every waking moment of his life thinking for two. Forget what I said before about speed. This was a guy running the 100-meter dash as a three-legged race. And winning every time.

The Colbert Report goes dark tonight on Comedy Central, after nine years, two presidential runs, a branded ice cream flavor, and at least one space treadmill. TV will never see an accomplishment that equals it. In the days and weeks to come, there will be a plethora of remembrances of Colbert the political actor, the way his show gleefully punctured the self-inflated balloons of cable news. At any point in the last nine years it was possible to tune in at 11:30 p.m. and see all manner of right-wing hypocrisy hoisted by its own petard. By speaking with the same shouty authority as his targets — and claiming to harbor many of their same views — Colbert was a wolf in elephant‘s clothing. The joke wasn’t just on him. He wore it proudly, like an American flag.

This wasn’t easy, but it wasn’t remotely the hardest part of what Stephen Colbert did. Forget about the parody. Focus on the performance. Colbert took a one-note premise and somehow conducted a Wagnerian symphony with it, one that lasted nearly a decade. (Longer, actually, if you count the character’s more constrained origins on The Daily Show.) We’ve taken this for granted for so long that it’s been easy to forget how unprecedented this is, how totally unique. There’s a reason SNL sketches don’t last longer than five minutes. It’s the same reason the hosts of long-running talk shows are all straight men1 reacting to the lunacy that surrounds them. Consider Letterman’s raised eyebrow, John Oliver’s disheveled incredulity. Colbert, by contrast, was both inmate and director of the asylum. To go out every night in front of a million people with a script but no net was madness.

But madness can be infectious. To watch Colbert was to breathe deeply of the same nitrous oxide that bubbles in the lungs of anyone foolish enough to get onstage and try to coax laughter out of silence, from your college improv group to Chris Rock at Carnegie Hall. There was joy in each moment of Colbert’s performance, the shit-eating grin of someone who has scrabbled way too far off of the ledge to consider falling. If you’ve ever taken the time to watch videos of the carnival ride known as the Sling Shot, you’re familiar with a certain kind of hysterics, one that follows the initial tsunami of adrenaline and terror. The sound people make on that ride is not too dissimilar from the guffawing provoked by Colbert’s own gravity-defying act. No character in television history has ever flown so high, for so long. The question to ask of Stephen Colbert today isn’t “How could you ever stop?” It’s “How could you ever possibly have started?”

Last night, in his penultimate show, Colbert was as clever as ever: raffling off pieces of his set, outing himself as Banksy, castigating Michael Stipe sitting glumly in the corner. During the interview — still the most electrifying segment of the program due to its total improvisation — Colbert grilled National Book Award winner Phil Klay about his unromantic vision of the Iraq War and even tossed in a few off-the-cuff jokes about The Odyssey. It was possible to imagine this same show continuing forever; its voice was that sharp, its jokes were that crisp. But there was also an air of restlessness that was impossible to miss.

Colbert spent the first segment of the show holding a garage sale for nine years’ worth of detritus: awards, speeches, that same sad Michael Stipe. The Colbert pawning all this crap off was decidedly unsentimental, and, in his casualwear, he looked an awful lot like the guy I had met in 2009: not the character, but the man. I wouldn’t say he looked as tired as the Colbert I met back then. Older, maybe, though not by much. But he certainly looked ready to go.

The Colbert Report was a box that, through talent and stamina, was stretched into a galaxy. The Late Show comes with an inflated paycheck, yes, and also a long and bucktoothed shadow. But to Stephen Colbert, it also represents a well-deserved emancipation. He now has the chance to begin something new, under his own name and using his own vibrant personality. The race is won; a great talent’s legs have been untied. Let’s not be sad about this. It’s time to let the eagle soar.

'Rembert Explains' Podcast: D'Angelo, and Reviewing the Year in Sports With Clinton Yates