‘Community,’ ‘Rick and Morty,’ and the Winning Return of Dan Harmon 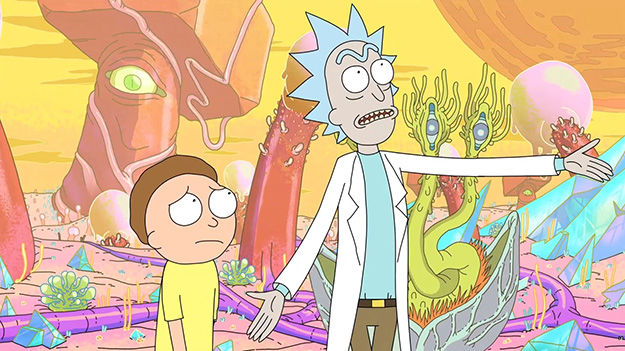 A year ago next month, this website ran a titanic feature by Alex Pappademas called “God Needs a Hobby.” In the course of its nearly 9,000 words, Alex painted an alternately sympathetic and alarming portrait of Dan Harmon, the undisputed comedy genius who created NBC’s cult-y Community only to have it snatched away from him after three increasingly unhinged seasons of perfectionism and abuse. In February 2013, Harmon was undoubtedly “the most famously unemployed writer in Hollywood.” He was touring the country, getting drunk in front of live microphones, and turning whatever made it on tape into podcasts. He was venting on Tumblr. He was toasting marshmallows in the raging bonfire he’d made out of every professional bridge he’d ever built.

What a difference a year makes. In May, NBC renewed Community for a fifth season and allowed its studio, Sony, to put Harmon back in control — a word that, to that point, had rarely been associated with Community’s tumultuous production. It’s unclear if Harmon was chastened by the experience or even much changed. But the results so far speak for themselves: The first five episodes of the fifth season have been tremendous. Gone are the mawkish, imitative flailings of the Harmon-less “gas leak year” and, perhaps just as important, gone too is the dark defensiveness that soured the final months of the first Harmon era. This is a Community that feels lighter on its feet — it’s now the proud inheritor of the 30 Rock Memorial Award for the fastest jokes on television — but also weightier, more lived in, and emotionally true. I thought “Cooperative Polygraphy,” the remarkably tender, uncommonly precise half hour that paid tribute to the now departed Chevy Chase would stand as the season’s high point, but “Geothermal Escapism” managed to top it just one week later.

An episode struggling to say good-bye to a beloved character that is about struggling to say good-bye to a beloved character is unquestionably meta; it’s the sort of on-the-nose cake-having and -eating that has alienated me from Community in the past. But here it was entirely earned. The Troy-fueled “Escapism” was a full-scale descent into juvenile insanity (the floor is made of lava! Dystopias can form before lunch!) that worked on every level, thanks to Britta being the voice of maturity, not merely lameness, and the eruption of actual feelings that followed all the game playing. I never agreed with the many, many Internet partisans who felt that Community was the best comedy on television. It was certainly the most interesting, the one willing to take the boldest creative leaps and, because of that, the one most likely to fall on its creative face. But now I’m starting to come around. Perhaps because he’s seen life on the other side of the studio gate, Harmon seems more willing to accept the inclusiveness that’s always been built into his show’s DNA. It’s TV 101 — meaning Abed probably placed out of it years ago — but sitcoms are always more appealing when the mismatched characters come together for something, not to spite the world around them. Community still hits when it hugs. I just no longer feel as if it’s hitting me.

It feels exceedingly strange to be talking about Dan Harmon as a stabilizing influence, but here we are. And it’s not just creatively: While the rest of NBC’s disastrous comedy lineup continues to Britta all around it, Community has done what it’s always done: deliver a consistent number of viewers (this season, just north of three million) and, more important, a consistent rating in the key 18-to-49-year-old demographic (1.1 vs. the truly dreadful 0.7 currently being sported by the more heavily hyped The Michael J. Fox Show). Even though original cast members are falling like Magnitude in a paintball war, Community now seems likely to be renewed for yet another improbable season. At NBC, barely staying afloat is not the same thing as drowning.

And Harmon is positively water-skiing when you take into account Rick and Morty, the cartoon he created with Justin Roiland for Adult Swim. Though it premiered just over a month ago, the series — about a drunk, dangerous Doc Brown–type inventor and his sad-sack, McFly-ish teenage grandson — is a hit. As Joe Adalian pointed out yesterday on Vulture, the most recent episode notched a 1.5 rating in Adult Swim’s most important demographic (dudes under the age of 35), a number that outranked every single thing that aired on the big four broadcast networks — including that aforementioned excellent episode of Community.

This is no fluke, as Rick and Morty is pretty excellent itself. Community has always had cartoonish tendencies, but now, freed from draggy reality, Harmon is able to indulge his most outré fantasies: The pilot opens with a hammered Rick threatening to drop a neutrino bomb on the quiet suburbs below, annihilating all of humanity except for Jessica, the classmate on whom the terrified Morty has a crush. Later in the episode, during an interdimensional field trip gone awry, Morty is forced to smuggle magical, watermelon-size seeds by cramming them up his ass. A bully is frozen and shattered with an ice ray. Smoke from an alien bong becomes sentient, ages, and dies in a matter of seconds. Through it all, Rick is self-absorbed, bitter, vengeful, and gassy. He’s Lex Luthor on Lipitor, a degenerate Doctor Who.

Though Roiland is an equal partner — perhaps more than that; he provides the voices for both titular characters — the friction of the show is pure Harmon: Rick’s mortal enemy isn’t ignorance or the laser-toting cricket people who police certain cross-dimensional gateways. It’s mundanity. Morty’s parents (played with droll sincerity by Chris Parnell and Sarah Chalke) are so consumed with quotidian pettiness like breakfast and open-heart horse surgery that they’re completely blind to the extremes of imagination, possibility, and insanity that surround them. Rick and Morty, like Community before it, isn’t an overtly sentimental show. It slobbers, humps your leg, occasionally even vomits on you. But its extremes are just another way of showing you how much Harmon cares. It’s a feeling that, slowly but surely, appears to be reciprocated. Maybe it’s the giant magical seeds talking, but the famously self-loathing Harmon’s streak of not losing is starting to look suspiciously like winning.

A Look Inside Stanley Kubrick's Annotated Copy of 'The Shining'