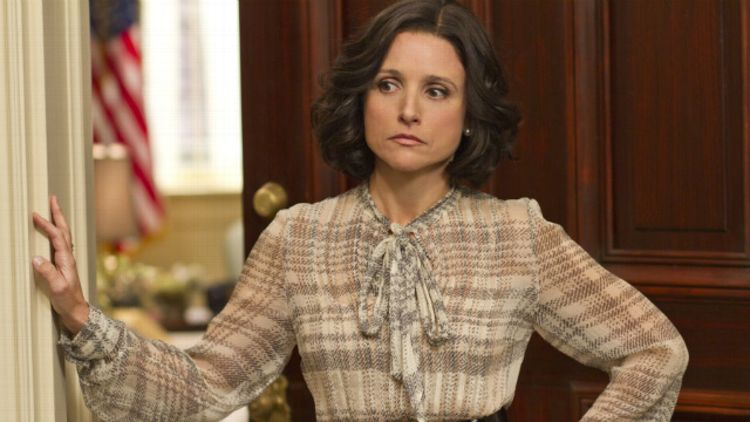 Julia Louis-Dreyfus doesn’t need to be doing this. At 51, the multiple-Emmy Award winner already has a career-defining — and children-inheritance-guaranteeing — run on Seinfeld as the bisque-mentioning Elaine Benes under her belt. In recent years, Louis-Dreyfus has mixed comic professionalism (a five-season run on CBS’s The New Adventures of Old Christine) with detours into hipster-approved hilarity (guest turns on Arrested Development, 30 Rock, and, most memorably, as herself on Curb Your Enthusiasm). Now she’s taken her talents to HBO, starring in Veep, the first American offering from culty Scottish satirist Armando Iannucci, the man who turned Steve Coogan into Alan Partridge and created Malcolm Tucker, the poetically profane political adviser at the center of a successful TV series (BBC’s The Thick of It) and crossover film (2009’s In the Loop). Louis-Dreyfus plays Selina Meyer, the country’s first female vice president, and a scheming stress ball who manages to offend entire swaths of the population while apologizing to another. On the phone from Los Angeles, the self-described “worker bee” was friendly, professional, and surprisingly giddy when complimented.

First off, congratulations on the show. It’s hilarious.

Yay! That is heaven.

Have you not gotten any feedback? You sound very excited!

It’s just starting to come, but I’m a nervous nellie. Frankly, I put my heart and soul into this and whenever you do that you get anxious. So if I get any positive feedback I’m delighted.

How did Veep come about? Were you actively searching for a new project? When you’ve had the success that you’ve had, I imagine you can bide your time a bit.

Oh, I was eager to get back up on the bike or the horse or whatever that expression is. Conceptually this was pitched to me only as “an unhappy vice president.” That immediately piqued my interest. There wasn’t even a script at that point.

It’s funny that “unhappy vice president” jumped out at you. Has there ever been a happy one?

The reality is, nobody who’s an ambitious politician ever aspires to the vice presidency. And therein lies all the comedy of the show. The position is so close to power and yet so far.

The new volume of Lyndon Johnson’s biography pretty much suggests that the day JFK was assassinated was, in a sick way, the best day of LBJ’s life.

The line I love to quote is from one of Franklin Roosevelt’s vice presidents — he had three. It was Garner. He was famous for saying the vice presidency is not worth a bucket of warm piss. Apparently he relayed that to Lyndon Johnson. Sometimes I think A Bucket of Warm Piss might have been a good title for the show.

Well, you’re on HBO, so it’s possible. Were you familiar with Armando’s work before this?

I was familiar with In the Loop — I had seen that when it came out and I loved it. It’s a treat to work with Armando because he’s a real genius, but he’s also incredibly collaborative. It’s a wonderful cocktail of qualities.

Since you met before the script was written, how much were you able to bring to the character of Selina?

Well, there’s a great deal of improvisation done on this show. All in an effort to make the viewer feel almost subconsciously like they’re a fly on the wall of the political process. Hopefully it’s somewhat tantalizing. You’re seeing what you shouldn’t see.

Wait, I’m surprised to hear you talk about improvisation. Because what struck me about the show was how incredibly precise it seemed. Everything, from the movements to the intensely wordy and quick dialogue, seemed choreographed like a ballet.

I’m not suggesting the scripts aren’t written. They are. So when I say there’s improv, I mean there’s a couple of layers of improv. We had six weeks of rehearsal together before we shot a single frame. And when we found things in that process then the writers locked them down. But even then, Armando likes to shoot in such a way that loosens it up. Things happen in character that very often makes it to the final cut. Like that hideous explosion in the pilot when Selina uses a horrible word I won’t repeat now.

The show is extremely British in its comedy — the pace, the verbal gymnastics — and that’s not something that often survives the transatlantic voyage. I’m thinking specifically of the pilot of the American Office, which used the original script but fell flat.

I can’t really speak to that. All I can say is that our goal was to make it seem as authentic as possible while being funny. We had a premiere type of thing last week in D.C. and New York and it was really interesting to hear how the audience reacted, particularly for me. I’ve had so much experience doing multicamera shows, and in those you are taught to hold for a laugh. Or even on single-camera shows, there’s an understanding as you shoot that there will be a laugh so there’s a mini-hold. But when I was watching this and people were laughing — and of course I’m delighted they were laughing — at the same time I’m thinking, Wait, wait! You’re missing what’s coming! But it’s fun because I think you can watch the show multiple times and find new stuff in it, which is kind of akin to the process of rehearsing and shooting it. The more we did, the more we found within it. Which is just delicious.

You are constantly moving in every scene of Veep. Was it more physically demanding than other shows you’ve worked on?

Yeah, there were some long days. But that was fine with me. I’m a homebody and a complete baby when it comes to leaving home, so the fact that we were on location and I was kept busy was great. Because I would have just gone absolutely ballistic if I had been sitting around with nothing to do.

In many ways this show is the anti–West Wing, portraying Washington as a company town fueled by gossip and backstabbing. You grew up in the area. Do you recognize your hometown at all?

I was outside of it. My family was not a political family. But I did go to school with the children of politicians. Susan Ford, Gerald’s daughter, went to my school and we had Secret Service on campus. She was older than me, so unfortunately I didn’t get to go to the prom that year because it was at the White House. But she always had Secret Service with her, and on Halloween she dressed up as Goldilocks and dressed them up as the three bears! Security is much tighter now than it was then, so I’m not sure if the Obama girls could get away with it.

But you went back to D.C. in order to research the role?

I did. The thing you are fundamentally struck by is how human and real and flawed things are behind the veil. Behind this Georgian façade is a bunch of papers and Frito bags left opened and desks that don’t match chairs. It’s not what you think it might be.

And did you observe the same kind of intensely interdependent relationships between politicians and their staffs that exists with Selina and her crew?

Oh yeah. Certain Senate relationships in particular. I remember one staffer telling me she sleeps with her BlackBerry on the pillow next to her head. She said it proudly.

Ten years ago you were filming Watching Ellie, an NBC sitcom with Steve Carell that was canceled because it was “only” averaging 8 million viewers a week. These days any network would kill for numbers like that. Do you still keep track of the fortunes of your former network home? And are you relieved to be removed from it all at HBO?

Well, it’s a dream come true for me to be doing a show with HBO and I hope we’re lucky enough to go for awhile. It’s a different universe. Obviously you have flexibility and latitude in ways you wouldn’t — you can’t — have on network television, and it goes well beyond being able to swear. There’s a culture of respect for the process and the vision of the artist behind the project that is remarkable to me. I mentioned, we rehearsed for six weeks before we shot eight episodes. That’s unheard of. And it was not inexpensive, by any stretch of the imagination. They let you do your thing and they respect it. As opposed to getting in the middle of it and trying to fix every little thing they perceive to be a problem.

I realize I sound like a major suck-up, but it is the truth. As far as the land of network television, I don’t really pay attention. Do you mean, do I follow the numbers game at NBC?

That and just the changing landscape in general over there. By moving to HBO now you’re freed from the falling ratings, which have, in turn, affected NBC’s ability to really invest and develop shows. Watching Ellie today would be the highest-rated comedy on their air by a factor of two to one.

Have you had a chance to watch your companion show on Sunday nights, Girls?

I’ve seen the pilot and I loved it. It’s hilarious.

As a woman who’s been involved in the world of comedy for as long as you have, I was wondering about your reaction to the heated backlash it’s received from some corners. It still seems to be the case that any time there’s a female-fronted comedy — be it Girls or Bridemaids — it ends up having to bear the burden of representing an entire gender.

I know. Isn’t it silly? We just have to keep making more and more comedies and eventually that notion will dry up and go away. I hope so anyway.

A friend of mine referred to Malcolm Tucker, the lead character from The Thick of It, as “the poet laureate of the F-bomb.” Selina isn’t quite there yet. But do you have a favorite of the many swears you’ve delivered in this first season?

You know, I still get swoony for “motherfucker.” But I also like “busting my ladyballs.” That’s awfully fun to say too.

It certainly seems as if you were having the time of your life cursing like this.

Oh, god. It’s just a dream. Or shall I say, it’s a motherfucking dream.

YouTube HOF: A Nine-Pack of 2Pac, With Zero Hologram Videos!

The Brave New Swearing, Cage-Fighting, Science-Craving World of Amish: Out of Order