A Two-Sided Affair With ‘The Affair’ 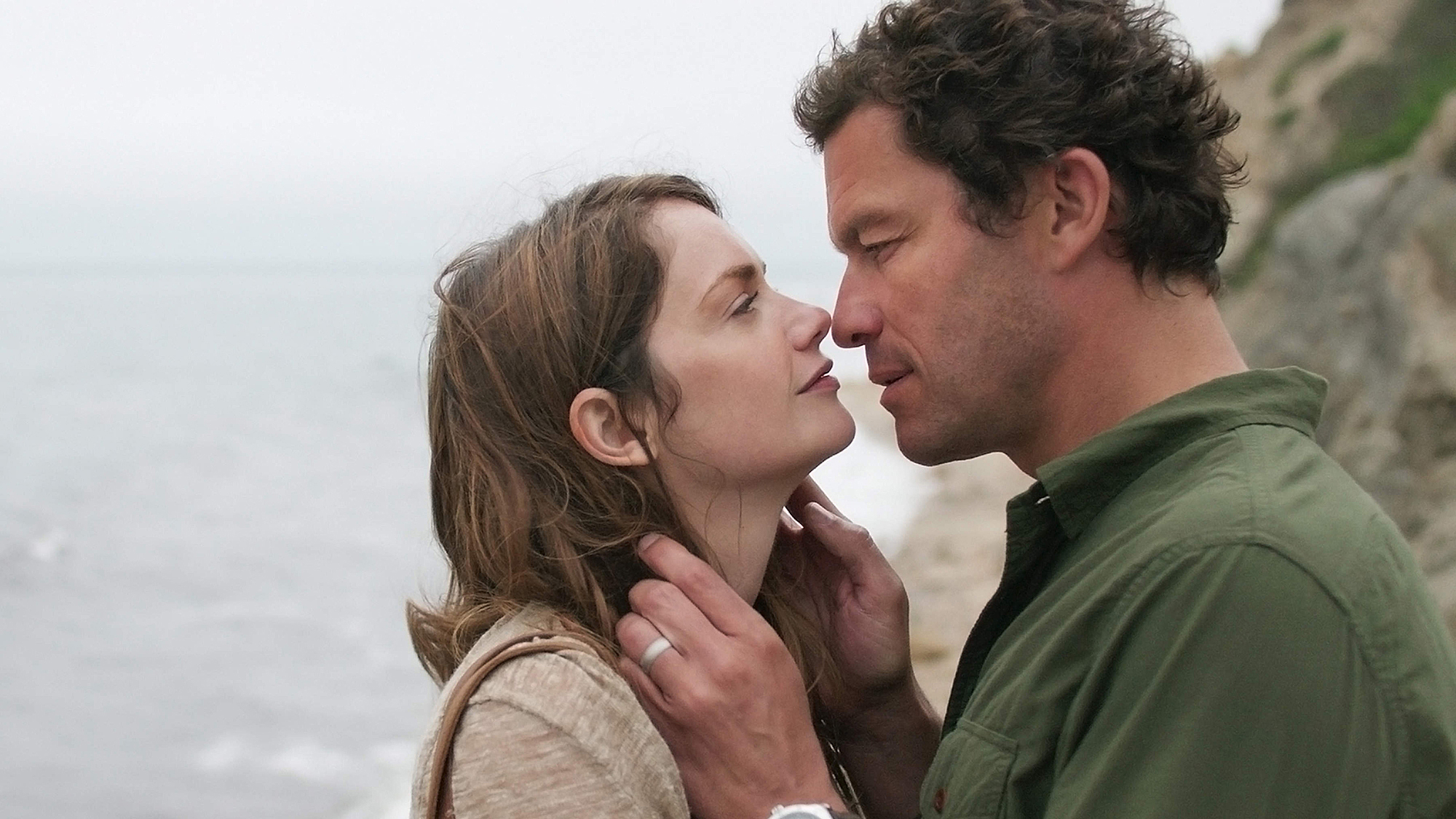 The Affair follows the evolution of the torrid extramarital relationship between Noah (Dominic West) and Alison (Ruth Wilson), and its effect on their spouses, Helen (Maura Tierney) and Cole (Joshua Jackson) … but with a twist: Each episode is split between the accounts of each lover as they are interrogated about a murder. This two-part structure allows The Affair to explore the gap between their recollections of events and the fragility of human memory. But The Affair has some perceptual issues of its own. This is The Affair, reviewed in the style of The Affair.

Oh, look, Eric logged into the Showtime PR website, hungry for more of The Affair, unable to stay away. It’s almost a week before the episodes airs — he just couldn’t wait until Sunday, I guess. I don’t blame him. I’m sexy, edgy, and mysterious. I’ve got intrigue, complex family drama, and a bunch of actors from The Wire. He loves that show!

I’ll start him off with a little romantic interlude between my heroes, Noah and Alison. There is such undeniable attraction and sizzling chemistry between Dominic West and Ruth Wilson. Look how surprised he is that they’ve enthusiastically resumed their relationship, just one episode after trying to go back to their respective spouses! Look how different the sex appears in their respective memories! He loves how twisty I can be with the depths of the human heart.

See, my secret is that I’m about all kinds of love. I ask all sorts of questions that no one has ever asked. Is love the creative inspiration for Noah’s novels? Does it come from people spending their lives together, like Noah and Helen? Can people control it, or do they just have to let it take them away like a raging ocean? These are all new, fascinating ways of thinking about the subject, so I’d better have Noah talk to a college class about it, just to make sure Eric really “gets” what I’m doing here. Does he know I got nominated for a Golden Globe?

Alison and Noah are mostly apart for this episode — I’ve already got him excited about the way I display the fallibility of human memory, so now I can really expand my storytelling a bit, as I get closer to the juicy murder mystery that he definitely needs an answer to. I already told him that Cole’s brother Scott is the one who dies, and now he knows that a car was the murder weapon, because of Detective Jeffries questioning Noah. He even trips up Noah with the gender of his children! Man, my framing device is so great.

And now, going into the finale, Noah has a good reason to kill Scott, because, zing — baby twist! I showed Eric a pregnancy test in the garbage at Noah’s house, during Alison’s half of the episode. He thought it was his wife’s, but it actually belonged to Noah’s daughter Whitney, so that there are even more people boning, just offscreen. And the baby daddy is the guy who dies. My framing device is so good at dispensing information. We’ve got him on the hook for the finale now.

Look at how well I’m showing off my supporting cast — tastefully, of course. After all, I’m airing on the network that brought you Weeds. Oscar, one of the most loutish, frustrating characters for most of the season, actually gets to be good, showing some empathy to Alison after harassing her. And Cole’s mother really twists the knife in, blaming Alison for her son’s death. It’s almost like all of these characters have their own stories to tell.

Wow, he’s stopping to take a break — he can barely handle us. He’s probably trying to digest all the great lines, like when Noah tells his friend Max, “This isn’t some midlife crisis,” and it’s totally ironic because it might be. Or when a guy jumps off a building near Max’s apartment, and a cop on the scene tells Noah, “It’s not that hard, buddy. Just make a choice.” I mean, wow. I am so well written.

He can’t wait to come back for more.

Oh, the new episode of The Affair is up on the Showtime website? I guess I’ll watch it now, since it’s pretty early in the week. I mean, I’m not going to spend time on this on a Sunday. Not when I have Bob’s Burgers, Brooklyn Nine-Nine, and The Comeback to get through. Hell, even that Benghazi stuff on Homeland is more fun than this, and Homeland Twitter is ridiculous.

They’re going to have a lot of sex? That’s cool, I guess. I get it. Ruth Wilson and Dominic West are attractive people. This is a prestige drama. On a network that can show all sorts of lurid stuff. And they’re good actors, some of whom were on a show I like. But I gotta admit, I stopped getting giddy at seeing McNulty and Rawls share scenes after, like, Episode 3.

Don’t get me wrong — Episode 9 is pretty good. It’s nice that, after the first few minutes of each of their stories, Noah and Alison are separated. It allows the show to cast a bit of a wider net and check in with more characters, both in Manhattan and Montauk. Mare Winningham is doing some pretty excellent, understated work as Cole’s secretly ice-cold mother, and she’s just tearing into Alison, which is making all the time they spent on her son seem worthwhile. And, uh, the guy who dies at the end knocked up Noah’s daughter, who hasn’t really had a story line because her father has been ignoring her? That’s kinda twisty.

But it’s also a bit self-defeating. Either The Affair can focus tightly on its leads and wring more out of its premise, or expand its world and lean into its soapier instincts. I don’t have any problems with soap, and this show does it well sometimes, but most of these characters just run together. It doesn’t help that they just keep hammering the point home. Yeah, love is complicated, sure. Maybe I’ll go listen to some Bon Iver? Noah tells Alison, “You need some fucking faith,” but I’m with her. Sorry, show — I wish I had some! When Helen (use Maura Tierney better, show) tells Noah to get the fuck out, it’s the most exciting moment of the series so far, because by now we know that he sucks.

I mean, God, Noah is such a dick. It’s almost more annoying that he keeps going back and forth on whether he’s really in love with Alison. Sure, on one hand, he’s in uncharted territory and doesn’t know what he wants. But do I have to watch it? This is the guy whose problems I’m supposed to be invested in? A successful novelist, who needs to destroy his family to write, and gets pushed back toward his lover by his even more successful novelist father-in-law? I think I’m going to take a break and go on Gchat for awhile; there are people I haven’t complained to about last week’s Newsroom.

And hey, Noah shows up at the train station just as Alison and Cole are supposed to leave! She has to make a choice, or something? It’s nifty that the show’s structure lets it play around with the way it doles out information, though it could do that anyway without having it built into the nature of the show. And it’s nifty that The Affair’s structure can interrogate the space between individual minds and the way those minds experience the world, as manifested by divergent memory, in a way visually concrete media rarely can.

But why does it have to be about this? Two reasonably well-off (give or take Cole’s family and their variably valuable ranch) people banging for some reason? Something, anything else with this split perspective would be vastly more engaging and far more rewarding of my time and emotional investment. And why does it have to justify that structure with these dumb police interrogations? The cop character is great, but it’s a little too reminiscent of Damages, without Glenn Close. I’m just not nearly as invested in the “mystery” as the show thinks I am.

I’ll watch the finale, I guess?