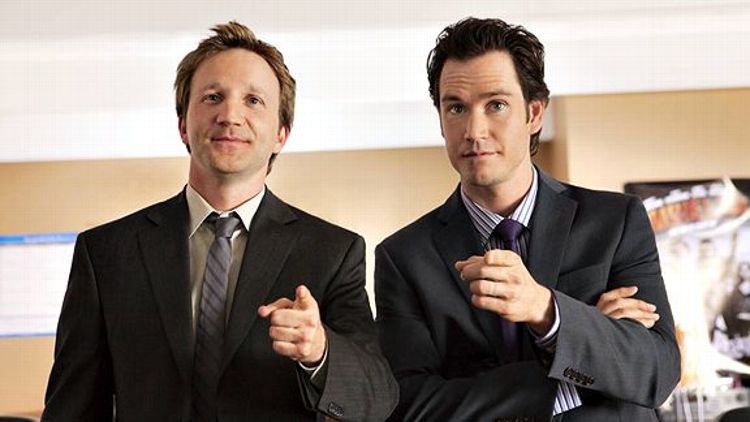 Every spring, during the NBA playoffs, TNT unleashes an unholy advertising blitz for one of its original shows. It’s effectively a tax on NBA fans; you can watch Postseason LeBron, but only if you sit through so many Memphis Beat promos that Jason Lee haunts your dreams. This spring’s tax was Franklin & Bash, TNT’s new legal comedy starring Mark-Paul Gosselaar and Breckin Meyer. A few weeks ago, I volunteered to review the first few episodes from a lawyer’s perspective for Grantland. I quickly regretted this.

The premise is straightforward enough. Jared Franklin (Meyer) and Peter Bash (Gosselaar) are frat-tastic ambulance-chasers operating a small law firm out of their man-cave office, a converted basement stocked with a full bar, hot tub, and scantily clad extras. Their unorthodox methods catch the eye of Stanton Infeld (Malcolm McDowell), the eccentric managing partner of Infeld Daniels, a prestigious Los Angeles law firm. Infeld brings them on board and hilarity ensues. Except it doesn’t.

In honor of tonight’s sixth episode, I put on a powdered wig, banged a gavel, and powered through the first five. Below is everything any sane person missed.

Plot: An airline represented by Infeld Daniels attempts to escape liability for passengers’ injuries sustained during an emergency landing by pinning the whole thing on the pilot.

0:06: In our first courtroom scene, Meyer orders a female witness to strip as she testifies. The judge holds him in contempt, but the gambit works. They win the case, and Malcolm McDowell, seated in the gallery, is so impressed by the duo’s innovative lawyering that he offers Franklin and Bash jobs at his firm. This is going to be the longest five hours of my life.

0:08: Random observation: Gosselaar is like a more convincing Paul Walker, but with less gravitas than James Van Der Beek.

0:30: The 4’6″ (approximately) Meyer deadpans to the leggy Garcelle Beauvais, “I don’t shadow. I cast shadows,” while conveniently standing three steps above her on a staircase.

Episode 2: “She Came Upstairs To Kill Me”

Subplot: Meyer represents Biff from Back to the Future in a civil case concerning … honestly, I have no idea. I refuse to rewind this show under any circumstances.

0:10: Malcolm McDowell gives a borderline-senile opening argument in a murder trial, causing Gosselaar to do a “Whoa, this guy’s a genius” eyebrow raise. Unfrozen Caveman Lawyer was a more realistic attorney than everyone in this courtroom combined.

0:18: Natalie Zea is the only thing keeping me from throwing a grenade at my television. Following Justified with Franklin & Bash must be like returning from Mars to jump on a moonwalk at an 8-year old’s birthday party.

0:19: Natalie Zea and her late husband’s safe word was “Cantaloupe.”

0:31: Gosselaar’s and Meyer’s sassy black assistant Carmen randomly ninja-attacks a David Cross look-alike, forces him to admit to jury-tampering, and mentions she’s a convicted felon for approximately the forty-eighth time in 1.5 episodes. Franklin & Bash is totally subtle and non-racist.

0:37: As Fred Willard (guest starring as every Fred Willard character ever) does Fred Willard-y things on the witness stand, Gosselaar accuses him of wanting to “tap the booty,” then, following an objection, tells the judge, “booty withdrawn.” You win, Franklin & Bash. CANTELOUPE!

Plot: A receptionist (Jillian from Comedy Central’s underrated Workaholics) sues a men’s magazine for wrongful termination, alleging she was fired for being too attractive.

Subplot: Gosselaar and Meyer’s friend is persona non grata in Chinatown because Dr. Chang from Lost posted a sign in his store alleging that he’d stuffed a frozen rabbit down his pants. The Dharma Initiative made more sense than this nonsense.

0:40: While she’s on the witness stand, Gosselaar seduces his delusional client by asking if she’s hungry, thereby winning over all the female jurors. If that sounds reasonable to you, congratulations: you’re insane.

0:50: The receptionist gets her job back and the friend clears his name in Chinatown. I’m going to move on and pretend this episode never happened.

Subplot: Gosselaar’s and Meyer’s high-school classmate (known as “Double D”) is charged with DUI based on security footage of him driving a golf cart from his grandmother’s retirement home to a strip club. I think. It’s possible I hallucinated this.

Plausibility: I no longer care.

0:04: Carmen the ex-con roundhouse kicks a bottle off Pindar’s head. Sure, why not.

0:16: Pindar develops a crush on Nanette from the retirement home based on their mutual hatred of birds.

0:44: The power couple reconcile their differences after the husband admits that their argument stemmed from a misunderstanding about his impotence. I did not realize this was a Cialis commercial.

0:50: Meyer vomits, either from drinking beer in court or realizing that he’s co-starring in Franklin & Bash.

Plot: The man who caught Kirk Gibson’s home-run ball from Game 1 of the 1988 World Series is sued by his two sons, both of whom are represented by Meyer’s super-lawyer dad (Beau Bridges).

Subplot: Something involving Tom Arnold and a reality show.

Plausibility: A surprising 6 gavels out of 10.

0:04: The opening scene was actually sort of clever. They sucked me in with the Gibson plotline. The dialogue was sharp, and Meyer and Gosselaar sold the scene from start to finish. Is this even the same show? What is going on?

0:15: Meyer: “[My dad] wouldn’t let me watch Walker, Texas Ranger because it made a mockery of the law.” Touché. Seriously: WHAT IN GOD’S NAME IS GOING ON HERE?!!!

0:30: Meyer cracks the case by turning the sons against each other over the fate of their childhood pet turtle, “Shelley.” Welcome back, Franklin & Bash. That got weird for a second.

0:51: Meyer’s dad: “Sometimes leaving a game early is what good lawyers do.” I have no idea what the hell this means, but it seems like a perfect cue to wrap things up.