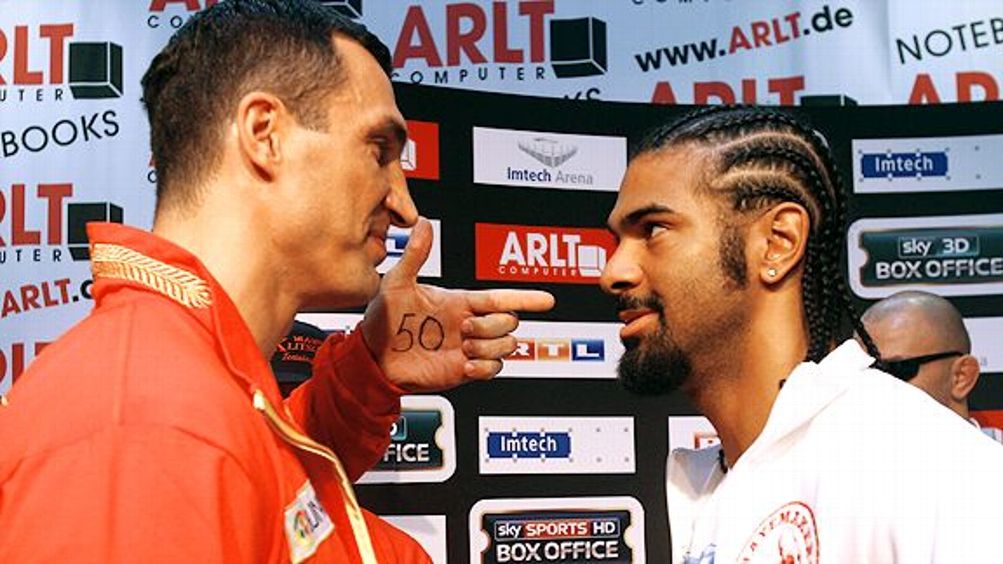 Wladimir Klitschko is the heavyweight champion of the world, a title that used to be all you needed to rank among the most famous people on the planet. He’s won 13 straight fights — 10 by knockout — and he’s been the king of his weight class for five years. But to those who don’t follow boxing, his name is at best vaguely familiar. Many Americans only know the towering Ukrainian because they’ve seen him in gossip rags with his ex, Hayden Panettiere; or they watched the episode of The Ellen DeGeneres Show on which the flyweight actress explained how a 5-foot-1 woman and a 6-foot-6 man can have sex.

Klitschko’s underwhelming Q-score is due partly to a generation-long swoon in boxing’s popularity, but also to what he has personally done to kill interest in the heavyweight division. It also doesn’t help that Klitschko has a brother, Vitali, who is similarly dominant in the ring and nearly indistinguishable from Wladimir to most casual sports fans.

On Saturday night in Hamburg, Germany, Klitschko will defend his championship against David Haye in the most hype-worthy heavyweight fight in nine years. You can interpret that superlative largely as an indictment of what’s become of the division. Nevertheless, this is a big fight. It’s almost a world-stops-spinning event in Europe, and on a July 4th weekend with little to watch besides midseason baseball, it’s a chance to convince American fans that they should care about boxing. Here’s what you need to know about Klitschko’s showdown with Haye.

What the hell happened to the heavyweight division?

The brothers Klitschko have ruled the heavyweight division since Lennox Lewis retired in 2003. Part of the problem — with U.S. audiences, at least — is that the Klitschkos aren’t American. Another problem is that so many heavyweight boxers have ruined the fun of super-slo-mo with their undulating man-boobs. The biggest problem, however, is the way Wladimir has elected to fight since suffering a pair of crushing knockout losses in 2003 and 2004. Klitschko’s modus operandi is to keep opponents away from his chin at all costs. He achieves this by jabbing, grabbing, and refusing to open up offensively until trainer Emanuel Steward has gone hoarse from screaming at Wladimir to finish his opponent.

In boxing, it’s not enough to win; you’re expected to entertain. But if you get knocked out trying to entertain, then you were stupid for not just fighting to win.

Wladimir’s cautious and effective style has won him 13 consecutive fights. Yet Klitschko’s refusal to use his full offensive arsenal has been utterly maddening. There’s nothing wrong with pitching like Jamie Moyer, but if Moyer had Randy Johnson’s fastball and still pitched like Jamie Moyer, you’d be annoyed, right? Klitschko’s fastball is so explosive that he ends a lot of fights early almost by accident, making him, somehow, a safety-first knockout artist. Unfortunately, it’s the “safety first” part that governs all but the final few seconds of his fights, and the resulting tedium eventually convinced HBO to slash heavyweight coverage. Saturday’s fight will be the first heavyweight title bout the network has aired in 18 months. Klitschko’s success in the ring may be unassailable, but the fact remains that his fights are usually a chore to watch.

So, seriously, which Klitschko is which?

Wladimir is 35 years old and stands 6-foot-6. Vitali is 39 and 6-foot-7. Wladimir holds two alphabet belts, The Ring magazine title, and calls himself “Dr. Steelhammer.” Vitali has one belt and goes by “Dr. Ironfist.” Wladimir recently broke up with a starlet. Vitali is married with kids. Wlad is a more athletic fighter with greater offensive variety and more technical skill. Vitali is awkward and ungainly but takes a better punch and possesses more of a killer instinct. If they ever fought, most boxing experts predict Vitali would win, but they’ve vowed never to meet in the ring, so forget about that. Vitali ran for public office in the Ukraine. Wladimir does magic tricks.

Who is David Haye?

Haye is a former cruiserweight champion who packed on 15 extra pounds, grabbed the one alpha-belt not held by the Klitschkos, and became a marketable challenger at a time when nobody else fits the bill. He’s British, like Lennox Lewis, but unlike Lewis he’s a small heavyweight with a big mouth. And, yes, that mouth earned Haye a shot at Klitschko more than anything he has done in the ring.

Haye declared Wladimir “solely responsible for killing the heavyweight division.” Haye also caused the Klitschkos great displeasure by wearing a T-shirt that depicted himself holding the decapitated heads of both brothers. When HBO analyst Max Kellerman asked Haye during a prefight interview why he hates Klitschko, Haye replied “because he’s clearly a dickhead” with Wlad sitting two feet away from him. If you close your eyes and listen to the fighters’ conversation with Kellerman, it sounds something like a debate between Ali G and Borat, especially when Klitschko refers to Haye’s jewelry as “flashy-flash.”

Is this fight going to make heavyweight boxing matter again?

If Klitschko wins in his usual style — pecking away from a distance, softening Haye up, and finally stopping him in the late rounds — then this fight does nothing but add a thin layer of padding to Klitschko’s Hall of Fame candidacy.

However, if Klitschko recognizes the fight as his opportunity to impress a wider audience, it could be a thriller. These are two talented, chiseled fighters with heavyweight punches and cruiserweight chins. Most boxing observers believe Haye will be in trouble the first time he gets hit with a power shot; it follows that his best chance to win is to land his own bombs before Klitschko can drill him.

Every few months boxing fans get their hopes up that one fight or another will return the sport to relevance, but it never turns out that way. If this trash-talking David upsets an uninspiring Goliath, that would provide a step forward for boxing. If said Goliath scores a sensational knockout in a dramatic fight, it would be a victory for HBO, the heavyweight division, and the Klitschko brand. It might even help to separate that brand into two distinct halves, with Wladimir standing an inch taller than Vitali for a change.