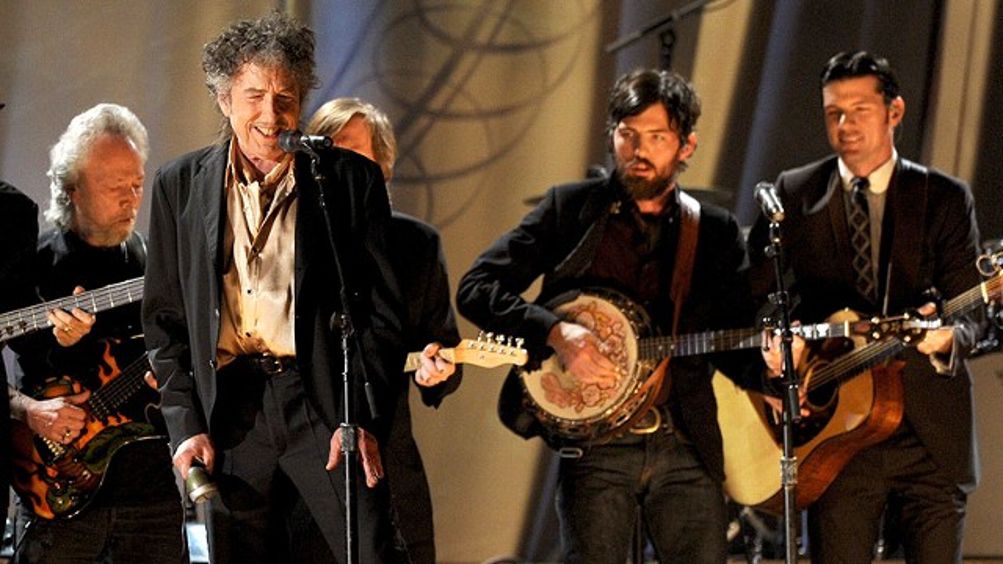 When the Grammys decided in 2011 to present an oddly themed tribute to acoustic music — which is sort of like the Oscars saluting the goodness of screenplays — there was little question which young musicians would participate. For North Carolina’s pop-bluegrass act the Avett Brothers and their British doppelgängers/usurpers Mumford & Sons, life itself is an earnest testimonial to the primacy of unpluggin’ it. Both bands share an aggressive showiness when it comes to demonstrating exactly how passionate they are about the hardscrabble authenticity of their organic instrumentation. They sing with the force and volume of a Baptist choir, and slash away at their guitar strings like a Mennonite version of Slayer. This jumpy, shouty gusto suits Mumford and the Avetts; plus, they look great — those black vests and bolo ties really bring out the sparkle in their eyes and the delicate shape of their cheekbones. They are, in other words, natural-born stars.

But they’re not Bob Dylan. That was abundantly clear during the Grammys segment, which began with Mumford and the Avetts playing one song each, and doing their respective our-hearts-are-bursting-out-of-our-chests shtick. Then Dylan sauntered in. And I do mean saunter; rarely has the word “saunter” been more appropriate to describe the lackadaisical nature of an entrance. If the opening acts played as if there were a rocket launcher pressed against their temples, Dylan approached the performance and its inherently ridiculous premise with as much reverence as it deserved. Not only did he come out without an acoustic guitar — kind of an important prop considering the circumstances — he did a light jog through a comically under-rehearsed “Maggie’s Farm,” the famously electric song that Dylan shoved in the faces of acoustic-fetishizing purists during his iconic Newport Folk Festival appearance 46 years earlier. This is why you can’t take Bob Dylan anywhere — you never know what he’ll do, though you can assume it won’t be boring.

The Avett Brothers and Bob Dylan have new albums out this week, and they both can be broadly described as albums about death, though they otherwise couldn’t be more different. For the Avetts, The Carpenter is another reach for a Big Theme, much as 2009’s I and Love and You was about you and us and love. Also like its predecessor, The Carpenter is produced by Rick Rubin and heavy on slick, sunset-serenading country-rock ballads that position the Avetts as this generation’s Eagles, or at least its Poco.1

On The Carpenter, the Avetts are searching for something true, like in the song “February Seven,” where Scott Avett just comes right out and says, “I went on the search for something true.” It’s an album that speaks of the great beyond in terms of maximizing our existence before we’re inevitably hurled into the uncertain blackness. “If I live the life I’m given / I won’t be scared to die” is the album’s key line, and it comes from the record’s best song, the very pretty and very corny “The Once and Future Carpenter.” If it’s possible to have negative amounts of guile, then the Avetts have filed for guile Chapter 11 with The Carpenter.

Then there’s Dylan’s Tempest. To quote world-famous death expert Walter White, comparing this record to the sweet but airheaded The Carpenter is like pitting grade-school T-ball against the New York Yankees. “The more I die, the more I live,” Dylan rasps on the Stones-y rocker “Pay in Blood,” and he’s not kidding — there’s an awful lot of dying (and living) on Tempest. The ungodly amounts of carnage Dylan describes going down in these 10 songs — between man and man, man and woman, man and nature, man and himself — don’t resemble the feel-good, life-affirming platitudes the Avetts set to pleasantly strummed melodies on The Carpenter. The truth Dylan sings about isn’t something you deliberately seek out; with any luck, you can stay one step ahead and keep it from dragging you into the unknown. For a little while, at least.

Death has been a constant in Dylan’s music, going back to his first album, when he recorded Blind Lemon Jefferson’s “See That My Grave Is Kept Clean” despite the fact that he looked like a neighborhood paperboy on the LP cover. But Tempest rivals 1997’s Time Out of Mind as the most death-obsessed record of his career. (I know I’m an “idiot” for thinking that, but still.) After two so-so records, 2006’s muted Modern Times and 2009’s shopworn Together Through Life, Tempest boasts at least one (and probably three) instant classics. The one undeniably great track is the nine-minute dirge “Tin Angel,” a riveting “Isis”–meets–Blood Simple tale of adultery, murder, and confounding loyalty with a shocking twist ending set to a hypnotic upright bass pulse and dreadfully insistent banjo jangle. It’s Dylan’s best story song since “Highlands,” and his most lucid narrative since “Hurricane.”

For all the hacky “he’s like a cow gurgling sulfuric acid!” descriptors that Dylan’s one-of-a-kind voice inspires these days, it’s not a stretch to suggest that he might finally sound to all of us like he’s always sounded in his own head. After a half-century of torturing his larynx, Dylan’s vocals signify the human spirit persevering in the midst of decay. He actually sounds like death now, though his nimble, playful singing style imbues it with the nagging stubbornness of life.

It’s that mix of profundity and loopiness that makes Tempest — despite being the year’s most morbid record not released by a metal band from Florida or Norway — so entertaining, even fun.2 Tempest is a blast musically, too, which hasn’t often been true of Dylan’s recent albums. The fast songs actually rock in a relatively contemporary, mid-to-late-ish 20th-century sense; even when Dylan is leaning on the familiar blues-band-isms of the sex-obsessed “Narrow Way.” (“I’m still hurtin’ from an arrow / That pierced my chest / I’m gonna have to take my head / And bury it between her breasts.”) And the slow songs mix in plenty of sweet with the sour, like the luminous country number “Soon After Midnight,” a stroll in the moonlight that nods to the carefree cornpone of Nashville Skyline.

After a half-century of torturing his larynx, Bob Dylan’s vocals signify the human spirit persevering in the midst of decay.

As for The Carpenter, I’m not completely immune to its relentless tear-jerking manipulations; as a new dad, I’d have to be made of swamp rats and asbestos not to respond warmly to “A Father’s First Spring.” The Avetts have their hearts in the right place when they sing about communing with lost loved ones over a weeping cello on “Through My Prayers” or pick out the most wistful banjo riff since “The Rainbow Connection” on “Live and Die.” But The Carpenter is just so hopelessly square, particularly when heard next to the 71-year-old weirdo they once backed at the Grammys. Once again, what the Avett Brothers treat as sacred, Dylan rightly sees as profane.

The most unpleasant live music experience I’ve had in recent years occurred in 2010 at Farm Aid in Milwaukee, when Dave Matthews performed a cover of Dylan’s “All Along the Watchtower” with frequent sidekick guitarist Tim Reynolds. At this point, I have no feelings about “Watchtower” one way or the other; it’s the one Dylan song that every semi-professional musician seems to know, though usually in the style of the Hendrix version. Dave Matthews played the Dave Matthews version — it’s long been one of his concert staples — which means there was a lot of mush-mouthed mewling and guttural grunting and constipated Church Lady facial tics. My problem is that it seemed to go on for 45 minutes.3 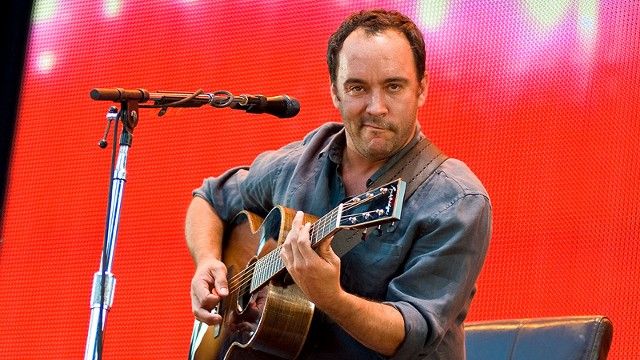 To be fair, the majority of the people in attendance — which numbered in the tens of thousands — absolutely loved Matthews that night, as crowds numbering in the tens of thousands tend to do with Matthews. He might be an annoying singer, an inartful songwriter, and an unexceptional recording artist, but Matthews’s prowess as a live entertainer cannot be questioned. Credit where credit is due: Going on nearly two decades, Matthews has been the most popular shed-rocker of our time. Nobody packs amphitheaters full of hemp necklaces and cargo shorts in the summertime with nearly the year-in, year-out reliability of the Dave Matthews Band. As far as a generation of bros is concerned, “All Along the Watchtower” might as well be his song.

I don’t begrudge Dave Matthews any of that. What I find objectionable on the new Away From the World is his pretentiousness. Matthews is OK when he sticks to the white-guy clumsy-funk of “Belly Belly Nice,” or the proggy meanderings of “Snow Outside,” which ends on an extended psychedelic coda that counts as the album’s most overpowering moment instrumentally. These are the things that the Dave Matthews Band does well: creating songs you can ignore while getting drunk at a parking-lot tailgate party, and spacey jams that should sound pretty decent in concert, post-parking lot tailgate party. What we don’t need from Matthews is social commentary. But social commentary is what Matthews delivers (backed by a children’s choir!) in the curiously sour “Gaucho,” where he implores us to “do much more than believe.” Can you be more specific, Dave? “So we got to get together,” he sings in the pensive “Mercy.” “War is the most vulgar madness,” he offers in “Broken Things.” Perhaps the song outlining Dave’s economic plan will be released as a B-side.

World was recorded after DMB spent the entirety of 2011 off the road, and the mostly downbeat and deflated final result suggests Matthews spent that time watching MSNBC and shaking his fist with Rachel Maddow. In interviews promoting the record, Matthews has openly expressed ambivalence about continuing as the figurehead of the world’s most ambivalently received superstar rock band. The quieter moments, like the middle-aged lament “Sweet” and the disarming love ditty “Belly Full,” are like holdovers from a different, Dylan-esque singer-songwriter record that may exist only in Matthews’s solo-artist fantasies.

As much as I hated my brief experience seeing Matthews live, at least he played with conviction. Away From the World feels like an afterthought, which makes the half-assed stabs at “meaning” all the more ineffectual. It reminds me of a lyric from Dylan’s “Long and Wasted Years,” a bitter beauty from Tempest with a mesmerizing descending guitar line: “My enemy crashed into the dust, stopped dead in his tracks, and he lost his lust.” The Dave Matthews Band and the Avett Brothers have crashed into the dust on their new records. But as odd Uncle Bob proves once again, it’s never too late to get your lust back.