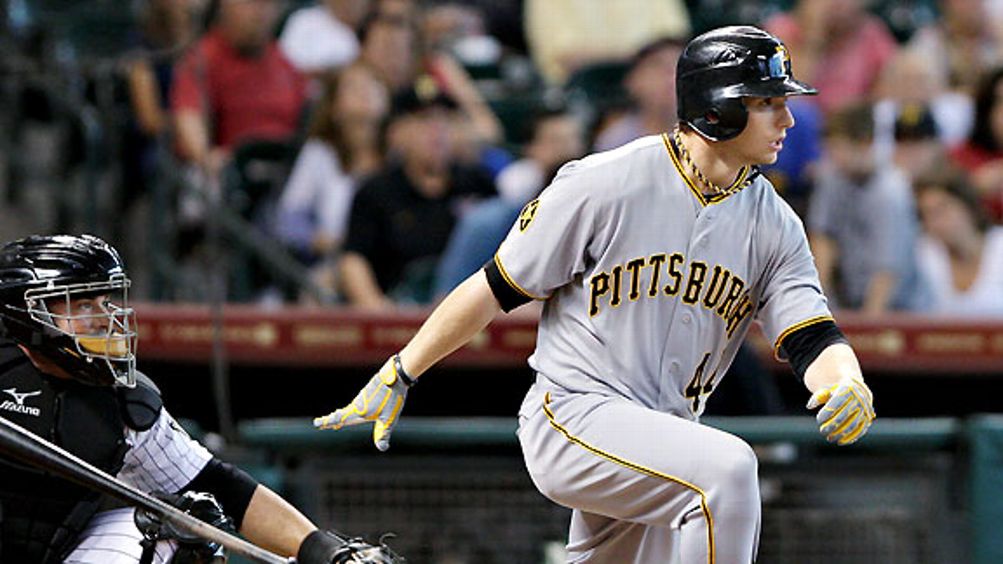 I watched a franchise die once. It was 1992, a warm October night in Atlanta. Francisco Cabrera struck the final blow, but he had accomplices. There was Pittsburgh Pirates ace Doug Drabek, who took a 2-0 lead into the bottom of the ninth inning and allowed a leadoff double. There was second baseman Jose Lind, who booted a routine groundball from the next batter. There was closer Stan Belinda, who relieved Drabek with the bases loaded and none out and gave up Cabrera’s walk-off single. There was even Barry Bonds, whose weak throw to home couldn’t catch up to Sid Bream — one of the slowest men in baseball.

I watched from my college dorm with my friend Vic, who had abandoned studying to watch his Pirates win the NL pennant after losing in the NLCS the two previous years. Instead, he watched as they were gunned down. After a moment of stunned silence, Vic turned to me for solace. “We’re not going to be back here next year, are we?” he asked. It was common knowledge that Bonds and Drabek were headed out of town as free agents. The immediate future in the Steel City looked bleak. “It’s going to be a few years,” I told him.

We’re at 18 years and counting.

The Pittsburgh Pirates are working on the longest streak of consecutive losing seasons in the history of the four major professional sports. Rather than rehashing what went wrong, it’s easier to talk about what went right: The Pirates moved into PNC Park for the 2001 season, and it continues to be part of any discussion about MLB’s best ballparks. (They christened their new home that year with 100 losses.)

And … that’s about it. The Pirates haven’t drafted well. Their owner forced them to take a safe college pitcher with the no. 1 overall pick in the 2002 draft, which is why they drafted Bryan Bullington instead of B.J. Upton. They rushed their players to the big leagues — 21-year-old outfielder Jose Guillen jumped straight from A-ball to their Opening Day lineup in 1997. Guillen was traded for bupkis two years later, and Pittsburgh was in his rear-view mirror by 2003, when he emerged as a middle-of-the-order threat.

That was the year the Pirates became the laughingstock of baseball. The Rule 5 draft is held every December to give teams with less talent on their rosters the opportunity to pilfer some from their wealthier brethren. It’s a chance for teams like the Pirates to acquire players, in other words. Only the Pirates did such a poor job of identifying their best prospects (and protecting them from the draft) that five of the first six players selected were taken from their own roster. By the fifth pick, there was open laughter in the draft room.1

The Pirates hit bottom in the summer of 2007. With the no. 4 pick in the amateur draft, they bypassed collegiate star Matt Wieters in favor of left-hander Daniel Moskos, who would sign for $3.5 million less. Wieters is in his third season as the Orioles’ starting catcher, while Moskos is trying to stick with the Pirates as a situational reliever. GM Dave Littlefield spent those savings and much more six weeks later, when he dealt two prospects to the Giants for veteran starter Matt Morris. Everyone in baseball could see the fork sticking out of Morris’ right arm — everyone but Littlefield, who agreed to pick up the $15 million remaining on Morris’ contract. Morris made 16 starts for the Pirates and had an ERA over 7 before being released the following April.

By then, Littlefield had been fired — with cause. New GM Neal Huntington has spent the past four years trying to rebuild the Pirates the way they should have been rebuilt all along — with patience. Every veteran player not nailed down was sent packing for prospects. The Pirates started to spend more money in the draft and in signing amateur talent from Latin America. The organization seemed headed in the right direction for the first time in two decades.

But the hole Huntington inherited was going to take years to climb out of. Even after 18 losing seasons, the Pirates were thought to be years away. If Hollywood had remade Major League last year, Rick Vaughn and Pedro Cerrano would probably have donned the black and yellow.

Maybe they have. How else to explain the 2011 season?

For the first three months of the season the Pirates played .500 ball, an astounding achievement for a team that lost 105 games last year. On June 28, the Pirates recalled an unheralded rookie outfielder named Alex Presley. Presley turns 26 next week; soon-to-be 26-year-old rookies are not supposed to be impact players. Presley hit a two-run homer in his first game, and the Pirates won, 7-6. Presley has kept hitting and the Pirates have kept winning. Presley had three hits Sunday, including an RBI single in the 11th inning. The Pirates won 7-5. He’s hitting .352/.405/.521, and the Pirates are 11-6 since Presley was called up.

In the NL Central, where teams play musical chairs with the division lead, that’s enough. After winning Friday night, the 48-43 Pirates found themselves ahead of St. Louis for first place.2 Pittsburgh dropped into a tie for second over the weekend, but Monday night Presley had two more hits and the Pirates shut out the Reds to move back into the lead, a half-game ahead of St. Louis and Milwaukee and four games ahead of Cincinnati in a four-team dogfight.

It’s not entirely clear how they’re doing this. Presley, a no-name rookie playing miles above his head, is the poster child for this team. The Pirates have one elite player, All-Star centerfielder Andrew McCutchen; he’s the only regular hitting over .275, or who has hit 10 homers or drawn more than 35 walks. The Pirates rank just 11th in the NL in runs scored.

The strength of the team is its pitching. They rank fourth in the National League in runs allowed. Based on who’s on the mound, that makes the Pirates a clear first in the majors in smoke and mirrors. Their rotation is a collection of soft-tossing finesse artists — the team ranks dead last in the NL in strikeouts — who are somehow getting guys out.

Paul Maholm, the ace of the staff, had a 5.10 ERA for the Pirates last year. He’s walking and striking out roughly the same number of batters this year, only now his ERA is 3.06. Kevin Correia had a 5.40 ERA last season for the Padres while pitching in a home ballpark so big it can be seen from outer space. In Pittsburgh, he has a 4.04 ERA and made his first All-Star team.3

Charlie Morton went 2-12 with a 7.57 ERA for Pittsburgh last year. He has since revamped his pitching mechanics to duplicate those of Roy Halladay. The makeover resembles Halladay in the same way the picture hanging in your accountant’s office looks like van Gogh’s “Starry Night,” but the results haven’t been half-bad. That replica isn’t worth nine figures, and the new Morton doesn’t pitch like Halladay — in 102 innings, Morton has allowed 110 hits and 40 walks. And yet he boasts a 3.62 ERA.

And then there is Jeff Karstens, who entered the season with a career record of 12-27 and an ERA over 5. So far, he’s not fooling anyone — in 108 innings, he has struck out just 60 batters, while surrendering 17 home runs. And yet he ranks second in the NL with a 2.34 ERA.

The Pirates’ success this season is a house of cards built on quicksand in the center of a mirage. They are 15-6 against the dregs of the National League, the Cubs and Astros, and 35-38 against everyone else. According to Baseball Prospectus, they have a 4 percent chance of making the playoffs.

And yet I still think they should go for it.

The question “What should the Pirates do?” has a Pavlovian response conditioned by years of losing: If it’s July, the Pirates need to be sellers. Trade any veteran with value for young players who might improve the team in the future. Rinse, lather, repeat.

The Pirates can’t do that this year. No matter how flimsy their record is, those wins and losses are in the bank, and no team can betray its fan base by throwing in the towel when they’re a half-game back. If they can’t be sellers, they might as well be buyers.

That’s particularly true because the youth movement they’ve been building since 2007 is still years away from reaching its potential. It doesn’t help that the Pirates’ top picks in 2008 and 2009, third baseman Pedro Alvarez and catcher Tony Sanchez, have both been disappointing as pros. The Pirates’ top three prospects, right-handers Jameson Taillon, Stetson Allie, and Luis Heredia, are all 20 years old or younger. Gerrit Cole, who was the no. 1 overall pick in this year’s draft and is expected to sign next month, might be the only impact player to debut with the Pirates between now and 2014.

Even if the Pirates were to hew to tradition and sell off their marketable players for prospects, Pittsburgh would still need everything to go right to be contenders in 2012 or 2013. They would need unexpectedly good performances from unheralded players, and they would need their NL Central rivals to underachieve. They would need a season, in other words, like the one they’re having right now.

The Pirates will have a better idea if they should be buyers or sellers soon enough. Monday’s win was the first of six straight games against the Reds and Cardinals. Then they’re looking at seven games against the Braves and Phillies leading up to the trade deadline. They could easily be six games out after that stretch, in which case they’ll probably feel comfortable auctioning off some veterans.

But if they can hang tough for the next two weeks, the Pirates need to be aggressive buyers. Their elite pitching prospects should be untouchable, but anyone else should be fair game if the Pirates can pick up a third baseman who can hit, a first baseman who can improve on Lyle Overbay’s .238 average and seven homers, or a starting pitcher whose deal with Beelzebub isn’t about to expire.

Sure, it’s unlikely that the Pirates will stay in the thick of the NL Central race for the next 70 games. But that’s nothing compared to how improbable it is that they’ve stayed in the race until now. Resurrecting a franchise often requires a miracle. The Pirates are more than halfway there.