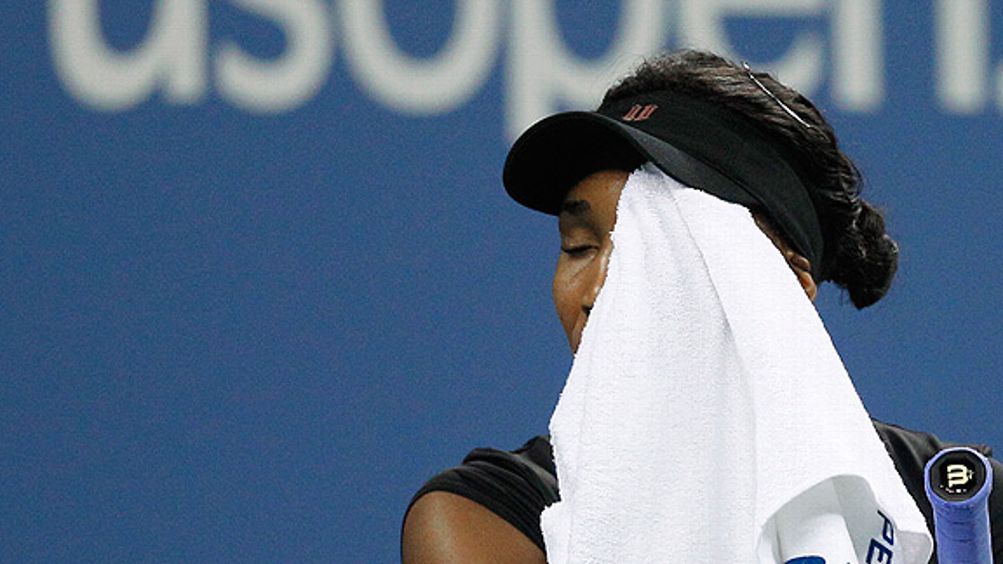 Since the start of the U.S. Open, Louisa Thomas has been writing about Venus Williams. Read Part 1 of her coverage here. For Part 2, click here.

And just like that, it was over. She was gone.

Shortly before Venus Williams’ second-round match against the 22nd seed, Sabine Lisicki, was set to begin at Arthur Ashe Stadium, the referee’s office announced that Venus had pulled out of the U.S. Open with an unspecified illness. The news was stunning. She had arrived at the USTA Billie Jean King National Tennis Center earlier in the day and had hit a few balls, and seemed to be preparing for her match. Venus had suffered from some sort of virus that left her drained and kept her from competing in tournaments since Wimbledon, but she had shown no signs of illness, only rust, during her first-round win over Vesna Dolonts. She seemed, if not fully there, then on the way.

On some level it wasn’t a surprise. How could it be? Venus is a vanishing act. I’m not sure if there’s ever been an athlete quite like her, someone who so completely represents the sport, and yet who also seems almost separate from the game, as if saving her energy for something else. It isn’t quite transcendence. It is more like ambivalence, occupying two spaces at once.

Not long after the official announcement of her withdrawal, Venus put out a statement saying that she had been diagnosed with Sjogren’s syndrome, an autoimmune disorder that causes fatigue and joint pain, among other ailments. I didn’t think Venus’ nagging injuries and her chronic exhaustion were explained by boredom or petulance or indifference. I never thought she was lying. But I did think her symptoms also suggested something else, some spiritual condition, and that it might be interesting to try to describe that spirit. Now this feels a little silly and sad. Watching Venus serve was only going to tell me so much about her body and her mind.

It’s not known how long Venus has had the disorder. Most people who get it are older than 40 (which makes Venus, for once, very young). Still, according to the Sjogren’s Syndrome Foundation, because the symptoms are easily confused with other conditions, it takes on average nearly seven years to receive a correct diagnosis. Earlier today, Venus’ mother, Oracene, told the New York Times‘ Karen Crouse that the condition was “something that’s been worrisome for a long time.” After Wimbledon in 2007, doctors informed Venus that she was anemic, but at the U.S. Open later that year she still appeared dizzy and weak. “After Defeat, Venus Is Tired But No One Knows Why,” read the headline of a story by the New York Observer‘s John Koblin. Was the problem Sjogren’s? For the moment, no one knows, except perhaps for Venus, her doctors, and her family.

Venus keeps things to herself. It’s been reported that even her agent was surprised by her decision to pull out. At the press conference after her first round, she was pressed to name the illness that had kept her out of tournaments since Wimbledon. “It’s outside of the press room, that name,” she replied. At the time I thought this was pretty coy and a little annoying, as if I had a right to know. I wonder now why she resisted saying what it was. For a competitive edge? Because it wasn’t our business? Because people would feel sorry for her? Maybe she just didn’t care what we thought. Wouldn’t be the first time. It was enough that her backhand was cranking, that she moved forward well, and that her serve was still one of the best in the women’s game.

But so is Sabine Lisicki’s. This match was going to be a tough one, and Lisicki was slightly favored, especially in light of Venus’ questionable health. This is Serena’s tournament to lose — not Venus’. I had planned to watch Venus for the whole Open, but I was all too aware that her “whole Open” might mean two rounds. Lisicki, a Wimbledon semifinalist, has struggled with injuries herself, but already the crack of her golden whip is legendary. Her nickname is actually Boom Boom.

During Wimbledon, Lisicki took out the French Open champion, Li Na, on the strength of her serve, blasting four incredible bombs when down 15-40, 3-5 in the third set. Afterward, I spent some time watching highlights of the German serving. But once inside the YouTube vortex, I found myself clicking through the links, looking for Venus. I was looking for the Ur-serve.

Because if Venus helped change the game, she started, fittingly, with the serve. No woman hit it faster — and not all the men did, either. Since the serve is the most American of strokes — self-reliant, fast, dictatorial — it helped her catch the country’s attention. How could it not? It isn’t just the speed that makes it so amazing. As thrilling as it is to see Venus move, there is something almost more striking about her preparation to toss a ball. It is a moment of calm, collection, and patience. She looks almost at peace. Then to see her reach her full height — completely flung out, the long height of her body and the length of her arm, the step of air under her feet, the way her racket seems to keep reaching even as it snaps around — her body generates so much power when she strikes a hanging ball.

Venus’ early exit will inevitably raise endless questions about the future of the women’s game, and especially of American tennis. For the moment, the latter seems in OK shape. The former is anyone’s guess. On Tuesday, the 16-year-old Madison Keys — born after Venus played her first pro tournament — looked impressive despite falling in three sets to Lucie Safarova. Another American teenager, Christine McHale, upset the no. 8 seed, Marion Bartoli. Coco Vandeweghe didn’t really challenge Samantha Stosur, but her own big serve was dazzling.

Will these kids be flashes in the pan or have a more solid future? It’s hard to answer; promising players have appeared before only to disappoint. It’s especially hard to answer, though, because no one knows who their competition will be in the long run. This year’s Australian Open champion (Kim Clijsters), French Open champion (Li Na), and Wimbledon champion (Petra Kvitova) were all out of the U.S. Open by the end of the first round. When focused and healthy, Serena so thoroughly dominates women’s tennis, it’s almost uncomfortable to consider. When people say this tournament is hers to lose, it’s partly because it’s hard to imagine anyone else could win.

For the rest of the U.S. Open, there will probably be some high-quality tennis on the women’s side, but the outcome will usually feel random. That’s why you so often hear that tennis needs Venus Williams, not just Serena — not just the Williams sisters. It isn’t just that Venus has such a familiar and reassuring figure. It isn’t, either, that she settles tennis’ unstable hierarchy. She hasn’t won the U.S. Open in a decade and hasn’t won a major title in three years.

But when she plays, you know the outcome won’t be random. She’ll win or she’ll lose. Even when she loses — and she loses, actually, a lot — the result will feel earned, either by her opponent’s brilliance or by Venus’ mistakes. It’s almost like it’s a natural state, like she couldn’t do anything about it even if she tried. It’s not just the way she plays, it’s also the way she walks, the set of her broad shoulders.

If Venus does not play again this year (and it’s hard to imagine she will), she will have played 11 matches in 2011. She has played in more than 700 matches in her career and is two wins away from 600 victories. Why does she keep playing? Maybe the answer is simple; maybe she plays because she can.

After her withdrawal was announced and tennis writers were going nuts on Twitter, someone pointed out that she might be out of the Open but she’s still enrolled at Indiana University, where she is studying business. Wednesday, that might have seemed like a sign of her lack of commitment. Now, it just seems like something good. So what if she plays when she wants to. It wasn’t always that way, after all. In the preface to the book of essays by business leaders, Come To Win, while extolling the virtues of dedication and hard work, Venus writes, “As a little girl I practiced no fewer than five hours a day, every single day of the year.” Then she added something telling: “The only time we got a break was when it rained, which is why, to this day, I still find rain comforting.”

This week started with a hurricane. I hope she found some comfort in the rain.