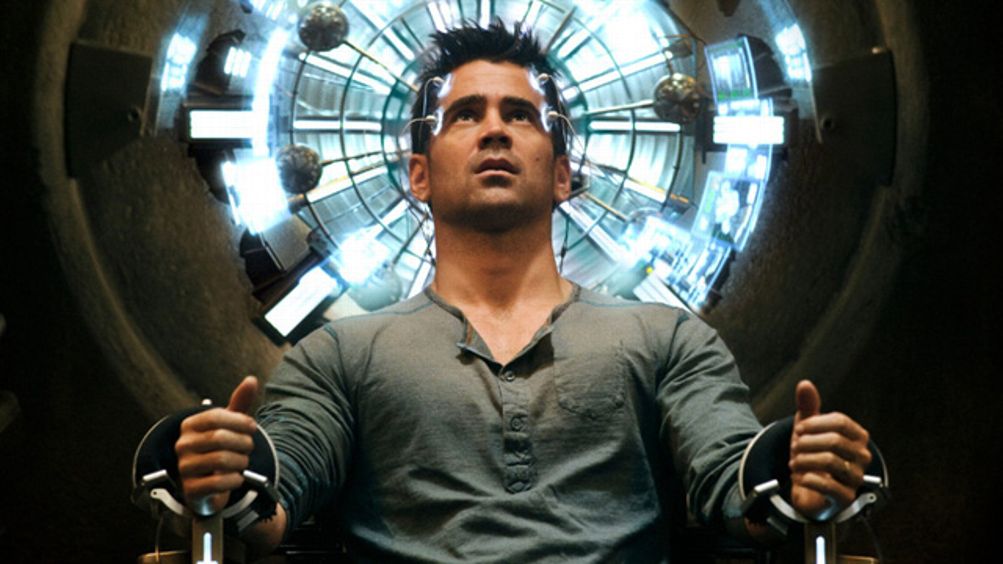 There’s a 1959 Philip K. Dick novel, Time Out of Joint, that opens with a man named Ragle Gumm idling around the suburbs in that typically ’50s-ish way. To earn money, he solves a puzzle in his local newspaper called “Where Will the Little Green Man Be Next?” Inexplicable, Philip K. Dick–type things start happening — for example, a soft-drink stand disappears, replaced by a slip of paper that reads SOFT-DRINK STAND. Life goes on like this for a while, until Gumm wakes up to the truth: It’s the late ’90s, not the late ’50s, there are rebel separatists on the moon, and Gumm has unique psychic powers; he can tell where the insurgents will strike next. While he thinks he’s been solving a newspaper puzzle, he’s actually been on the wrong side of a war, living in a comfortable dream, aiding the Earth’s warlords in their anti-lunar counterinsurgency.

So yeah, you could say Dick, who lived long enough to bless Blade Runner, Ridley Scott’s 1982 adaptation of his book Do Androids Dream of Electric Sheep? — though not long enough to actually see it — probably knew this was coming, the way that Hollywood would play “Where Will the Little Green Man Be Next?” with his work. After Blade Runner, there was the original 1990 Total Recall; Spielberg’s Minority Report; Paycheck, John Woo’s last traumatic venture into Hollywood; Richard Linklater’s appropriately odd A Scanner Darkly; Next, which marked Jessica Biel’s first but not final journey into the Dick universe (though it was probably her final journey into a universe where Nicolas Cage can see 120 seconds into the future); and the dutiful millinery documentary The Adjustment Bureau. The Truman Show was not an official adaptation of Time Out of Joint, but might as well have been. Now there’s Total Recall, again.

It is a distinctly Dick-like irony that this novelist — a paranoid “flipped-out freak” who wrote so well about the power of illusion to seduce and to sedate, who was suspicious of big corporations in all their shadowy forms, who thought the government was trying to suppress the random, skull-splitting acid truths he kept hitting upon in his fiction — has become one of the enduring muses of the modern Hollywood blockbuster. Dick’s dystopian, placeless future — a land free of the pesky regional specifics that perturb international audiences — is where many blockbusters are set these days. The author’s ability to envision things that haven’t been invented yet lends itself to directors who are looking to film spectacular things that audiences haven’t yet seen. His abiding sense of another, hidden world beneath our own decouples neatly, if entirely disingenuously, from the messy political particulars of whatever current moment we’re in.

Even Dick’s habit of going rogue in the third act — “We Can Remember It for You Wholesale,” the short story that is the source material for Total Recall, ends with the vision of a 9-year-old saving the world from a horde of field-mouse-size extraterrestrials — perfectly suits an industry that specializes in cleaning up the untidy ends of things.

So no wonder they remade Total Recall.

It’s not much of a remake. It lacks joy. It has that kind of all-black gothic pessimism that director Len Wiseman perfected unto moody boredom in his Underworld films — everyone here, from Colin Farrell to Bill Nighy to Kate Beckinsale, either yells or broods. Wiseman trades the original’s identity-is-a-ticking-time-bomb-of-an-illusion goofy panic for lots of running and new age platitudes — “I may not know who I was,” Farrell’s Quaid says, late in the film. “But I know who I am.”

The 1990 adaptation was directed by a Paul Verhoeven near the peak of his evil powers — his Total Recall had a dwarf stripper mowing down bad guys with a machine gun, a bursting-into-erotic-flame Sharon Stone, a revolting Ernest Borgnine–faced (RIP) mutant baby covered in chest hair, and Arnold Schwarzenegger, trying on existential bewilderment the way Rick Ross might try on a Speedo. The film, which was re-edited to avoid an X rating, drew the approbation of both Susan Faludi and the New York Times — one of the few times the words “three-breasted whore” and “hybrid hooker-commandos” would appear in the Paper of Record.

For a story that is all about ambiguity, the 2012 Total Recall doesn’t really have any. It’s a dutiful trip back through the previous film, minus Mars, the cross-dressing, and a sense of humor. Unless, I guess, you count all the times Farrell, his rebel girlfriend Biel, and his sham wife Beckinsale pun on their sham marriage:1 “Talk! Or we can skip straight to Till Death Do Us Part.”

Instead of Mars, Wiseman imagines a chemically ravaged Earth populated by two elevated cities, blocky and slum-dense. Terrorists are blowing up glide trains and agitating for better employment hours; in a nice proto-fascist touch, Farrell’s job has been updated from literal rock-breaking — recall Schwarzenegger as Quaid, woefully complaining about memories he can’t tell if he has or not, while driving a jackhammer into the ground — to welding breastplates onto robot-police body armor. In the red-light district, they blast dubstep — the Vangelis of our degraded time.

Wiseman’s camera starts tracing zany Spirographs around Farrell right around the moment his character starts killing people — this director stages action sequences in three or four wildly swerving dimensions, which is cool and borderline virtuosic until it’s confusing and loud. He films Beckinsale, one of the most underrated action heroines of the last decade, like she’s an avenging warrior goddess, or his beautiful real-life wife. (She is in fact both.)

But the movie is less than the sum of its wan parts — too staid and buttoned-up and traditional to work as sci-fi, not nearly detailed or deliberate enough to play as the self-murder mystery the campy original sort of was. It’s an action movie starring Colin Farrell. See In Bruges instead.

Beckinsale has suggested that her husband made Total Recall after trying and failing to get an original sci-fi movie of his own made, which is yet another Philip K. Dick kind of a story — a man, who wants only to share himself and his ideas with the world, must instead make Live Free or Die Hard. Hollywood’s enthusiasm for rebooting things is unremarkable and value-neutral until it’s not, and then something sinister starts to creep in, and you start thinking that somehow this is all familiar, and that perhaps none of this is actually real, that maybe we’re all being rebooted every day.

Which is a productive delusion, probably, for an industry that works on weeks like this one to gently rewrite our memories of things that never happened in the first place. In one of the more effective and disorienting callbacks to the original film, Wiseman restages the Arnold-arrives-on-Mars-in-drag scene, but with a decoy — this time around, Farrell isn’t the fat lady, he’s the guy in line at customs behind her. It’s a wink at the audience, which takes place in a different world than the one onscreen — it lets us know we’re dreaming, but not to the point at which we actually wake up. Reboots like Total Recall open up a strange, third dimension, where we watch real people and real careers get rebooted in real time, where we watch our own opinions change accordingly.

The 2012 Total Recall is a push of the reset button, not just for Colin Farrell, who returns to a leading role after a post-sex-tape-and–Miami Vice trip to supporting-actor rehab, but also Beckinsale, who has spent her career swinging between jagged little performances in films like Whit Stillman’s The Last Days of Disco and ludicrous, Hollywood fever-dream stuff like Van Helsing — she even survived Michael Bay, who cast her in Pearl Harbor despite the fact that, according to the maestro, “I didn’t want someone who was too beautiful.” After carving out a quiet, lucrative niche in her husband’s Underworld franchise, and what Wikipedia earnestly dubs a “focus on small-scale drama (2007–2011),” here she is again a star, one of the most dynamic and determined things you’ll ever see in motion.

And it pushes the button again on Dick, who has watched from a neon-colored cloud in the afterlife as the grit and speed-freak angles of his fiction — enthusiastically described, multicolored bare breasts; Martian “frog-pelt gray” suits; shrewish, undermining wives (Dick himself had five) — have been sanded down by guys like Wiseman into movies with no memorable characteristics at all.

Dick would’ve been interested in the money, surely. And he might have actually enjoyed following the eraser lines filmmakers have traced over his work, cutting first the third act, and then the second, crediting him with ideas he was too weird to actually have, until we’re left, as with the new Total Recall, with the featureless ghost of a ghost of a 17-page short story. In life, Dick tried and failed to get a screenplay of Ubik made — a project Michel Gondry may or may not be working on now. Ubik is a book about deterioration, reverse time travel, and regression. According to Dick’s pal, Tim Powers, Dick had a different ending in mind than the cryptic one found in the book. The movie would end with a “a series of reversions,” Powers wrote, “to black-and-white, then to the awkward jerkiness of very early movies, then to a crookedly jammed frame which proceeds to blacken, bubble, and melt away, leaving only the white glare of the projection bulb, which in turn deteriorates to leave the theater in darkness.” I’d see that one in a heartbeat.