How Chris Paul Fits in the Clippers Offense

Report From Manila: The Last Days of the Triangle Offense 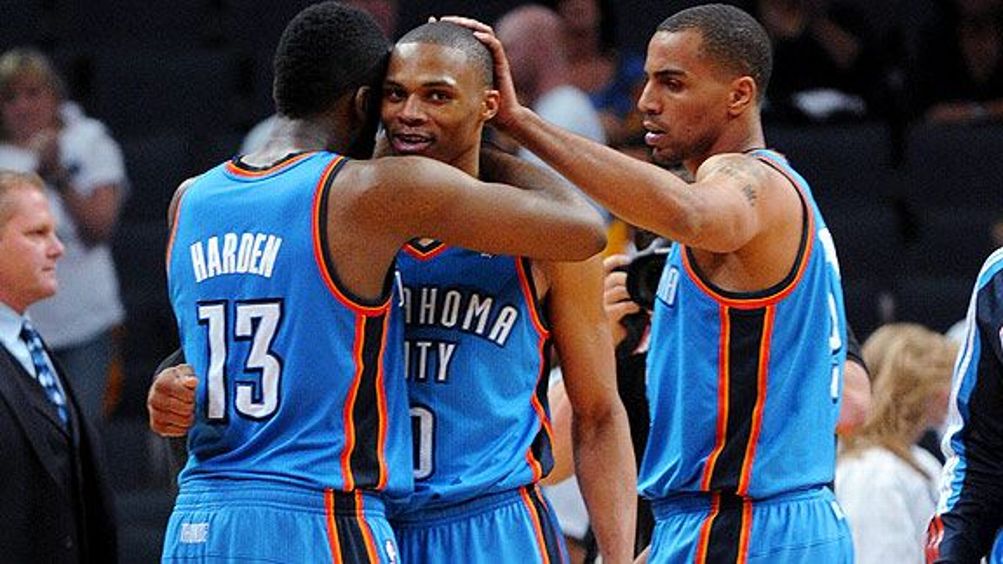 The glowing ball of love that is the Oklahoma City Thunder bounces into the fourth season of its existence with every possible reason to feel good. Feeling good, in fact, is practically the Thunder’s whole mission statement. Since riding into town on a rainbow in 2008,1 the Thunder have overachieved (they made the playoffs in their second season, when they pushed the eventual-champion Lakers to six games; they won the division in their third, losing to the eventual-champion Mavericks in the Western Conference finals) while charming the town, creating one of the best fan experiences in the NBA, and soaking up all the good publicity that goes with being the closest thing the league has to the anti-Heat. A likable young superstar who’s happy where he is! An inexpensively assembled roster2 of teammates who get along! I’d seen the Thunder play before, in Boston, but it wasn’t ’til I saw them in OKC last year that I really got this. There was an invitation folded over the back of my seat beckoning me to something called the Hospitality Room, which turned out to be a place where they were giving away chocolate-chip cookies. Giving away, as in, for free. As many as you wanted. At one point in the third quarter, starting on my 1,200th cookie while watching Kevin Durant sink some gloriously tipsy-slanty jump shot, I glanced at the scoreboard and thought, All this and they’re winning, too?

In a way, Oklahoma City is what happens when a team succeeds before it carries any real burden of history.3 The team has no hated rivals, no despised executives, no former players who’ve stabbed it in the back, nothing resembling bitterness or the sort of clogged sports hatred that helps the rest of us survive the winter. It’s basketball as if the world were new. This year — it almost goes without saying — everyone is back, everyone is healthy, almost everyone should have improved. The team has a new $14 million practice facility. It has Durant, basketball’s happy supernova, fresh from an offseason of Rucker Park glory and orgiastic PR. It has Russell Westbrook, the wild-eyed point guard with the (periodic, recurrent, not-totally-reliable) ability to take over down the stretch. It has the dawning pharaonic power of James Harden and his beard. It has the defensive strength of Serge Ibaka — who, awesomely, spent the lockout working on his post game with Real Madrid in Spain — and Kendrick Perkins. (Who spent the lockout getting arrested at a nightclub in Texas, but whatever. The charges were dismissed, and 8-to-1 he was just drunk on optimism.)

Sure, the team’s ball movement can be a little stiff, and its perimeter defense isn’t all-world, and Harden (12.2 ppg in 27 minutes last season) hasn’t quite proven he can be the third scorer behind Durant and Westbrook. The most urgent item on OKC’s December to-do list was to sign Daequan Cook to a two-year extension — not exactly the mark of a team that fears for its future. Even the compressed post-lockout schedule could work in the Thunder’s favor. All those back-to-back-to-backs are going to be a lot easier for OKC’s 23-year-old knees than for a Lakers team, some of whose players remember the Carter administration. The Mavericks are still the champs, but the Thunder have as much of a chance of winning 60 games and making the Finals this year as anyone.

Which, given that this is a franchise that was uprooted just four years ago, following a 20-62 season, and moved to a city without deep basketball roots, is pretty remarkable. I don’t know what would happen to the Thunder’s connection to the city if, say, they coughed up a losing season this year, or if one fateful morning Durant were to call up a radio station and say he wanted to play for the Knicks. I do know that Oklahoma City is head over heels so far, including fans I didn’t think the team could win over, dudes in black felt cowboy hats, the whole Calvin-peeing-on-rival-truck-logos set.4 I also know that every time I expect the other shoe to drop with this team, it somehow keeps not dropping.

It’s crazy. Feel-good stories in professional sports never feel good for this long. One of the consequences of 24/7 sports coverage on 300 channels and 20 million websites is that fans are intensely aware of the way every sports narrative plays out according to an invisible set of rules. And there’s an ironclad law — call it the Behind the Music Axiom — that collective contentment is impossible within successful groups. Egos start to wear on each other, or an ACL gets blown, or somebody gets homesick, or Lucifer himself appears on the field with a flaming sword and cleaves the ball in twain.5 But the Thunder keep improving, while Durant says all the right things6 and Oklahoma City cheers along. It can’t possibly last … can it?

I think it’s that grain of doubt — something’s bound to go wrong7 — that made everyone seize on the possibility of Westbrook/Durant friction during the Memphis series last season, when Durant had a bad stretch, Westbrook briefly quit passing him the ball, and Thunder coach Scott Brooks benched his point guard during a few big moments. A Thunder player anonymously muttered that “Westbrook thinks he’s a better player than Durant,” a couple of announcers got huffy, and … it never really went anywhere, because Durant scored 39 in Game 7 and everybody seemed to make up.

That conflict narrative is still lurking this season — it will be swiftly resurrected if the team struggles early and Westbrook takes some bad shots — but I don’t think it has real teeth. For one thing, what everyone seemed to overlook during the playoffs was that Westbrook actually is talented enough to carry the team for stretches, and that’s a good thing for the Thunder, not a bad thing. It’s a problem of timing and coordination — making Westbrook’s transitions in and out of Berserk Mode work with Durant’s ebb and flow, not hobbling him into some sort of meek pass-only role. For another thing, this is how Durant responded to the notion of the conflict during the fall:

We butt heads just like any other players because we are both competitive, we both want to go at it, we both have ideas. That’s going to happen. But I support him 100 percent. Of course, I hated when people were saying the stuff they were saying, and he hated it as well. I didn’t want it to get to his head. I hate when people try to creep into the group and try to break things up. I don’t want any other point guard. He’s perfect for us.

I hate when people try to break into the group and try to break things up. Of course it’s the superstar’s job to defuse conflict in a situation like this, but that’s still a very canny statement. One of the consequences of Oklahoma City’s youth, both as a squad and as a franchise, is that it’s really the first elite team to belong almost entirely to a new generation of players. There’s no preexisting team culture — whatever stray wisps of grief made the journey south from Washington don’t seem to have hung around for very long — and no core of veteran leadership teaching the kids the way things ought to be. Instead, the kids are the team.8 They’ve played practically their whole careers, including college, with Twitter and Facebook chirping away in the background;9 they saw the aftermath of The Decision up close; they grew up watching Kobe and Shaq publicly wrangle for alpha-dog status in L.A. The result is that they almost certainly have a sharper understanding of how the media works, and how storylines can wreck teams, than any previous generation of athletes. Where the squabbling stars of 10 years ago used the press to goad each other, not foreseeing or else not caring about the consequences, Durant was saying something like, We have a special situation here. We like playing basketball together. We’ve seen how media narratives can turn teammates against each other, balloon out of control, create distractions, and swallow all the oxygen around a team. We aren’t going to make that mistake. Being aware of a potentially destructive storyline doesn’t guarantee that you’ll avoid it. But knowing how those mechanics work, and having a clear sense of the rewards of not falling between the gears, will make the Thunder a fascinating experiment in self-determination — something the NBA hasn’t exactly been comfortable with lately.

There’s a good chance, in other words, that to understand what’s going on with Durant and Westbrook and the Thunder, we’re going to have to actually watch the Thunder, not just run an autocomplete on whatever preconceived trope has loaded itself on TV. Whether this cookies-and-media-savvy approach can work long-term, I have no idea. I don’t even know whether what we’re looking at is authenticity or the opposite of authenticity or some bizarre evolution that makes the whole concept of authenticity irrelevant. That’s kind of the whole point. Wherever they go from here, the Thunder are writing their own history.

Previously from Brian Phillips:
Bedlam! Squinky Dies (?)
OU vs. OSU: The Search for Squinky in Stillwater
The Commissioner After the Lockout
Justin Blackmon: An Anti-Profile
How Mario Balotelli Became MARIO BALOTELLI!!!
Tim Tebow, Converter of the Passes
Patti Smith, the Curator of Rock ‘N’ Roll