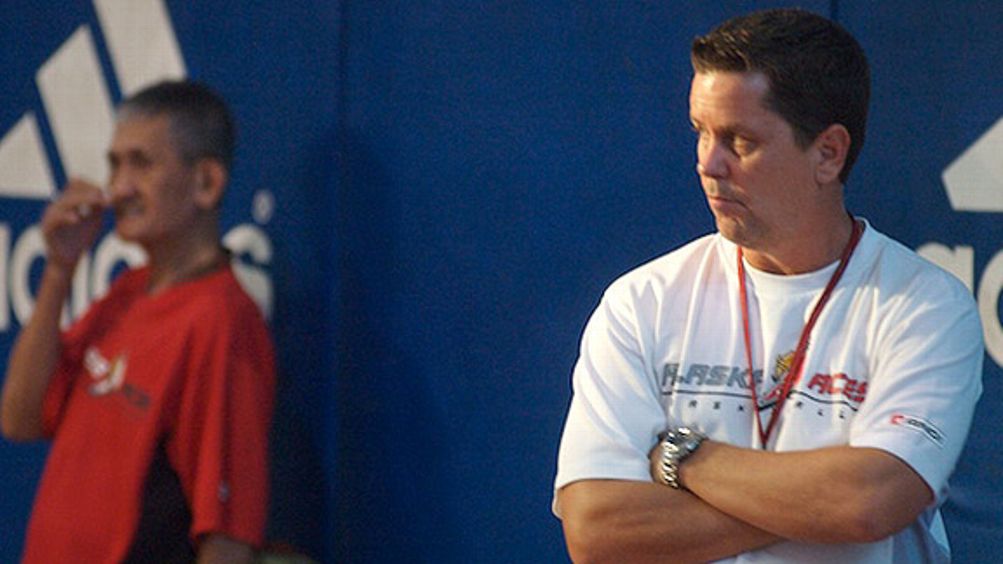 The world’s most prominent practitioner of the Triangle offense has never coached in the NBA or for a major U.S. college program. He hasn’t coached high school. He hasn’t even coached in this country. No, Tim Cone coaches in the Philippine Basketball Association. His team, the B-Meg Llamados, is owned by and named for a company that manufactures animal feed for hog farmers and cockfight breeders (indeed, llamado is the Spanish loan word for the “favorite” in a cockfight). Cone, an American who moved to the Philippines as a child, has been a PBA coach since 1989. He started teaching his team the Triangle in 1991, rode the offense to nine championships in that decade1 and has used it ever since.

When Tex Winter, the legendary architect of the Triangle, visited the Philippines in the late ’90s, he arrived at one of Cone’s practices and could hardly believe his eyes. The Filipino players, Cone recalls Winter saying, were executing the Triangle at a deeper, more advanced level than the Lakers, who were still learning the offense back then. Where Kobe and Shaq could initiate the Triangle and execute its basic options, Cone’s team was exploring fourth and fifth options and working on counters to defensive schemes that might be used to stymie the offense’s flow. Cone hadn’t been to one of Winter’s coaching clinics; this was the first time they had met. In a pre-Internet era, and in a developing nation, at that, how had Cone been able to learn Winter’s offense so comprehensively from the other side of the globe?

The answer lies in one of the great legends of Philippine basketball. In the first two years of his head-coaching career, Cone searched for an offensive system. He started off with basic motion principles, then installed set plays when he decided he wanted more control. The sets, however, turned out to be too predictable. He kept looking.

In those days, Philippine television only broadcast a few NBA games per week; those who wanted more typically had to buy Betamax and VHS dubs from local markets. In 1991, Cone caught a couple of Bulls games and noticed something intriguing. He didn’t know what they were doing, or that it even had a name, but Chicago’s offense impressed Cone. He wanted more, but instead of dusting off his Betamax machine, Cone bought a pair of enormous bunny-ear antennae, attached them to his television set, and used them to intercept broadcasts of the Far East Network, a channel that aired NBA games for the U.S. naval and air force bases north of Manila.

This is how Cone taught himself the Triangle. He taped Bulls games, watching over and over the grainy footage of Michael Jordan acting as the Triangle’s trigger man at the wing, with Bill Cartwright in the post and Scottie Pippen in the corner. He charted the players’ movements, possession after possession, keeping track of where the ball went as the Bulls reacted to different defensive schemes. At first, he didn’t understand all of the options and counters, but he began teaching it to his team, the Alaska Milkmen,2 anyway. Piece by piece, Cone unfolded the Triangle’s endless wrinkles and shared them with his players. It was a process that seemed to come straight from Hollywood — a portrait of obsessive, slightly disturbed genius, like Russell Crowe in A Beautiful Mind, or Matt Damon in Good Will Hunting. Around the time Cone learned that his offense had a name, the championships started to pile up, and thanks largely to the Triangle, Cone helped Alaska become the PBA’s team of the ’90s.

Of course, much like the Bulls and Lakers, the Triangle alone didn’t produce all those championships for Alaska. Three of the team’s starters were eventually named to the list of the greatest 25 players in PBA history. Some opposing coaches felt that Cone, for all his devotion to the Triangle, was at his best as a defensive strategist. Nevertheless, Cone, Alaska, and the Triangle became tied together in the minds of Philippine basketball fans, so much so that many people mistakenly thought that the drawing of a smiling, rosy-cheeked Caucasian lad found on cans of condensed Alaska Milk was a portrait of the preteen Tim Cone. And when Cone finally left Alaska earlier this year, there was little doubt which offense he’d be installing with his new team. “Me and the Triangle are inseparable,” Cone told a local news outlet.

Cone’s team has been successful — they earned the top seed for the playoffs of the PBA’s first conference — but not necessarily because of the Triangle. “We’re just playing good defense and playing through our talent offensively,” Cone told me last week. He remains confident, however, that his players will internalize the Triangle over time, and when they do, the “sky will open up” and the offense will bloom.

But as the ripples of Jackson’s retirement cross the Pacific and reach Philippine shores, the Triangle’s decline in NBA circles may make it difficult for Cone to continue preaching basketball’s Gospel according to Tex. The PBA was modeled on the NBA, and its coaches, players, and fans have always looked to the American league for inspiration. For the past two decades, Cone has been able to use Jackson and Winter’s success with the Bulls and Lakers to deflect Triangle skeptics. In the Philippines, where practically everyone loves basketball (and those who don’t love the game at least understand it) and seemingly everyone has a relative living in Southern California, saying “We run the same offense as Phil and Kobe” was always good public relations.

Now, for the first time in his career, Cone can’t point at an NBA champion coach to justify his offensive philosophy. As long as Cone keeps winning, he’ll need no other justification. But if his squad hits a slump, he’ll be out on his own in a basketball world that has mostly turned against his offense of choice.

“I’m worried that I don’t have a Triangle coach to follow anymore,” Cone told me in August, the last time I visited Manila. Such is the new reality for the Triangle offense’s last coach standing.